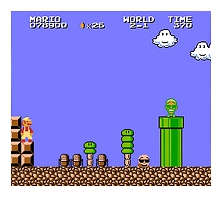 “Super Mario Bros. is a video game released by Nintendo in late 1985 for the Nintendo Entertainment System. Universally considered a classic of the medium, Super Mario Bros. featured bright, expansive worlds that changed the way video games were created. Often wrongly credited as the first scrolling platform game (there are at least a half dozen earlier), it is the first console original in this genre to feature smooth-scrolling levels, which made it a landmark in home videogaming. Super Mario Bros. is listed in The Guinness Book of World Records as the best-selling video game of all time,[1] and was largely responsible for the initial success of the Nintendo Entertainment System, as well as ending the two year slump of video game sales in the United States after the video game crash of 1983. It has inspired countless imitators and was one of Shigeru Miyamoto’s most influential early successes. The game starred the Italian plumber Mario and his slightly younger brother Luigi, the former who would eventually become one of Nintendo’s most well known mascots. The game was succeeded by a direct sequel in Japan (later retitled in North America), and by Super Mario Bros. 2, a Mario-themed port of Doki Doki Panic, elsewhere in the world.”