Check out the new video netcast!

Two versions of the Internet craze, “The Evolution of Dance!” Pretty cool!

This Weekend’s Podcast Has Issues…

Yep… I lost my audio somewhat during recording the podcast… so you get to here me humming along halfway through the Jonathan Coulton song “The Presidents.” It was like my virtual “mixer” lost the channel that played the songs, bits, etc. and you then only heard my mic recording (even when I had it “off”) … actually, my wife, Belinda, thought it was hilarious! Anyway, no sooner had I posted it to the net… within about two minutes… I got an email from Henry Ratliff, one of my Internet buddy’s and a faithful listener, who said, “Hey, Doc, ya got a problem!”

So, I recorded a mini-podcast to get the full Jonathan Coulton song… it is available here:

Click on the “Streaming MP3” badge below to play Streaming Audio of this Podcast.

Also… for the rest of the original podcast… the audio is wonky. Don’t ya love it!?

Dr. Bill shows us two versions of the ‘Evolution of Dance!’

The “I Got No Geek Software of the Week Edition” of Dr. Bill Podcast #129

Geek Culture from Jonathan Coulton… Code Monkey and The Presidents, Satellite Radio merger, the demise of the ORDB, OpenOffice 2.4, Miro fund-raiser and Google and “Lights Out Day!” 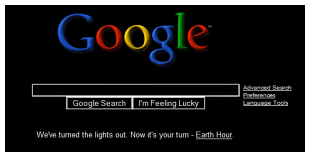 Sigh. The environmentalist wackos are getting to everyone. Check out what Google has done to their home page and logo for “Lights Out Day.”

Ah well… that’s cool… more power for the rest of us! 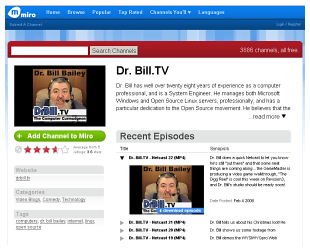 The Miro Project is having a fund raiser! “Whoopie.”, you say. Well, I just contributed some of my hard earned cash to it. Why? Well, I support the idea of community driven “Open Source,” if you will, Internet TV! If you haven’t checked out the Miro IPTV player, go here:

If you are looking for shows and content go here:

And while you are at the Miro Guide, type in “Open Source” in the “Channel Search” bar, and scroll down the page! Look familiar? Yep, Dr. Bill.TV is on Miro! Join the IPTV revolution and spread the word about Miro!

And, if you want to contribute, as I did, click the link below!

OpenOffice.Org 2.4 is Out – With New Features!

Check it out! How cool is this?

With all the commercials, how could they not know? But, some are still clueless! Hard to imagine if you are a techno-lover like myself, but, maybe we’re talking the sun-enhanced back-of-the-neck crowd. (Ahem!) Anyway, if you didn’t know… the biggest change is coming to TV since color was introduced (sad to say, I remember, that one as well!) So, get ready for Digital TV!

Survey: 6 in 10 Americans know about the DTV transition

“As late as February of this year, only 59 percent of Americans were aware of next year’s slated transition from analog to digital TV, according to a survey by Frank N. Magid Associates. With the change about to happen on February 19, 2009, these results show a big jump from a similar survey by the same company six months before, when merely 34% of Americans had heard about the transition. Still, though, 41% remain totally clueless about the pending advent of digital-only TV. The findings were slightly better, actually, among ‘over-the-air-only’ households that only have analog TV sets without cable or satellite service. In those households, only 37% were unaware of the transition. Also on a relatively positive note, a similar survey undertaken by Consumer Reports in January showed that only 28% of those with at least one analog TV set were completely unaware of the upcoming change to digital. But Magid’s survey results also came up with the alarming finding that the proportion of Americans who erroneously believe the transition means ‘all TV programs will be available in high definition’ actually rose from 23% to 29% in the six months between Magid’s two polls.”

If You Use The Open Relay DataBase… STOP!!!

If you have your email or email server set up to use ordb.org (The Open Relay DataBase) … UNSET it! Having it set up in my sendmail settings hosed my email tonight. If you sent me something, I may not have gotten it… sigh! It went down (The Open Relay DataBase) in December… but, for some reason, it is affecting me now. anyway, a word to the wise… take the reference out of your email server settings!

The Justice Dept. Has Approved the Merger of Sirius and XM Satellite Radio!

Who’d “thunk” it? With only two satellite radio companies out there, who would have thought that they would approve of this merger?

The US Justice Department has approved the merger between XM and Sirius satellite radio services, stating that it could not find any evidence that the combination would substantially reduce competition. In what has seemed like an eternity, the first steps towards a single satellite radio entity began Monday as the DOJ approved the $13 billion deal. XM and Sirius first announced their ‘merger of equals’ last February, with Sirius’ Mel Karmazin assuming the role of CEO, and XM’s chairman Gary Parsons taking the chairman’s position. The two companies had hoped at the time to finish the merger by the end of 2007. However, both the Justice Department and the FCC took their time in studying the merger — even causing the two sides to extend the agreement through May 1 (it was set to expire in February). Broadcast industry groups such as the National Association of Broadcasters had voiced their opposition to the deal, saying it was anti-competitive. In its defense the two companies argued that since satellite radio’s creation, the entertainment industry had changed. Satellite radio was now competing with devices such as music players and other entertainment devices, they claimed. From the DOJ Antitrust Division’s statement, it appears as if regulators agreed, adding other factors played into their decision. The reasons for the approval included ‘a lack of competition between the parties in important segments even without the merger; the competitive alternative services available to consumers; technological change that is expected to make those alternatives increasingly attractive over time; and efficiencies likely to flow from the transaction that could benefit consumers,’ according to the statement.”