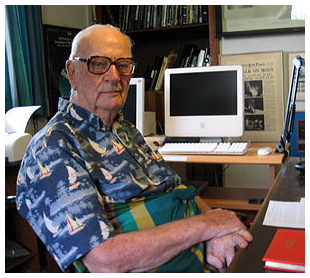 One of the great “hard science” science fiction writers passed away today… Arthur C. Clarke. He wrote science fiction that had a lot of clear, exacting science fact in it, that made his flights of fancy more believable. He was also credited with the “invention” of the earth orbiting satellites that make the communications that we take for granted today, possible. He will be missed.

“Arthur C. Clarke, a writer whose seamless blend of scientific expertise and poetic imagination helped usher in the space age, died Wednesday in Colombo, where he had lived since 1956. He was 90. The author of almost 100 books, Clarke was an ardent promoter of the idea that humanity’s destiny lay beyond the confines of Earth. It was a vision served most vividly by ‘2001: A Space Odyssey,’ the classic 1968 science-fiction film he created with the director Stanley Kubrick and the novel of the same title that he wrote as part of the project. His work was also prophetic: His detailed forecast of telecommunications satellites in 1945 came more than a decade before the first orbital rocket flight. Clarke’s influence on public attitudes toward space was acknowledged by U.S. astronauts and Russian cosmonauts, by scientists like Carl Sagan and by movie and television producers. Gene Roddenberry credited Clarke’s writings with encouraging him to pursue his ‘Star Trek’ project in the face of indifference from television executives. In his later years, after settling in Ceylon (now Sri Lanka), Clarke continued to bask in worldwide acclaim as both a scientific sage and the pre-eminent science fiction writer of the 20th century. In 1998, he was knighted by Queen Elizabeth II. Clarke played down his success in foretelling a globe-spanning network of communication satellites. ‘No one can predict the future,’ he always maintained. But as a science fiction writer he could not resist drawing up timelines for what he called ‘possible futures.’ Far from displaying uncanny prescience, these conjectures mainly demonstrated his lifelong, and often disappointed, optimism about the peaceful uses of technology – from his calculation in 1945 that atomic-fueled rockets could be no more than 20 years away to his conviction in 1999 that ‘clean, safe power’ from ‘cold fusion’ would be commercially available in the first years of the new millennium.”

My early science fiction habit was cut on books by Arthur C. Clarke, Issac Asimov, and Larry Niven. To know that Sir Arthur was also an inspiration to Gene Roddenberry to develop Star Trek ties him even more to my favorite avocation of reading Star Trek books, and enjoying the latest versions of Star Trek lore, like Star Trek Phase II (formerly Star Trek: New Voyages.)