“The Doctor Gets Beeped Edition” of Dr. Bill Netcast #181

VirtZine, the On-Line Magazine of Virtualization and Cloud Computing!

“Just when we thought Duke Nukem Forever would finally hit an expected release date, the title has once again been delayed. According to the game’s developer, Gearbox Software, the long-awaited title has been pushed back a month and will now launch on June 10 internationally and on June 14 in North America. It will be available for the Xbox 360, PlayStation 3, and PC.

Duke Nukem Forever allows players to control the brash character as he saves the world from ‘pig cops, alien shrink rays, and enormous alien bosses.’ Like previous Duke Nukem releases, the title will be irreverent in every sense of the word and appeal to adult audiences that are looking for ‘catchy one-liners that will make your mama blush, and frantic, bone-shaking action sequences that will simultaneously rock your world and your neighbors’ walls.’

The title has been a long time coming. It was first announced in April 1997 as a follow-up to Duke Nukem 3D.”

Geek Software of the Week: YUMI from PenDriveLinux! 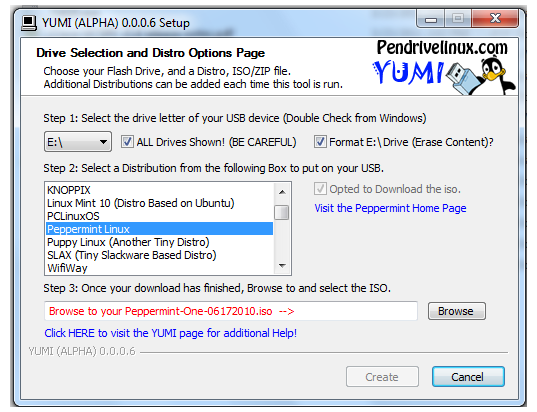 Have you ever wanted to try Linux distros just to see what they were like, and you wanted to put it on your USB drive? Is that what you want? Well, it is EASY now, with PenDriveLinux’s YUMI!

“YUMI (Your Universal Multiboot Installer), is the successor to MultibootISOs. It can be used to create a Multiboot USB Flash Drive containing multiple operating systems, antivirus utilities, disc cloning, diagnostic tools, and more. Contrary to MultiBootISO’s which used grub to boot ISO files directly from USB, YUMI uses syslinux to boot extracted distributions stored on the USB device, and reverts to using grub to Boot Multiple ISO files from USB, if necessary.

Aside from a few distributions, all files are stored within the multiboot folder, making for a nicely organized Multiboot Drive that can still be used for other storage purposes.”

Why NOT to do Flash Only Web Sites!

Flash on the web is cool. BUT, I have long said that is you want to get indexed and be in the Search Engines, Flash web sites are NOT the way to go. This article ‘splains it really well!

The Truth About Search Engines and Flash

Check it out… this link is a printable version. Read it, believe it, take it to heart!

And, I got the free download of “Angry Birds – Rio” – now, I am playing Angry Birds at every spare moment! This is how they plan to take over the world! With Angry Birds!

“Amazon officially opened its new and much-anticipated Android app store today. Serving up a round of competition to Google’s Android Market, Amazon’s Appstore for Android is stocking almost 3,800 apps for starters, with more on the way. To kick off the store opening, Amazon is giving away a free copy of Angry Birds Rio and is promising to offer one paid app for free each day.

But the Amazon shop is opening amid controversy. Apple yesterday sued Amazon over the use of the term ‘App Store,’ for which Apple filed a trademark after the release of the iPhone 3G. Apple is contending that use of the term could ‘confuse and mislead customers.’ Lawyers will surely make note of the fact that Apple uses the term as the two-word phrase ‘App Store,’ while Amazon has tweaked it slightly to the one word “Appstore,” perhaps in an attempt to distinguish it.

Amazon’s launch of its Appstore for Android comes at a time when Google’s own Android Market has been facing some challenges, notably in the area of security. Google recently was forced to pull 50 different malware-infected apps that were masquerading as legitimate programs, calling into question the processes that the company uses to allow apps in its mobile store.”

Dr. Bill.TV is Now Available on Roku via Blip.TV!

I have been on Roku already via Techpodcasts.com and Blubrry.com, but Blip.TV approved me for Roku distribution for me as well! Cool!

Firefox at 6.7 Million Downloads and Counting!

Mozilla has a download tracker set up that tracks not only the number of downloads, but what region, city, etc. that they are being downloaded from! Looks like folks are “jumping on” the new version… I am just glad that people are moving to “modern browsers,” whether they are downloading IE9, Firefox 4, or Chrome! That is good for the web at large!

Firefox 4 is Out, But it is Still no Chrome!

OK, I downloaded Firefox 4, I installed it. It does seems faster… but it is still not as lean and fast as Chrome. I used to be the Mozilla Firefox promotion fiend! Dewd! I told EVERYBODY to use Firefox. But for me, Google Chrome just plain rocks! So, I would recommend you download it and try it for yourself, but, for me, it is still Chrome.

VirtZine, the On-Line Magazine of Virtualization and Cloud Computing!