Geek Software of the Week: andLinux!

How would you like to able to run Linux software (designed to run on Linus ONLY) within Windows? Now you can… this could almost be a Linux GSotW, but since it runs in Windows, we’ll just double categorize it!

“andLinux is a complete Ubuntu Linux system running seamlessly in Windows 2000 based systems (2000, XP, 2003, Vista, 7; 32-bit versions only). This project was started for Dynamism for the GP2X community, but its userbase far exceeds its original design. andLinux is free and will remain so, but donations are greatly needed.

andLinux uses coLinux as its core which is confusing for many people. coLinux is a port of the Linux kernel to Windows. Although this technology is a bit like running Linux in a virtual machine, coLinux differs itself by being more of a merger of Windows and the Linux kernel and not an emulated PC, making it more efficient. Xming is used as X server and PulseAudio as sound server.

andLinux is not just for development and runs almost all Linux applications without modification.”

“A research firm posted an IQ test on its Web site and then compiled the results from more than 100,000 users.

It found that there was no substantial difference between users of Chrome, Firefox, Safari, and Opera.

But Internet Explorer users had IQs below average.

That’s a switch from five years ago, when IQs were more or less the same across all browsers.

The company, Aptiquant, bills itself as a “psychometric consultant.” Its main business is creating tests to help businesses hire well.

Now before all you Opera users get too satisfied with yourselves, there are lots of possible reasons why IE users scored so low:

IE has about twice the installed base of any other browser, so IQs are more likely to tend toward the mean.

IE is the default browser of 95% of people who don’t know how to download and install a new browser, which drags down the average. (Mac users in this boat stick with Safari.)

People who use other browsers include a disproportionate number of computer geeks, which brings their averages up.

Online IQ tests — or IQ tests in general — are silly. 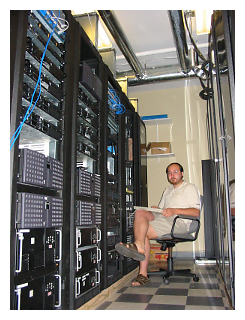 Today is the 12th Annual celebration of System Administrator Appreciation Day! Say something nice about your System Admin!

“A sysadmin unpacked the server for this website from its box, installed an operating system, patched it for security, made sure the power and air conditioning was working in the server room, monitored it for stability, set up the software, and kept backups in case anything went wrong. All to serve this webpage.

A sysadmin installed the routers, laid the cables, configured the networks, set up the firewalls, and watched and guided the traffic for each hop of the network that runs over copper, fiber optic glass, and even the air itself to bring the Internet to your computer. All to make sure the webpage found its way from the server to your computer.

When the email server goes down at 2 AM on a Sunday, your sysadmin is paged, wakes up, and goes to work.

A sysadmin is a professional, who plans, worries, hacks, fixes, pushes, advocates, protects and creates good computer networks, to get you your data, to help you do work — to bring the potential of computing ever closer to reality.

So if you can read this, thank your sysadmin — and know he or she is only one of dozens or possibly hundreds whose work brings you the email from your aunt on the West Coast, the instant message from your son at college, the free phone call from the friend in Australia, and this webpage.”

I got an email today. It had a subject line of: Computer Operator II Needed in Winston-Salem, NC. Okay. I read the message. The recruiter said that I might be interested in a computer operator position. There was a requirement of at least a Bachelors degree. I started laughing… best laugh of the day… then, I was perplexed. Should I let her know how far off the mark she was with her email? What if she offered it to other high end computer professionals… so, I responded as below:

“Your message gave me a good laugh! Have you even read my resume? I have over 30 years of system admin experience and I’m professionally certified in VMware, Citrix, and web server administration… and you send me a computer operator position? Maybe back in 1984, but I am a little further down the road by now. I also have two doctorates, a Ph.D and and ND; so the Bachelors degree preference should be no problem.

I mention it only because you might send a similar message to someone with a less developed sense of humor. BTW, I am NOT looking for work. Thanks for thinking of me, though!

So, obviously, I was jabbing a bit… but what do you think? Too much?

Gotta love this! Microsoft buying Linux support! How cool is that?!?!

“Linux vendor Novell Inc. is no longer a standalone company, but Microsoft today announced an agreement with its successor, Attachmate’s SUSE unit, to extend by four years the technology collaboration agreement and controversial patent protection deal that the companies announced nearly five years ago.

As part of the extended agreement, Microsoft agreed to spend an additional $100 million on support certificates for SUSE Linux Enterprise, as a way of helping customers run both Windows and Linux servers. Microsoft and SUSE say their collaboration has served more than 725 customers worldwide to date.

Under their pact, the companies agreed to not to sue each other’s customers for patent violations. That provision was criticized in the open-source community as an implicit concession by Novell that Linux violates Microsoft’s patents, although Novell executives said repeatedly that wasn’t the case.”

New Roku 2 boxes: we are giving one away! Byte Magazine is back! Star Wars: The Old Republic available for pre-order! GSotW: Gabby! Will Apple buy Hulu? Who else might? What about Google+? GoToAssist: https://bit.ly/jw3Y7y Carbonite: https://bit.ly/carbtpn

Are you “biting?” Google+ pulled in 20 million users in three weeks. There does seems to be “a buzz!” I have a Google+ account, but haven’t really played with it much yet. We’ll see. I was a reluctant Facebook user, and I still only check it occasionally, but it is a bit more “comfortable” at this point… but as with everything else, there is always a “learning curve.” So, we’ll see! Maybe I will drink the Google Kool-Aid yet!

IPTV as an industry is heating up! Now there is a rumor that Apple may be negotiating to buy Hulu!

“Apple Inc. (AAPL), with $76.2 billion in cash and securities on its books, is considering making a bid for the Hulu online video service, two people with knowledge of the auction said.

Apple, the world’s second-most-valuable company, is in early talks that may lead to an offer for Hulu, said the people, who weren’t authorized to speak publicly.

‘Part of the ecosystem of Apple’s future is to include more video,’ said Scott Sutherland, Wedbush Securities Inc. analyst in San Francisco who recommends buying the stock. ‘It’s something they are focused on.’

Meredith Kendall, a spokeswoman for Los Angeles-based Hulu, declined to comment, as did Tom Neumayr, a spokesman for Cupertino, California-based Apple.

Hulu’s price tag could exceed $2 billion, according to data compiled by Bloomberg and SNL Kagan.”

Although, Peter Kafka at “All Things D” seems to disagree with this rumor!

Don’t Hold Your Breath on That Apple Hulu Deal

He says that even though Apple is considering it, others are more likely buyers:

“And there are still some smart folks who think the pool of real bidders for the site may end up being very, very shallow. A quick guide to some of the usual suspects:

Apple could certainly afford to buy Hulu at any price, since its ever-growing cash pile is now at $76 billion. And the company has already shown an interest in the subscription TV business that Hulu Plus sells — recall its efforts to cobble together a $30-a-month video service. But the free ad-supported business that makes up Hulu’s core is pretty alien to Apple.

Industry folks I talk to think Google would love to get its hands on Hulu, and none of them think the company will make an offer. The search giant is already facing a wide-ranging antitrust probe, and adding an exclusive deal for three of the four broadcast TV guys to the mix seems like a nonstarter.

Amazon is a logical buyer: Adding Hulu would make a lot of sense for a company that’s trying to jump-start its online video business. The problem here is that content sellers say that Amazon seems wholly uninterested in paying anything close to a premium for online video.

Lots of people in and outside of Yahoo would like Carol Bartz to buy Hulu, so this one seems most logical. The question is whether Yahoo’s board will approve what would be a Hail Mary deal.

Other possible homes for the site include Verizon and AT&T, as well as Liberty Media/DirectTV. The last one has particular appeal to some folks I talk to, who see Hulu as a natural extension of the satellite TV company’s existing business plan.” 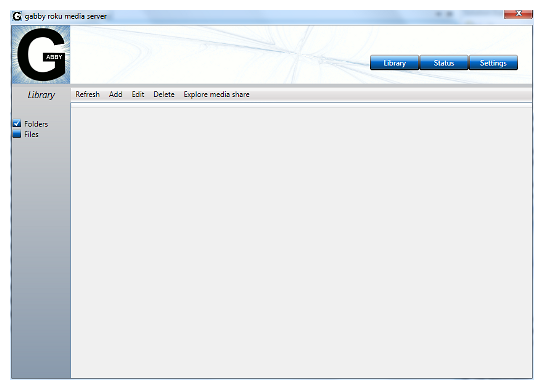 Since we are doing a giveaway of a brand new, fresh in the box, Roku 2 to some fortunate viewer of Dr. Bill.TV, I found a great Geek Software of the Week to tie into the Giveaway!

The Geek Software of the Week this week is: Gabby Roku Media Center! Gabby is designed to give users the freedom to view content on their own networks! In other words, you can set up Gabby, and then view your photos, listen to your MP3 collection, and watch your videos, from your own local (LAN based) PC system! Simply install the Gabby Server on your local PC, set up the Gabby Channel on your Roku, then enter the code to associate the two, and you have local access from your PC to your Roku! Awesome! I will have a big overview of this process (very simple to do) on teh next Dr. Bill.TV Netcast! 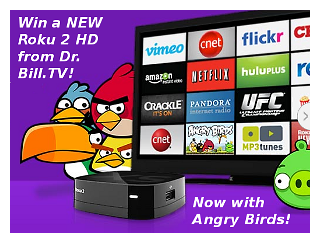 Yes, you read that right! You can register to WIN a new Roku 2 HD from Dr. Bill.TV! Just compose an email, with the subject line “Roku 2 Giveaway” and send it to: DrBill [AT] DrBill.TV. (Replace the [AT] with an “@” sign, of course!)

This is the BRAND NEW, just released Roku 2 HD, with: