We will have no Dr. Bill.TV show this week, due to the press of work related activities this week. Also, I have had to work nearly all day today (Sunday.) So, I encourage you to watch this very special edition of the VirtZine Netcast!

Start the Video Netcast in the Blubrry Video Player above by
clicking on the “Play” Button in the center of the screen.
(Click on the buttons below to Stream the Netcast in your “format of choice”)
(Right-Click on any link above, and select “Save As…” to save the Netcast on your PC.)
Available on YouTube at: https://youtu.be/zrke9pbbDQU
Available on Vimeo at: https://vimeo.com/101238911

Start the Video Netcast in the Blubrry Video Player above by
clicking on the “Play” Button in the center of the screen.
(Click on the buttons below to Stream the Netcast in your “format of choice”)
(Right-Click on any link above, and select “Save As…” to save the Netcast on your PC.)
Available on YouTube at: https://youtu.be/zrke9pbbDQU
Available on Vimeo at: https://vimeo.com/101238911

Google Chromebooks Are a Big Deal in Education

Schools are choosing Chromebooks because they are inexpensive, and versatile!

With 1M Sold In The Last Quarter, Google’s Chromebooks Are A Hit With Schools

TechCrunch – by Frederic Lardinois – “During its earnings call this week, Google announced that it — and its partners — sold a million Chromebooks to schools in the last quarter. Overall PC sales worldwide were about 76 million in the last quarter, according to Gartner’s latest numbers, so a million Chromebook sales just to the education market is a pretty good number.

In the early days of Chrome OS, it often seemed like a doomed project. Who, after all, would want to buy a laptop that would just run a browser? Google has one big advantage, though. It’s massive advertising income allows it to stick with projects, even if they don’t catch on right away. As web apps developed, Chromebooks started to get significantly more useful, and these days, when you can do almost everything on the web (and yes, I know Photoshop isn’t one of those things), only having access to web apps really isn’t such a big deal anymore.

A lot of schools were sold on iPads right after those became available and students probably still prefer them over Chromebooks, but they are relatively expensive compared to Chromebooks and harder to manage. Google also offers admins easy ways to manage large Chromebook deployments from a single console while Apple is still catching up when it comes to this.

At its I/O developer conference last month, Google quietly announced that it was expanding its Google Play for Education app and e-book store from Android tablets to Chromebooks, too. That announcement didn’t get a lot of hype, but it’s a huge deal for Google’s push into the education market and for the schools that have bought into this ecosystem.

As Rick Borovoy, Google’s product manager for Google Play for Education, told me back then, many schools deploy both tablets and Chromebooks for their students.

Apple has always been very strong in the educational market, but even though its hardware is arguably superior, it’s also much more expensive. And as long as U.S. schools have to hold bake sales to raise funds, a $200 Chromebook is simply within reach for more of them.

Microsoft, of course, has long been aware of Google’s push, too. It loves to make fun of Chromebooks (remember its Pawn Stars ad?), but the fact that it does so only means it is aware of the threat Google poses in the lucrative education and enterprise markets. It’s now making a counter-push with low-end, low-priced laptops, but while price definitely matters, Microsoft doesn’t have the full ecosystem available that has made Chromebooks so popular in schools. While it offers plenty of apps for textbooks, for example, Google lets schools fund a Google Play for Education account for teachers that allows them to easily buy apps and books for their whole class and for individual students.

Microsoft and Apple should be concerned about Google’s success in schools. Once students get used to working with Google’s products, after all, they are likely to stick with them as they grow older. Apple and Microsoft used to play this game very well with its discounts for schools, but it feels like Google has clearly learned from this and is now a real challenger in this space.” 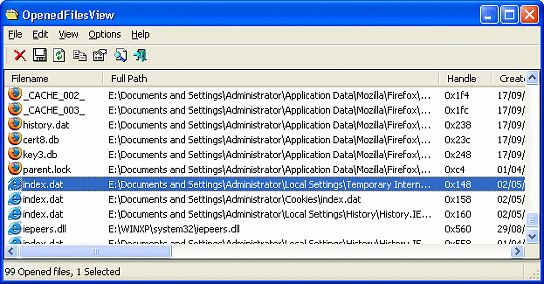 Another neat Nirsoft goodie for you! Find those locked files on your system!

“OpenedFilesView displays the list of all opened files on your system. For each opened file, additional information is displayed: handle value, read/write/delete access, file position, the process that opened the file, and more…

Optionally, you can also close one or more opened files, or close the process that opened these files.

This utility is especially useful if you try to delete/move/open a file and you get one of the following error messages:

When you get one of these error messages, OpenedFilesView will show you which process lock your file. Closing the right process will solve this problem. optionally, you can also release the file by closing the handle from OpenedFilesView utility. However, be aware that after closing a file in this way, the program that opened the file may become unstable, and even crash.”

Chrome can be a bit of an energy hog, but it sounds like help may be on the way!

Chrome’s been eating your laptop’s battery for years, but Google promises to fix it

PCWorld – By: Jared Newman – “Google is just now responding to a bug in Chrome for Windows that may have been sapping users’ batteries for years.

Chrome’s battery drain problem was brought to wider attention by Forbes contributor Ian Morris, who noticed that Chrome for Windows was using considerably more power than other browsers.

The issue, he wrote, is that Chrome doesn’t return the system’s processor to an idle state when it’s not doing anything. Instead, Chrome sets a high ‘system clock tick rate’ of 1 millisecond, and leaves it at that rate, even if the browser’s just running the background.

By comparison, Microsoft’s Internet Explorer only ramps up the tick rate for processor-intensive tasks such as YouTube, and otherwise returns it to the default rate of 15.625 milliseconds. According to Microsoft, setting the tick rate consistently at 1 millisecond can raise power consumption by up to 25 percent depending on your hardware configuration.

This bug wouldn’t be too surprising if it was introduced in a recent update. But according to Morris, the first report of it popped up in 2010, and a more recent bug report in Chromium has been racking up new comments since November 2012. So if your Windows laptop isn’t getting the battery life you’d expected, it’s possible that Chrome is the culprit.

In any case, the new reports have finally gotten Google’s attention. In a statement to PCWorld, the company noted that the bug has been assigned internally, and that the Chrome team is working to fix it—though only after Morris shined a spotlight on the issue. The long-standing bug report has been bumped up to priority one.

In the meantime, consider shutting down Chrome when you’re not using it on your laptop, or trying out a different browser.”

I think I might just go for this one… especially as many Star Trek books as I read!

Engadget – By: Matt Brian – “After teasing us with a possible launch, Amazon has confirmed Kindle Unlimited, its all-you-can-read e-book subscription service. For $9.99 per month, Kindle Unlimited offers 600,000 books and ‘thousands’ of audiobooks across a range of devices. As expected, many of the major publishers aren’t fully represented, but there are number of popular titles listed, including Harry Potter, Lord of the Rings and the Hunger Games, as well as a whole catalog of Kindle exclusives. Like Prime, Amazon initially offers a free 30-day trial to draw you in, but it’s also throwing in a three month subscription to Audible and access to 2,000 audiobooks via its Whispersync service (which lets you seamlessly switch between reading and listening whenever the mood takes you). For a service that bills itself as ‘unlimited,’ there’s a few constraints on Amazon’s Netflix-for-books service. In addition to the fact that it doesn’t have the support from all of the major publishers, of course, there’s also the small matter that it’s only available in America. At least, for now.”

Check out this video. This looks very cool!

Peppermint 5, a desktop that integrates your ‘Cloud’ usage, Dropbox update with streaming sync, Microsoft will pull the plug on free Windows 7 support, GSotW: WhatInStartup, did the CW intentionally leak the pilot of the Flash? Google Glass and MindRDR.

Start the Video Netcast in the Blubrry Video Player above by
clicking on the “Play” Button in the center of the screen.
(Click on the buttons below to Stream the Netcast in your “format of choice”)
(Right-Click on any link above, and select “Save As…” to save the Netcast on your PC.)
Available on YouTube at: https://youtu.be/OClBWLwCphE
Available on Vimeo at: https://vimeo.com/100609015

Peppermint 5, a desktop that integrates your ‘Cloud’ usage, Dropbox update with streaming sync, Microsoft will pull the plug on free Windows 7 support, GSotW: WhatInStartup, did the CW intentionally leak the pilot of the Flash? Google Glass and MindRDR.

Start the Video Netcast in the Blubrry Video Player above by
clicking on the “Play” Button in the center of the screen.
(Click on the buttons below to Stream the Netcast in your “format of choice”)
(Right-Click on any link above, and select “Save As…” to save the Netcast on your PC.)
Available on YouTube at: https://youtu.be/OClBWLwCphE
Available on Vimeo at: https://vimeo.com/100609015
1 2 3 »