Android L devices will be ‘NSA-Proof,’ at least we hope so, the Hamster Wheel Standing Desk kit, Comic Book TV shows are coming, GSotW: Partition Manager 2014 Free Edition, a video of an Apple fan that buys an iPhone 6, and then promptly drops it!

Oops! I Dropped my New iPhone 6!

cNet – By: Don Reisinger – “For Apple fans who wait in line for hours, if not days, to buy a new iPhone, there’s no greater fear than dropping the prized possession they waited so long for. But that’s exactly what happened to one man in Australia.

Early on Friday, Jack Cooksey was first in line at an Apple store in Perth, Western Australia. After the doors opened and he purchased an iPhone 6, he ecstatically showed it off to a local news channel. During the interview, Cooksey appeared to have some trouble opening the iPhone 6 box. As he popped off the top — perhaps getting a little too excited to see Apple’s latest iPhone — the brand new iPhone 6 fell to the pavement below.

For a moment, there was a gasp (and laughter) in the crowd surrounding Cooksey. Quick on his feet, he bent down, picked up the handset and discovered, much to his relief, that it survived the scary fall.

The entire event, which was caught on live television, was likely one of the first iPhone 6 drops in the world. Thanks to Australia’s time zone, Apple fans in the country are some of the first in the world able to get their hands on the iPhone 6 and iPhone 6 Plus.

The comedic drop was set against the backdrop of what could be one of the biggest iPhone launches in Apple’s history. Apple announced the 4.7-inch iPhone 6 and the 5.5-inch iPhone 6 Plus at an event on September 9. Last Friday, the company kicked off preorders of the two iPhones and sold 4 million units in the first 24 hours, setting a new preorder record.

Apple stores opened at 8 a.m. local time around the world on Friday. Other retailers and carrier stores are also carrying the devices. It’s expected that stock will be tight.” 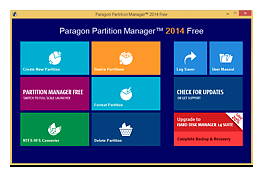 Do you have partition issues? Then try this week’s GSotW to fix your hard drive!

“Partitioning is not for amateurs. That is why millions of people have trusted our safe, stable technology and professional software solutions for over 19 years. Our latest 2014 version easily organizes your hard drive and redistributes free space to enhance system performance.

Easy execution of key scenarios:
Organize your hard drive and gain additional space in your existing partitions
Simplify the backup process by separating your data from your operating system
You can install several operating systems on separate drive partitions”

Comic TV Shows Are Exploding On the Scene!

There’s a lot of comic book heroes and adventures being developed in the TV shows that will air over the next two years. We already have “Arrow,” which is based on DC Comics “Green Arrow,” and this year they’re adding “The Flash,” produced by the same creators and developers of Arrow.

Other companies are developing properties such as Luke Cage, Daredevil, the Defenders, and another comic book “hero,” and yes, I put that in quotes, because he isn’t exactly a clean-cut superhero, and that is Constantine. It’s a little harder core that most of the other comic book adventures will be, after all, a hero that has demon’s blood in his veins and uses dark magic to pursue those that he goes after, can’t be considered exactly a “good guy.” 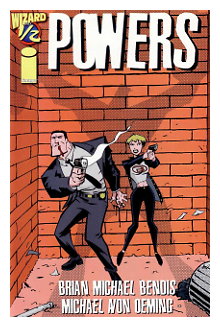 And, based on all the interest in zombies in recent years, the CW is bringing “i-Zombie” out which will be about a med student turned zombie who takes a job in the coroner’s office to gain access to the brains she must reluctantly eat to “live.” And I used “live” in the broadest sense!

There is also a project called “Powers” where we have two police detectives living in a world where there are superheroes and super villains. Needless to say this is one I’m going to have to check out before I commit to watch it!

Also, they are working on a “Supergirl” one hour TV show. I am looking forward to that one!

So, we’re going from only a few comic book-based stories to quite a few, however, that’s usually the way it works as things become successful they start having imitators of that success. At least that’s what they hope!

Now you can build your own hamster wheel standing desk. Yeah. And the psychology of reminding yourself that you are “on a treadmill” while at work. Priceless.

We are, correctly, becoming more and more security conscious, and Google is stepping up to the challenges.

Google: Android L devices will be “NSA-Proof” out-of the box

Having revealed how much information the NSA is privy to on personal mobile devices, Snowden has motivated tech companies Apple and Google are leading the way to prevent the NSA tactics that have allowed the federal agency to collect as much information on personal uses as it wants.

Apple, on the hit success of the iPhone 6 launch and sale this week, has said that iOS 8 will prevent the NSA from obtaining information the easy way. Now, search engine giant Google has joined the mix, stating that Android L will bring a feature to the forefront that, to date, has been available on Android devices but has remained an optional preference for consumers.

Google intends to encrypt data on all devices that run and receive the Android L update. As a result, only user passwords will grant access to user data. Not even police warrants will be able to access user data without user permission. While Google’s next big update is scheduled to arrive around October-November, it should also be pointed out that the data encryption will not prevent Google Hangouts text messages and chats from being intercepted by NSA tactics. The data encryption will occur for all other information on any Android smartphone and tablet, however, scrambling data so that it is not accessible by way of hackers.

Android L (still unnamed) has been said to have ‘Lollipop,’ ‘Lemon Meringue Pie,’ ‘Lemon Cake,’ and even ‘Lion’ (a Nestle treat) as potential names. Google has named its Android updates since purchasing the OS from Andy Rubin after desserts: Cupcake, Doughnut, Éclair, Froyo, Gingerbread, Honeycomb, Ice Cream Sandwich, Jelly Bean, and KitKat. Recent results show that KitKat is growing in user base but that some devices still bear Froyo and Gingerbread as Android consumers use their smartphones beyond contract expiration dates.

Apple has called out Google for selling user data to the NSA, so it’s nice to see Google fighting the NSA on this one. Whether or not the NSA will have trouble ‘forcing’ users to hand over user passwords is another story entirely. Google has been accused in an antitrust issue of relaying people to its own answers on Internet searches to grab money from mobile ads.

Google is expected to have an HTC Nexus 9 in the works, with HTC planning to announce the new 8.9-inch tablet on October 8 and sales to commence on October 16. Google is also rumored to have a Motorola Nexus in the works as well, with the name of the device (Nexus 6 or Nexus 5.2, Nexus 5 –Second Edition) still up for debate.”

The New, Larger iPhone 6 Plus Has Sold Out! 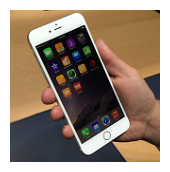 Larger iPhone 6 Plus Sells Out, ‘Record Number’ of iPhone Pre-orders

There were the usual reports of challenges ranging from sites not loading to error messages, with clear indications that plenty of phones were being ordered.

Demand for the new iPhones is higher than that seen in either of the past two years, AT&T spokesman Mark Siegel told Re/code.

In particular, Apple and all the major carriers appear to have sold through their preorder allotments of the larger iPhone 6 Plus with all quoting longer ship times for that model.

A 64 gigabyte iPhone 6 Plus from Verizon, for example, was quoting a mid-October ship date. On AT&T, the same model was listed with a ship time of 35-42 days, also putting it well into October. Apple’s site was quoting ship times of three weeks to four weeks for that model on all carriers.

Sprint’s website was having intermittent issues mid-morning on Friday, displaying a ‘We’ll be back’ error message at times.

Attempting to order a larger iPhone on T-Mobile generated this message:

‘Due to high demand, your Apple product may not be available for immediate shipping. Once we are able to complete your order, you will receive a notification when your product has shipped.’

Update, 9:25 a.m. PT: An Apple representative said that the overnight sales of the new iPhones set a record, though Apple did not say how many have been sold.

‘Response to iPhone 6 and iPhone 6 Plus has been incredible with a record number of preorders overnight,’ Apple told Re/code.

Sprint, meanwhile said ‘response has been strong’ but did not release any pre-order sales numbers.

T-Mobile CEO John Legere apologized on Twitter for any hiccups.

‘Demand has been huge but we are on it,’ Legere said. ‘Keep us posted if you are still having trouble.’

Google is Selling Schools Chromebook Usage via a Traveling Display 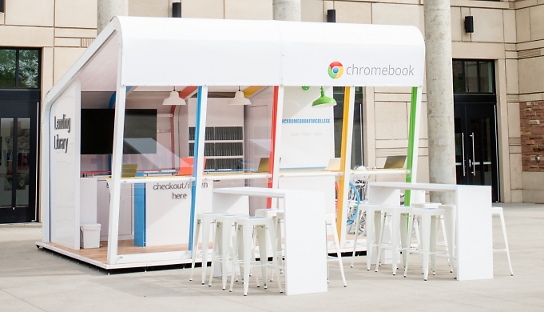 The traveling Google Chromebook display, at a school near you!

TheNextWeb – By: Paul Sawers – Google is making moves to promote Chromebooks in colleges later this year, as it announces a new Chromebook Lending Library initiative.

However, the library won’t be available internationally, or even nationally. It’s only being introduced to 12 institutions in the US – and even then it will only be available for 4-day stints. So in effect, it’s really more like a traveling pop-up shop.

Students will be able to borrow Chromebooks for use on-campus during the week. It’s an interesting endeavor for sure, but when most students will surely have their own laptops, it’s not clear how popular this will prove.

If nothing else, it will let students try them out for battery-life and general functionality, before deciding whether they’re a worthwhile investment for the long-haul.