Greenbot – By: Derek Walter – “Roboto, the signature font for Android and Chrome, is Google’s latest free gift to the world.

Google announced that the Roboto font family is now open source, and has posted the entire code on Github. This means that not only are you allowed to use Roboto without running into any copyright issues, but you can tweak and modify it for your own purposes.

The story behind the story: Google first introduced Roboto with Android Jelly Bean 4.0. Since then it’s become the default font for both Android and Chrome, and has become a major stylistic component of Google’s identity with its Material Design aesthetic. The open source move aligns with Google’s approach to most of its products: making them free and customizable, while hopefully garnering goodwill and community feedback.” 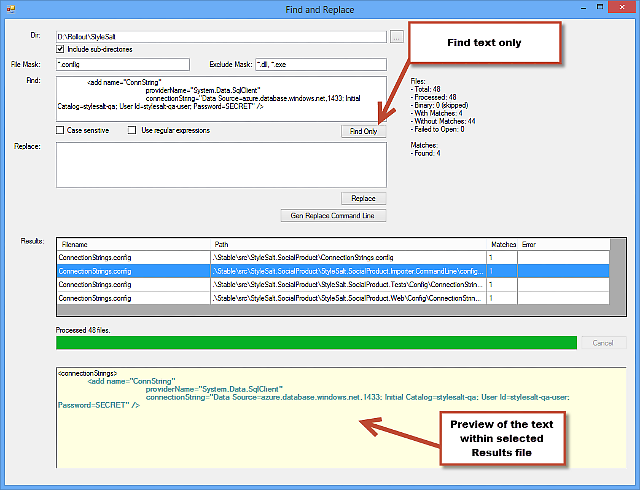 This is an old favorite, that I “re-discovered” this week when I needed to update a lot of exact match text in a whole BUNCH of text files. Man, this thing is awesome!

“An open source tool to find and replace text in multiple files.

This is a walk through of an early release of the new Android “M” operating system.

“Project Jacquard is a new system for weaving technology into fabric, transforming everyday objects, like clothes, into interactive surfaces. Project Jacquard will allow designers and developers to build connected, touch-sensitive textiles into their own products. This is just the beginning, and we’re very excited to see what people will do with it.”

Be patient with this video, and watch to the end!

It seems the Chromecast is REALLY catching on!

Tech Times – By: Sumit Passary – “Google sold more than 10 million Chromecast units worldwide in 2014 and the company has confirmed that it has now sold 17 million units of the device across the globe.

Chromecast was launched in July 2013 and is a thumb-sized media streaming device, which can be plugged to the HDMI port of a TV. A user can stream media to the TV via an Android smartphone or a tablet. The device can also cast media to a TV from iPhones, iPads, Mac computers, Windows laptops or Chromebook.

With 17 million units sold and more than 1.5 billion clicks on the Cast button, Google acknowledges that Chromecast is a big success for the company.

Streaming content is growing rapidly and 2015 will be even bigger. Market analysts estimate that in 2015 about 25 percent of all U.S. broadband homes will be streaming their TV content. Content networks likes HBO may put content online and unbundled from cable packages. Such services from content networks may boost Chromecast sales even more in the coming years.

Experts suggest that easy installation and usage of Chromecast coupled with its cheap $35 price tag are the key reasons behind its success.

Google also revealed that the company is making it easy for developers to bring graphically intensive games or applications to Google Cast receivers with Google Cast Remote Display APIs for Android as well as iOS.

‘While Casting your Android screen is an existing option for users, the new Remote Display API allows mobile developers to build a tailored, integrated second screen experience, without requiring an identical mirroring of content between mobile devices and the Google Cast device,” per Google.

More and more apps are now supporting Chromecast. Currently, Chromecast supports about 350 streaming services. However, Google suggests that more than 6,000 developers are already working about 10,000 Google Cast-ready applications, which means that customers will be attracted to the device.”

Chinese Businessman Builds His Own Enterprise!

Now this guy is a Star Trek fan! He wanted to build a new headquarters for his business, so he built the Enterprise! The business is NetDragon Websoft, a Chinese gaming and mobile Internet company. According to Mashable: “Company Chairman Liu DeJian is reportedly an uberTrekkie, licensing from CBS the rights to build an Enterprise replica. Construction began in 2008 and was finished in 2014; the project cost $160 million total. The building is the only officially licensed Star Trek building on the planet.”

In a big shift, MAME is going open source

ExtremeTech – By: Jamie Lendino – “In a big shift, MAME is going open source MAME, the Multiple Arcade Machine Emulator and darling of fanatical retro arcade gamers, is going open source for the first time in its 18-year history. MAMEdev.org, the non-profit group behind the emulator’s continuing development, announced the move in a surprise tweet Thursday.

This has apparently confused some around the Internet, but it’s actually a simple and important distinction. For as long as I can remember, the project has always made the source code available under a modified BSD license that prohibited commercial applications, and it’s already up on GitHub for a while. But now it’s official that anyone can contribute to or modify the code base.

The current version of MAME, 1.61, supports several thousand classic arcade games from the late 1970s through modern times. It’s available in various versions for Windows, Mac, and Linux platforms. The main goal of the project has always been the preservation and reference of the inner workings of emulated arcade machines in case the last known machine of a particular title stops working and would otherwise disappear forever.

‘Of course, in order to preserve the games and demonstrate that the emulated behavior matches the original, you must also be able to actually play the games. This is considered a nice side effect, and is not MAME’s primary focus,’ the developers say on their site.

MAME engineer Miodrag Milanovic told Gamasutra the BSD license was put in place not only to prohibit reselling it with ROMs or other ‘misuse,’ but to also prevent museums that charged entry fees from showing MAME in exhibits. ‘There was intention to do this for years,’ Milanovic said. ‘Our aim is to help legal license owners in distributing their games based on MAME platform, and to make MAME become a learning tool for developers working on development boards.’

ExtremeTech has covered MAME over the years, including in a 2004 print book from Wiley titled Project Arcade: Build Your Own Arcade Machine, and in a retro gaming blowout I wrote in 2010 that I’ve been meaning to rewrite and update for a while now. I’ve used MAME pretty much since its release in 1997; as fans of the project know, as MAME expanded and became more accurate, you had to download different (some say improved and more accurate) ROM images in order to play the same games as before.

Speaking of which, the latest shift to pure open source doesn’t mean MAME developers will begin packaging ROMs with the code, of course. The ROMs themselves remain under copyright from all of their respective owners. The MAME project is also fully integrated with MESS, the Multi-Emulator Super System. All of this reminds me, it’s probably time to break out the X-Arcade TankStick Pro and get back to work on improving my Missile Command and Kung-Fu Master skills.”

Celebrate a week of palindrome dates! Google self-driving cars to show up this summer, Windows 10 to have Candy Crush Saga installed, the different ‘flavors’ of Windows 10, an Iron man phone is coming, GSotW: BatteryInfoView, new firmware for Amazon Echo.