OK, this looks weird, and maybe cool! Check out the trailer!

It is coming to Fox. We will see how it goes!

Imagine Alexa with a color screen, now you have Echo Show! It will be available on June 28, 2017. 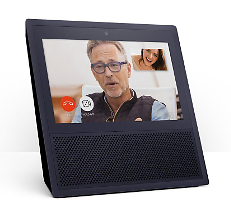 “Echo Show brings you everything you love about Alexa, and now she can show you things. Watch video flash briefings and YouTube, see music lyrics, security cameras, photos, weather forecasts, to-do and shopping lists, and more. All hands-free—just ask.

Introducing a new way to be together. Make hands-free video calls to friends and family who have an Echo Show or the Alexa App, and make voice calls to anyone who has an Echo or Echo Dot.

Ask Alexa to show you the front door or monitor the baby’s room with compatible cameras from Ring and Arlo. Turn on lights, control thermostats and more with WeMo, Philips Hue, ecobee, and other compatible smart home devices.

With eight microphones, beam-forming technology, and noise cancellation, Echo Show hears you from any direction—even while music is playing.

Always getting smarter and adding new features, plus thousands of skills like Uber, Allrecipes, CNN, and more…”

Geek Software of the Week: Etcher!

This is a very cool Open Source tool for setting up a bootable USB stick from .ISO files! Available for 32 and 64 bit Windows, Mac, and Linux!

Validated Burning
No more writing images on corrupted cards and wondering why your device isn’t booting.

Beautiful Interface
Who said burning SD cards has to be an eyesore.

Open Source
Made with JS, HTML, node.js and Electron. Dive in and contribute!

Cross Platform
Works for everyone, no more complicated install instructions.

Check out the video linked below, and see what Mycroft can do!

Forbes – By: Matt Hunckler – “When you issue a command to a virtual assistant like Siri, Alexa, or Cortana, natural language processing technology (NLP) allows the program to interpret your speech and respond in everyday language. Apple, Amazon, Google, and Microsoft are making great strides forward in NLP technology, but unfortunately, these tech giants aren’t interested in sharing how they do it.

‘There’s an entire community of developers looking to access this technology, but so far, it’s been the purview of a few large companies. The technology is walled-off, proprietary, and secretive,’ said Joshua Montgomery, CEO of Kansas City-based Mycroft AI, Inc.

As an alternative to these market leaders, Montgomery and his team created Mycroft, the world’s first open-source AI voice assistant. Mycroft is free to download and use, and developers are invited to alter its code to expand and improve the NLP functionality. More than 700 independent developers are already making contributions to Mycroft’s software.

Mycroft AI, Inc. ran a successful Kickstarter campaign in 2015 to fund its initial product, the ‘Mark 1,’ a smart speaker similar in function to the Amazon Echo and Google Home. But the Mark 1 is only the launching point for Mycroft, which also runs on desktop and can be integrated into any device, from wearables to automobiles.

‘Ask yourself: if your technology could understand human speech and respond naturally, what would you build?’ challenges Montgomery. Watch the pitch below to dig deeper into this world of possibility.

Mycroft’s open-source software and hardware are the keys to its potential. The team based the Mark 1 unit on the Raspberry Pi circuit board and Arduino microcontroller, to encourage users to hack and modify the core equipment. Desktop users can run Mycroft on the developer-friendly Linux OS through the KDE Plasma distribution.

Independent developers can then ‘teach’ Mycroft new skills beyond its original programming and share their code with the community, increasing Mycroft’s functionality for everyone. The number of potential applications is limitless.

Mycroft AI, Inc. is initially focusing on the automotive industry, where there’s a huge opportunity to improve voice control functionality in new vehicles.

‘J.D. Power and Associates has reported that the voice control in the car is the single most complained-about feature in the automobile. We solved that problem, so that’s how we land with companies like Jaguar Land Rover, who’s a strategic investor and soon will be a customer, and General Motors, who we’re working with through 500 Startups,’ Montgomery said.

The Leaders in Open-Source AI

After earning $189,000 in crowdfunding in 2015, Mycroft AI, Inc. went on to complete a $350,000 angel round and a $1.17 million seed round. The team completed the Techstars accelerator program in 2016 and are currently engaged with 500 Startups. They hope to leverage their funding and mentorship to increase their global influence.

‘The seed money we’ve obtained allows us to position ourselves as the open technology in this space,’ Montgomery said. ‘Our goal is that when you think ‘open’ and ‘virtual assistant,’ you’ll think Mycroft.’

This goal may be within reach if the company’s talks with GM, Jaguar, Walmart, GE, and Canonical Ltd. (publisher of the Ubuntu OS) are any indication. Although Mycroft isn’t currently available to developers using Windows or Mac, Montgomery said the software will eventually run on all operating systems.

The biggest threat for Mycroft comes from the possibility that one of the major NLP players will make its own software open source, but that doesn’t seem likely given their track record. Instead, Montgomery is confident in the multi-billion dollar market of companies who don’t want to do business with the Silicon Valley tech giants.

By 2020, it is estimated that 34 billion devices will be connected to the Internet of Things. Montgomery believes Mycroft AI, Inc. is in a position to capture a huge slice of that market with its free-to-use customizable, NLP technology.”

The “Wannacry” Ransomeware has been in the news. You can protect yourself, if you just will patch your systems!

ZDNet – By: Zack Whittaker – “After the global cyberattacks on Friday that infected hundreds of thousands of computer with the WannaCry ransomware, the blame game has begun.

Who was behind the attack? How did the NSA lose control of its hacking tools used as part of this huge ransomware attack? Should we blame Microsoft for not patching older versions of Windows that were left vulnerable to the attack?

As it happens, thousands of businesses may only have themselves to blame.

According to recently released data from IT networking site Spiceworks, about half of all businesses still have at least one computer running Windows XP, despite the aging operating system losing Microsoft security support after more than a decade since its release in early-2014.

That means for over three years, these machines haven’t been patched with the latest security updates, including the fix released in March that could’ve prevented machines from getting infected. (Following the outbreak, Microsoft released a rare, emergency out-of-support patch.)

Granted, some companies will have more machines running Windows XP and Vista, which lost support earlier this year, than others. Some businesses may rely on the aging operating system for their entire fleet of computers, whereas others may rely on one or two machines running custom-built machines, like MRI or X-ray scanners in hospitals, for example, which aren’t always connected to the internet, making them less vulnerable to malware and ransomware.

The data shows that newer operating systems that were patched prior to last week’s ransomware attacks, including Windows 7 and Windows 10, make up a 83 percent share of all business computers.

But despite the risks, Windows XP and Vista still take up a 15 percent share across the corporate world — representing hundreds of thousands of computers.

It’s worth noting that not one single set of data offers a perfectly accurate figure of how many devices are vulnerable to these kinds of mass ransomware events or other kinds of cyberattacks. Spiceworks, which has a commercial stake in the security space, says it uses inventory data to see computers that may be networked but not connected to the internet. Other sources rely on different methodologies, such as the US government’s own digital analytics service, which bases its data on visitors directly accessing government sites. It said just over 1 percent of all visitors in the past three months were running Windows XP or Vista.

The question remains: for all the benefits that software updates provide, why the apathy?

‘Many companies subscribe to the theory that if it’s ‘not broke, don’t fix it,’ especially those that aren’t prioritizing IT,’ said Peter Tsai, a senior technology analyst at Spiceworks. ‘As a result, many IT departments lack the resources and budget needed to upgrade to newer operating systems like Windows 10. It takes time to upgrade all systems in an organization and train end users on the new features and functionality.’

In all, just over half of all businesses say that there’s no need to update because the current system still works. Others cite IT pressures and lack of time, investments, or budget constraints.

Those barriers can translate into real losses. Take what happened with last week’s cyberattack. Dozens of hospitals around the UK were affected, with some forced to turn patients away. But unlike NHS trusts and hospitals in England and Scotland which suffered significantly at the hands of the ransomware attack late last week, NHS Wales wasn’t affected by the ransomware attack at all, a feat largely attributed to the fact the health system recently updated its entire network.

‘Now more than ever, it’s critical for IT professionals to make a business case for more resources,’ said Tsai.

If this ransomware attack has proven anything, investing in security isn’t just a good idea, it’s mission critical.”