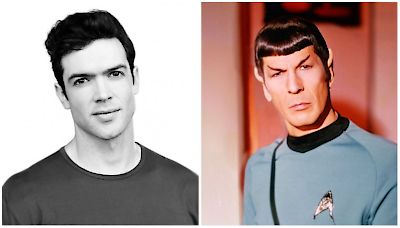 I can see the resemblance, it could work.

The Verge – By: Devon Maloney – “Earlier this summer, at 2018’s San Diego Comic-Con, Star Trek: Discovery showrunner Alex Kurtzman confirmed that Spock, the beloved half-Vulcan second-in-command of the original Star Trek’s U.S.S. Enterprise, would be appearing in the newest Trek series. After much searching, CBS has announced that the show has cast the role. Ethan Peck, whose previous credits include playing Patrick Verona (the Heath Ledger character) in the TV adaptation of 10 Things I Hate About You — and who also happens to be the grandson of legendary actor Gregory Peck — will fill the TV shoes of the late Leonard Nimoy. (Peck is not related to Zachary Quinto, who currently plays the character in the film franchise, but there certainly is a non-familial resemblance.)

Noting in the official CBS press release that Spock ‘remains the only member of the original bridge crew to span every era of Star Trek’ — Spock technically did not appear on the early aughts’ Star Trek: Enterprise, but the man can be forgiven for overlooking the least-beloved Trek series — Kurtzman explains that the showrunners were looking for an actor who could ‘effortlessly embody Spock’s greatest qualities, beyond obvious logic: empathy, intuition, compassion, confusion, and yearning.’ Kurtzman says Peck seems “aware of his daunting responsibility to Leonard, Zack, and the fans, and ready to confront the challenge in the service of protecting and expanding on Spock’s legacy.”

The wording of Kurtzman’s statement is notable, because its reassuring language speaks to the anxieties fans have expressed about Trek in recent years, about the quality of the new TV series, the continuity weirdness between Discovery and the J.J. Abrams reboot films, and the entire idea of Spock — in addition to Christopher Pike, the captain from the original 1965 Trek pilot, and Number One, Pike’s female first officer — being pulled into Discovery in a misguided attempt to give the show additional legitimacy or appeal.

Other fan concerns have involved the crew shake-ups that have plagued Discovery since its inception, from co-creator Bryan Fuller notoriously exiting the show to the recent firing of his replacements, Gretchen Berg and Aaron Harberts, over budget issues and alleged harassment. This statement, combined with the announcement out of the annual Star Trek Las Vegas convention earlier this month, that a new series in the works will bring Patrick Stewart back to the franchise as Jean-Luc Picard, seems to indicate that Trek will be leaning hard on nostalgia going forward. At least this time, we’ll be returning to the past to find comfort in a better future.

As it stands, Peck has clearly made a measured effort to start off on the right foot, too. In his announcement tweet about his casting, he posted a photo with Nimoy’s family, and for good measure, signed off the way the late Nimoy (RIP) used to: with a #LLAP — Live Long and Prosper.”