The USB standard has been a long and winding road, and now, we have a new one coming next year!

USB 4: Everything We Know, Including Apple Support 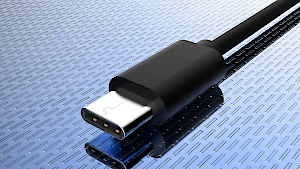 Tom’s Hardware – By Avram Piltch – “Get ready for a whole new generation of USB. In 2019, the USB Promoter Group announced that a new standard, “USB4” (official spelling lacks a space, but we’re using one in this article to reflect the way readers search), but as new standards take time to catch on, we’re in late 2020 and still waiting for the devices to come out. However, with current Tiger Lake laptops offer USB 4 support and Apple announcing built-in USB 4 for its upcoming M1 Arm-based laptop chips, a new generation of peripherals is likely around the corner.

USB 4 promises a host of benefits that include faster transfer speeds, better management of video and optional compatibility with Thunderbolt 3.

In a world where there are four different versions of USB 3.2, two types of USB 3.1 and a host of connector types and power specs, the idea of a new standard might seem overwhelming. However, there’s also a lot to look forward to. Here’s everything you need to know about USB 4.

The new USB 4 standard will have three main benefits over prior versions of USB:

Will Use Type-C Ports

This almost goes without saying: USB 4 will only operate over the Type-C connector. Don’t expect to see a USB 4 device or hub with old-fashioned Type-A ports. That’s no surprise, as other recent standards such as USB Power Delivery only work on Type-C. If you do connect to, for example, a Type-A 3.2 port by using an adapter, the speed and power will drop down to the lowest common denominator.

Intel made news when it said it had given the Thunderbolt 3 protocol to USB Promoter Group, allowing devices with USB 4 ports to potentially be compatible with Thunderbolt 3 devices and USB 4 devices to attach to Thunderbolt 3. That’s good news for everyone, especially laptop users who want to play games by connecting an eGPU (external graphics card).

Though there are a number of Thunderbolt 3 eGPUs out there, few laptops and desktops come with Thunderbolt 3 and almost no motherboards support Thunderbolt 3 out of the box. Because Thunderbolt is an Intel standard, you won’t find it on any AMD-powered computer. Thunderbolt 3 is also more expensive to implement than standard USB, because it’s not an open standard and it requires an extra chip. So today, if you want an eGPU or a super-speedy Thunderbolt 3 storage drive, your choice of computer is very limited.

With USB 4, device and host manufacturers won’t have to pay Intel any royalties so there’s a much better chance of mass adoption. However, there’s a catch: Thunderbolt compatibility is not a required part of the USB 4 spec so manufacturers don’t have to implement it. You could end up buying a laptop with USB 4 and find that it doesn’t work with, say, your Razer Core X graphics dock. However, USB Promoter Group CEO Brad Saunders anticipates that most PCs with USB 4 will be made to work with Thunderbolt 3.

‘We do expect PC vendors to broadly support Thunderbolt backward compatibility, because most of what they need is already built into the USB 4 design,’ Saunders said. ‘It’s based on the same technology so we do anticipate a high rate of adoption there, but the phone guys will probably choose not to add the extra little bit they need to be backward compatible.’

Though it can hit theoretical speeds of up to 40 Gbps, not all USB devices or hosts will support that standard. Saunders told us that there will be three speeds: 10 Gbps, 20 Gbps and 40 Gbps. Expect smaller and less-expensive devices such as phones and Chromebooks to use one of the lower speeds and, when you do get a laptop, you’ll need to make sure to look at the specs if you want the fastest USB 4 connection available.

Great at Sharing Bandwidth Between Video and Data

A big part of the USB 4 spec is the ability to dynamically adjust the amount of resources that are available when you are sending both video and data over the same connection. So, let’s say that you have USB 4 with a 40 Gbps maximum and you’re outputting to a 4K monitor while copying a ton of files from an external SSD. And let’s stipulate that the video feed needs about 12.5 Gbps. In that case, USB 4 would allocate the remaining 27.5 Mbps to your backup drive.

USB-C introduced ‘alternative mode,’ the ability to transmit DisplayPort / HDMI video from a Type-C port, but the current 3.x spec doesn’t provide a good way to split up resources. According to Saunders, DisplayPort alt mode can split the bandwidth between USB data and video data exactly 50/50, and HDMI alt mode doesn’t allow simultaneous USB data at all.

‘With USB SuperSpeed, we didn’t have quite the flexibility in architecture to really manage those two distinct bandwidths [data and video] in a combined fashion over the connector,’ Saunders said. ‘So this is really optimized for more scalability between the different application types.’

Rather than using alternative mode, many current docking stations use DisplayLink technology, which compresses the video signal and turns it into USB data. It will be interesting to see whether most USB 4 docks use alternative mode instead.

Where some current-day USB Type-C devices support the USB Power Delivery (USB PD) standard for carrying electricity to high-powered devices, not all of them do. Every USB 4 device and host will have to comply with USB PD, which allows for higher wattages and better power management.

USB PD can theoretically provide up to 100 watts, but charging devices do not have to support that amount of power. So there’s no guarantee that a given USB 4 port would give or take the amount that a particular notebook requires to operate, but you can expect it to follow the spec.

The best thing about all generations of USB is how well they work together. USB 4 will work with USB 3 and USB 2 devices and ports. It should go without saying, though, that you’ll only get the speed and capabilities of the weakest part of your connection. A USB 4 device won’t be able to transfer at 40 Gbps when you hook it to a USB 3.2 port and an old-school USB 2 port won’t suddenly get faster just because you connect it to a brand new USB 4 backup drive.

Your Old Cables Will Work At Their Maximum Speeds

Your existing USB cables and adapters will work with USB 4, but as with everything else that’s backward compatible, they will only operate at their maximum rated speeds. So, if you have a USB 3.2 cable that can operate at 5 Gbps, you’ll only get up to 5 Gbps, even if you are using it to connect a USB 4 port to a USB 4 device. To get Thunderbolt 3 support, you’ll likely need a Thunderbolt 3 cable.

The USB Promoter forum released the specs for USB 4 in September 2019 (you can find them here), but don’t expect to see any products based on the standard until late 2020 or early 2021. Saunders told us that a typical development cycle for new products is 12 to 18 months.

When it comes to USB 4-enabled laptops and desktops, even 18 months seems optimistic. The spec for Type-C was announced in 2014 and It took a really long time for USB Type-C to go mainstream–many laptops still don’t have it.

Will Cost More to Manufacture Than USB 3.2

Another hurdle for mass adoption is the added cost of USB 4. While we don’t know exactly how much it will cost for PC and device vendors to add USB 4 connectivity, we know that it will require more expensive components than the latest current standard, USB 3.2.

‘I think it’s going to be something less than Thunderbolt, but not as inexpensive as SuperSpeed in terms of the actual material cost to the product developer,” Saunders said. “It takes a lot of gates to do it and the product still does all the SuperSpeed stuff.’

Saunders added that he hopes the costs will come down quickly. However, we’d guess that the cost differential will push USB 4 onto higher end PCs, at least at first.

Why USB 4 is Officially Spelled as ‘USB4’ (No Space)

Unlike every other version of USB, the new spec is officially spelled without a space before the version number. While we think that most people will probably write it as USB 4, the official name is USB4. USB Promoter Group CEO Brad Saunders explained that his goal in removing the space was to take the focus off of version numbers and onto a brand name.

‘One of the things I’ve trying to signal right now is that we don’t plan to get into a 4.0, 4.1, 4.2 kind of iterative path,’ he told us. ‘And we don’t want it to be associated and used with products as a differentiator . . . we want to keep it as simple as possible.’

The USB 3.x spec has been filled with different version numbers, including USB 3.0, USB 3.1 Gen 1, USB 3.1 Gen 2 and four different versions of USB 3.2, in addition to the presence or absence of optional features such as USB PD and alternate mode. But Saunders told us that those numbers are really for developers and he wishes that OEMs would use simpler terms like ‘SuperSpeed USB’ when marketing their products.

Perhaps because of his concern about marketers throwing too many digits at consumers, Saunders said the organization does not plan to use version numbers for spec updates. So, even if there’s a faster iteration in two years, it will likely still be called USB 4 but with the speed number after (we imagine something like USB 4 80 Gbps). He and his team still haven’t decided on a branding strategy, so there may also be a marketing name for USB 4. Much like USB 3.x is known as ‘SuperSpeed USB,’ USB 4 could end up with its own moniker (we suggest ‘Super Duper Speed USB’).

‘I want it to be a clear distinction. USB 4 is its own architecture with its own set of speeds and try not get trapped on these dot releases for every single speed,’ he said. ‘When and if it goes faster, we’ll simply have the faster version of the certification and the brand.’

There’s still a lot more that we don’t know about USB 4 than we do. We’ll learn a lot more when the spec is released later this year, but whatever happens, don’t expect to see devices with USB 4 until at least late 2020, but more likely 2021 and beyond.”