Geek Software of the Week: DeltaCopy!

Have you Linux geeks ever wanted rsync on Windows? Miss it, huh? Well, here’s a “Windowzy” version for ya!

“In general terms, DeltaCopy is an open source, fast incremental backup program. Let’s say you have to backup one file that is 500 MB every night. A normal file copy would copy the entire file even if a few bytes have changed. DeltaCopy, on the other hand, would only copy the part of file that has actually been modified. This reduces the data transfer to just a small fraction of 500 MB saving time and network bandwidth. In technical terms, DeltaCopy is a “Windows Friendly” wrapper around the Rsync program, currently maintained by Wayne Davison. “rsync” is primarily designed for Unix/Linux/BSD systems. Although ports are available for Windows, they typicall require downloading Cygwin libraries and manual configuration.”

Dr. Bill’s Podcast Number 60! Props to Alfredo Romo, who wrote the pod production software we use- PodProducer! Available at: https://www.podproducer.net “On a Podcast!” by Cruisebox! To celebrate our 60th podcast we play “On A Podcast!” by Cruisebox! YOU are part of the Revolution! The Techpodcast Network Sounder! Dr. Bill digresses again! We check out the items in the Blog, Dr. Bill – The Computer Curmudgeon! Happy Birthday to the iPod! It has 73% of the MP3 Player market! Wow! Weird Al Yankovik also had a birthday… he’s 47. Ubuntu Linux passes the Mac on Google Trends. Firefox 2.0 and IE 7.0 are out… check them out! Features Dr. Bill likes about Firefox 2.0! The Tab Browser Closer and Spell Check… two great, new features! The Minimo Windows Mobile Web Browser. Darkmoon keeps the Doctor straight! Go from Linux “Noob” to Linux “Dewd!” Stephen J. Vaughn-Nichols recommendations for Linux newbies, check them out! Ubuntu “The Edgy Eft” is out! Check it out! You will like it! It has cool enhancements! How to you pronounce all the “…buntus” Like “Ubuntu”, “Kubuntu”, “Xubuntu”, and “Edubuntu.” DEWD! (An expression of excitement!) Geek Software of the Week: ÂµTorrent! The advantages of µTorrent over Azureus as a BitTorrent client. My wife, Belinda, says in post as I write these show notes that the “doohickey” is an “upsilon”… she’s SO smart! The coolness of controlling uTorrent via a web browser! RSS feeds under IE 7.0 and Firefox 2.0! Firefox 2.0 wins in handling RSS feeds! Check it out yourself. You will see! We are over time! Gotta go! See ya next week!

RSS is “Really Simple Syndication” and is the basis of most Blogs, Podcasts, and what has come to be called “New Media” on the web. If you have ever looked at the XML code of a raw RSS feed (such as you saw under old web browsers) it was BORING! Now, it looks cool! Check out what it looks like under Internet Explorer 7.0: 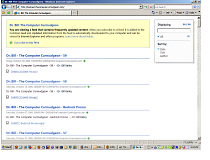 Now, check it out under Mozilla Firefox 2.0: 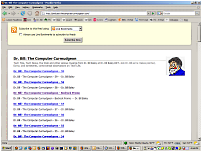 Firefox wins! It has the cool “Dr. Bill” cartoon, and more details… so, once again, Open Source rocks! Ha! The feed to see, by the way is:

Geek Software of the Week: uTorrent

OK, it is really ÂµTorrent, with a little “doohickey” under the “U.” But, I don’t know what it is called. (I am sure someone like darkmoon will tell me!) It stands for “micro,” so you would expect it to be small and quick… and it is!

What is it? It is a BitTorrent client! Previously, I have used Azureus. And, it can be a bit “sluggish!” This one is QUICK! Also, a cool feature, you can control it from over the web! Now, THAT rocks! Check it out! You will like it!

“Most of the features present in other BitTorrent clients are present in ÂµTorrent, including bandwidth prioritization, scheduling, RSS auto-downloading and Mainline DHT (compatible with BitComet). Additionally, ÂµTorrent supports the Protocol Encryption joint specification (compatible with Azureus 2.4.0.0 and above, BitComet 0.63 and above) and peer exchange. ÂµTorrent was written with efficiency in mind. Unlike many torrent clients, it does not hog valuable system resources – typically using less than 6MB of memory, allowing you to use the computer as if it weren’t there at all. Additionally, the program itself is contained within a single executable less than 170 KB in size.” 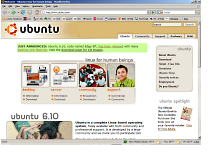 I am downloading as I type! The Edgy Eft is official and out! Get it while it’s hot!

The desktop version introduces a host of new features, an improved interface and a wide variety of new applications and desktop tools making Ubuntu 6.10 flexible and user-friendly.

Are You a Linux Noob? Do Ya Wannabe?

Then, here’s your homework! A required reading list for Linux newbies!

These are the books (and one website) that our buddy, Steven J. Vaughan-Nichols recommends as a good intro to Linux:

And… Speaking of Mozilla… They Have a New Project… Minimo! 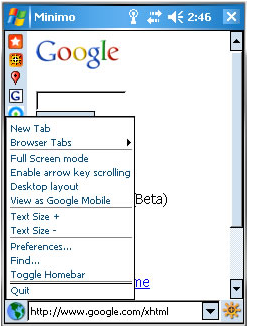 And, that project is Minimo, a mini web browser for Windows Mobile 4.2 or 5.0 devices!

“The Minimo has been focused on code-size and runtime footprint reduction, small screen usablity, and porting to small consumer devices. We hope to make Minimo the browser of choice on small devices, or machines with limited system resources; taking advantage of Mozilla’s support for a broad and comprehensive set of standards and the variety of content on the web, proven security, international support, and cross platform capability.”

Check it out! Download and enjoy! Firefox 2.0 is official!

Really! Get it now!

In Anticipation of the Firefox V2.0 Launch…

Here’s an interview with Chris Beard, Mozilla VP of Products:

Why call it Version 2.0? “It’s more sort of a natural evolution. It felt to us like a 2.0 product, particularly if we looked at it from what 1.0 was, to 2.0. It was like half steps, from 1.0 to 1.5 to 2.0. It’s also a very stable and rock solid release – it’s really ready for the masses. So it really does feel like a 2, as opposed to a 1.x product. Firefox 2 has, we estimate, between 3-4 times the number of fixes than FF 1.5 did. And that doesn’t just include fixes and bugs, but all of the feature work as well as memory, stability and security issues. But there’s certainly a lot in it which makes it really solid.”

Is Ubuntu more popular than the Mac? According to The Linux Advocate and Google Trends it is!

“I was just taking a look at Google Trends and I found out something interesting. Apparently Ubuntu Linux has not only surpassed its major competitor in Linux ( SuSE ) in popularity, as well as the distro it’s based off of (Debian) , but it seems to have also surpassed another major competitor. Yes, that’s right! Apple Computer’s very own Mac OS X has also been defeated in popularity by Ubuntu! Check it out for yourself. Here is a screenshot I took not 15 minutes ago. The blue line you see shooting up to the sky there is Ubuntu itself, while Mac OS, SuSE and Debian seem to all hang around the same general level of popularity. I’ve purposely left Windows out of this graph because if added, all of these OS’s crawl near the bottom of the graph in an almost flat line compared to Windows’ wild lead. Just thought this was pretty cool! Free software is definitely making some serious progress.”