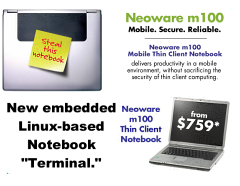 “Thin-client maker Neoware on Oct. 17 announced its first-ever line of notebooks, which the company hopes will appeal to security-conscious professionals. The company, based in King of Prussia, Pa., will start taking orders for its Neoware m100 thin-client notebook later in October, said Diana Wong, director of product marketing. The company has had success with its line of thin-client desktops, and Wong said the time seemed right to offer a line of notebooks that would appeal to those users concerned about security. Wong said the new notebooks will appeal to users who need access to secure data from outside the company.”

This looks cool! I like that it uses embedded Linux. The idea is that since it has no hard drive… if it gets stolen, there is really no data to profit from… and without a terminal server to connect too… it would be pretty useless to a criminal anyway. Interesting idea! (That why they have the sticker that says, “Steal this Notebook!”) Cute.