ALL RIGHT! I Want One of These! An Ethanol Kit for Your Car! 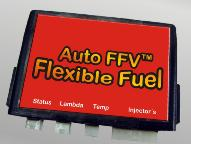 I have long held that ethanol burns cleaner, can be made from corn (or other products we can grow her at home), and let’s say, “Phooey!” to the A-rabs!

Adapter Lets Any Car Use Ethanol!

“Brazilian company ABC Esso will soon sell an adapter in the U.S. Abcesso that lets any gasoline vehicle burn up to 100 percent ethanol. The AutoFFV works with the vehicle’s existing sensors to detect the ethanol/gasoline ratio and instructs the engine to operate accordingly. The company has developed adapters for Ford, GM, Honda, Mazda, Volvo and Toyota vehicles. The company claims there are no cold start problems when using E85. ABC Esso says some fuel pumps that are not so ethanol-tolerant may have to be replaced, and recommends that owners replace their fuel filters after the product is installed because the ethanol will scrub out impurities that will be caught in the filter. According to Vidar Lura, managing director of Abcesso, the product will sell for between $500 and $900, and the company is currently setting up distribution agreements in the U.S. He told me the product is used in Brazil, which primarily uses ethanol as a fuel. If this works as advertised (no endorsement implied) it could be a big hit here with hybrid owners and others who are concerned about the environment and prefer domestically produced fuel.”