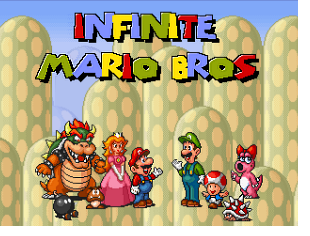 Imagine Mario Bros. with the game maps always changing with a random pattern… you could play forever! Now imagine that you didn’t have to buy a game, or a console! (A big difference from all the folks that are standing in line for the Wii and the PS3!) This on-line game is written in Java and was part of a contest to write a Java based video game.

Controls:
Use the arrow keys to move Mario around.
Press A to run faster and to pick up shells.
Press S to jump.
Press F1 to toggle Scale 2x scaling.

Interesting from both a programming and gaming point of view!