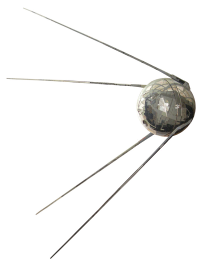 Wow! Fifty years ago TODAY the Sputnik satellite was launched by the Soviet Union, thus starting the “Space Race!” It also fueled the explosion in science fiction and all things geeky! A big day for a science nut, sci fi nut, and Star Trek fan like myself! Here’s to “Sport-nik!” (Shameless reference to the “Do the Cosmonaut-y” video!) Who would have thought that a basketball sized ball that beeped would lead to so much!