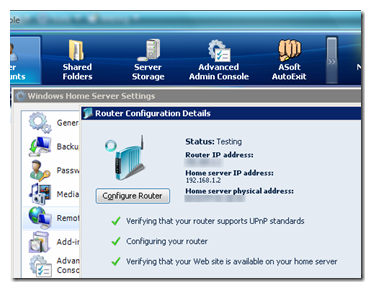 “Microsoft quietly began offering its Windows Home Server in the US this week, with the operating system appearing on electronics retailer Newegg.com for $190 USD. Microsoft released the OS to manufacturing back in July of this year, but the Windows Home Server code wasn’t intended to be sold individually. Instead, devices are built around the OS, and that is how the end consumer would get their hands on the product. With Windows Home Server’s appearance on Newegg, it now appears that Microsoft has given its blessing to allow enterprising computer builders to create their own devices based on the OS. The platform is being marketed as a way to centralize frequently accessed data such as photos, videos, and music, and provide backup to homes that have multiple computers. Add-ins provide additional functionality: for example, a TiVo add in allows users to stream videos from their computers to the set-top box. Additionally, system can act as a Web server, allowing a user to share multimedia and files outside of their immediate home network, and the devices built around the platform are expandable as a user’s need warrants additional functionality, space and so forth.”