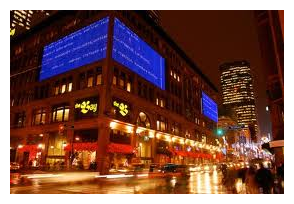 “At one of Toronto’s locations of The Bay department store, four giant screens have suffered from the infamous Blue Screen of Death for days. You’d think that someone would, I dunno, turn off the freakin’ screens. Or, at minimum, there’s gotta be some 2.4gHz nanny cam feed they could leech for at least a few days before anyone complained. Because after the first 24 hours or so of BSOD, we begin to think that they like the aesthetic.”

Biggest Blue Screen of Death of ALL Time!