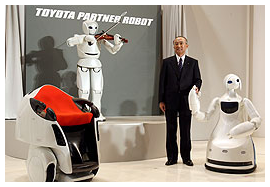 Will Japan increase it’s declining citizenry with humans or robots? Some seem to prefer the latter!

“General Motors introduced the first industrial robots in 1961. Since then, Japanâ€™s largest companies have competed to make robots as human as possible. On December 6th Toyota went one step further. After showing off a white android that played a meek rendition of ‘Pomp and Circumstance’ on the violin, Toyotaâ€™s boss, Katsuaki Watanabe, announced that the company would make electro-mechanical critters a core business. Four areas look promising: nursing, cleaning homes, manufacturing and ferrying people short distances (in a sort of automatic wheelchair)… Isaac Asimov, a science-fiction writer, famously created the ‘Three Laws of Robotics’ which defined the primacy of man relative to machine. Robots may not injure humans, must obey them, and must protect themselves without violating the first two rules. These sound minatory, but as Japanâ€™s population starts to decline due to the low birth-rate, and its number of elderly swell, robots are seen as a solution.”