Dr. Bill talks about his new WordPress web site theme… and on and on! Also, coverage of CES from Techpodcasts Network and tech news about other things! Also, Geek Culture about being “Unhackable!” And, a rant on energy independence!

Dr. Bill shows us some footage from Techpodcasts Network at the Consumer Electronics Show – 2008! Andy McCaskey, from TPN, checks out the Tricaster and Fox News video setup at CES and Todd Cochrane gets ready for an interview on Fox News!

Check it out… Todd and Andy talk about the Fox News video setup (interesting that they use TriCaster… one of my favorite “cool geek” video setups… wish I had one!) Anyway, it is pretty interesting, and contrasts the difference between blogger coverage of CES and network (Fox) coverage!

The video is embedded from Blip.TV. 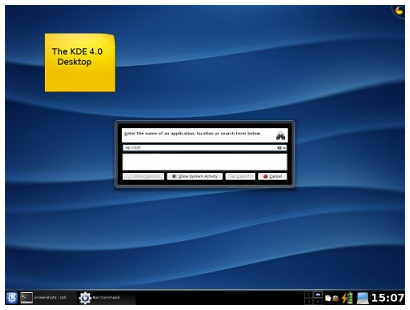 It is here! And it looks cool! Check it out!

The KDE Community is thrilled to announce the immediate availability of KDE 4.0. This significant release marks both the end of the long and intensive development cycle leading up to KDE 4.0 and the beginning of the KDE 4 era.”

Cool tool from Pinnacle Systems that allow you to transfer analog video to digital video, with no PC needed! Very neat!

Link to the web site below:
Pinnacle Systems Video Transfer

New features and interactivity, but do we care?

Blu-ray goes interactive for 2008, but do consumers care?

“With Blu-ray Profile 2.0 bringing Internet connectivity to all future players, the format is looking at interactivity to convince customers to make the switch. Blu-ray’s focus on interactive features is also a response to HD DVD, which has long offered advanced Web-enabled capabilities through the format’s HDi layer. ‘Now we’re ready for the next phase: the phase to really fulfill the promise of Blu-ray technology. That’s really to start to develop the interactivity,’ said David Bishop, President Worldwide for Sony Pictures Home Entertainment, during Monday’s Blu-ray press conference. ‘We’ll really get the chance to use our creative juices moving forward. You’ll see multiplayer gaming, ringtones that can be delivered to the consumer.’ Instead of Microsoft-developed HDi, Blu-ray opted to use a Java-based technology known as BD-J. BD Live, the term used for the Internet-capable interactive features that will be added to movies, is essentially a set of Java components that interact with the BD-J layer that exists in the hardware players. Because it chose a Java-based technology, Blu-ray has some distinct advantages over HD DVD. For example, the format can make use of a myriad of existing Java components and even add new functionality over time. But the blessing is also a curse, as BD-J is still in flux and the differing implementations in many existing Blu-ray players have quirks and bugs that developers must work around. By contrast HDi is precisely defined, although that makes it inherently more limited.”

So… Our New Theme is Up and Running…

Wha’ da ya think? New theme, new year… everyone is asking for CHANGE anyway… I like the new theme… while it might be a mite “busier” it is somewhat better organized and clean. And, I am still “tweaking it!”

Here’s a neat idea in security devices for your PC. Anti-virus, anti-spyware, etc. all on one USB stick-like device. Check out “Yoggie” in this interview with Todd Cochrane from Techpodcasts Network.

Here’s a link to it on ThinkGeek: “Yoggie” Gatekeeper Pro

Maybe We Shouldn’t Give Up on Ethanol Yet!

I like the idea of “growing” our own fuel… but, I have been hit with many e-mails about how inefficient it is to get liquid fuels from corn in the form of ethanol. “OK, OK,” I said, “I will back off!” The use of corn to produce ethanol HAS resulted in a sharply higher cost of corn as a fuel… and I like corn in my Japanese fried rice! (Grin!) My big deal was that growing our own fuel would get us away from depending on foreign oil for our fuel, and make us less dependent, and therefore safer, as a country, in the world.

President Bush was practically laughed down a few years ago, when he suggested using switchgrass as a fuel source in a State of the Union address. (Now, obviously, he didn’t come up with the idea, he was merely repeating something he had heard from his energy advisors… but it was attributed to him as his “hair-brained idea.” Now, there is news that this might just be viable after all! Try a return of 343% to 700% of the energy used to produce it!

Biofuels on a Big Scale

“On paper, making biofuels from switchgrass and other perennials that need not be replanted seems like a no-brainer. Use the sun’s energy to grow the crop, and then convert it to liquid fuels to power our cars without the need for gasoline. But so far, experiments with these ‘cellulosic’ crop-based fuels have only been conducted on small scales, leaving open the question of how feasible the strategy is. Now, the first large-scale study shows that switchgrass yields more than five times the energy needed to grow, harvest, and transport the grass and convert it to ethanol. The results could propel efforts to sow millions of hectares of marginal farmland with biofuel crops. Previous studies on switchgrass plots suggested that ethanol made from the plant would yield anywhere from 343% to 700% of the energy put into growing the crop and processing it into biofuel. But these studies were based on lab-scale plots of about 5 square meters. So 6 years ago, Kenneth Vogel, a geneticist with the U.S. Department of Agriculture in Lincoln, Nebraska, and colleagues set out to enlist farmers for a much larger evaluation. Farmers planted switchgrass on 10 farms, each of which was between 3 and 9 hectares. They then tracked the inputs they used–diesel for farm equipment and transporting the harvested grasses, for example–as well as the amount of grass they raised over a 5-year period. After crunching the numbers, Vogel and his colleagues found that ethanol produced from switchgrass yields 540% of the energy used to grow, harvest, and process it into ethanol. Equally important, the researchers found that the switchgrass is carbon neutral, as it absorbs essentially the same amount of greenhouse gases while it’s growing as it emits when burned as fuel.”

By the way, for the record, I am ALL for hydrogen power as well! So, don’t think I am putting all my eggs in one basket! I just think that our country’s energy independence is as important a point in our overall Homeland Security as is a secure border! There are lot’s of ways to get there!

Below is an embedded video from Todd Cochrane and Andy McCaskey from TPN as they tour CES. Check it out!