The WB Network went off the air in favor of “The CW”… now, The WB is being revived… on-line!

“Today, Warner has announced that it will be bringing back The WB as a free, ad-supported online video network to showcase original Studio 2.0 content as well as offer hit WB shows from that networks’ — and others’ — past. Launching in beta at the beginning of May, TheWB.com will offer free full-length episodes of The OC, Buffy the Vampire Slayer, Gilmore Girls, One Tree Hill, and Everwood, as well as the current CW show Smallville — considered by many TV analysts The CW’s only actual ‘hit,’ in very relative terms. In addition, The WB will present shows that never actually appeared on the former ‘Frog’ network, but were produced by Warner Bros. Television, including UPN’s All of Us and Veronica Mars, and NBC’s one-time #1 Thursday night blockbuster Friends.”

I was installing AVG on a new system I was setting up for a client. So, AVG 8.0 is out… and, weirdly enough, AVG Anti-Spyware Free has been discontinued. And so soon after I said it was really cool and improved. Sigh. Oh well… Version 8.0 is very cool. So, get it… and stay safe out there!

“The Vanished Into the Ether Podcast” of Dr. Bill Podcast #133

The Evil Empire is gunning for Yahoo… and the jig may be up this weekend. I can hear the Vader music, Dum, dum, dum, dum, da dum, dum da dum!

Microsoft CFO to Yahoo: This weekend is deadline for buyout bid

“‘If Microsoft doesn’t ‘make progress’ in its Yahoo buyout bid by this weekend, the Redmond company will move on to options that include taking the offer to Yahoo shareholders and dropping the acquisition offer entirely, said Chris Liddell, senior VP and CFO at Microsoft, in a conference call late Thursday. [But] Microsoft is focused on the online ad market,’ due to industry predictions of major growth in this space over the next few years, Liddell told financial analysts and journalists during Microsoft’s third quarter financial call. Accordingly, Microsoft has developed a back-up ad strategy that will revolve around Windows Live and its other existing properties if the Yahoo deal stays stymied, Lidell said during the call, in which Microsoft announced net income of $4.4 billion — down 11 percent from the same quarter last year — on sales that rose only slightly this past quarter to $14.5 billion.

We know Vista is lame, but why? Microsoft is the largest, most successful software company in the world. Why did they release such a turkey? John C. Dvorak thinks he knows why.

“1- Market confusion. From the beginning, everyone moaned about the fact that there were simply too many versions of the OS for sale. Who needs all the variations? It’s stupidâ€”plain and simple. What you want is the one best version, not a slew of namby-pamby ones. This happened because the folks at Microsoft know only how to merchandise and, seemingly, not how to market.

3- Missing components. Yes, WinFS, the promised file system and a core pillar of Vista, isn’t there. The promises regarding the development of this file system go back to 1991. And Microsoft cannot make it a reality? Why?

4- Laptop battery-life drain. This was supposed to be fixed with special code and hybrid hard disks (HHD). Still, users have to resort to expensive silicon drives.

5- HHD fiasco. I’m still irked about being told by the HD industry that the benefits of the new generation of hard drives will ‘make people flock to Vista.’ That was over two years ago, and suddenly there’s silence about the whole thing. One of these days, someone will tell me what really happened. My guess: It never worked correctly, and no one could make it work.

7- Missing drivers. It seems incredible that all of the Windows drivers that worked with XP did not necessarily work with Vista. How does that happen?

8- Conflicting advice. There was no consistent advice for users about implementation, and Microsoft did nothing to help. Some people said that you should get a new computer only with Vista preloaded and not upgrade. Others said upgrades were fine. Others upgraded and complained. Microsoft should have put up a specialized Web site that could test machines remotely and tell users whether it would be a good ideaâ€”or notâ€”to upgrade. A promotional/test CD-ROM that could boot Vista (like those Knoppix Linux disks) would have been a good idea, too.

9- XP mania. You’d think that the world was in love with Windows XP. Everyone wants to keep it on the market, and this makes Vista look even worse. What’s more, there were far too many reports about people reverting to XP after an ‘experience’ with Vista. If Microsoft had the testing service that I mention above in place, this would never have happened.

10- Mediocre rollout. Unlike other rollouts of important Windows products, Microsoft did not put on much of a show with Vista. While there were some weird posters placed in subways and maybe a few TV commercials, none of it compared with the rollouts from a few years back, where the company got worldwide attention. By comparison, the company seemed almost sheepish or embarrassed by Vista, something that was also reflected in the recent lackluster rollout of Server 2008â€”a total snooze. This sent the wrong signals to users and may have made them hypercritical.

11- Performance. You’re not supposed to deliver a new operating system that’s been in development for more than four years yet performs worse than the previous OS. Performance should be at the top, not the bottom, of the to-do list. You get the sense that Microsoft just piles code on top of code and somewhere in the middle of it all is MS-DOS 1.0.” 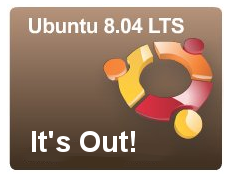 LTS is “Long Term Support.” The desktop will be supported though 2011, the server edition is supported through 2013. Hooray! The day is always brighter when there is a new Ubuntu version to play with!

“Ubuntu is a community developed operating system that is perfect for laptops, desktops and servers. Whether you use it at home, at school or at work Ubuntu contains all the applications you’ll ever need, from word processing and email applications, to web server software and programming tools. Ubuntu is and always will be free of charge. You do not pay any licensing fees. You can download, use and share Ubuntu with your friends, family, school or business for absolutely nothing. We issue a new desktop and server release every six months. That means you’ll always have the the latest and greatest applications that the open source world has to offer. Ubuntu is designed with security in mind. You get free security updates for at least 18 months on the desktop and server. With the Long Term Support (LTS) version you get three years support on the desktop, and five years on the server. There is no extra fee for the LTS version, we make our very best work available to everyone on the same free terms. Upgrades to new versions of Ubuntu are and always will be free of charge. Everything you need on one CD, which provides a complete working environment. Additional software is available online. The graphical installer enables you to get up and running quickly and easily. A standard installation should take less than 25 minutes. Once installed your system is immediately ready-to-use. On the desktop you have a full set of productivity, internet, drawing and graphics applications, and games. On the server you get just what you need to get up and running and nothing you don’t.”

Geek Software of the Week: CutePDF

So, you want a free way to convert any document that you can print into a PDF (Portable Document Format?) Well, look no further! All you have to do is download this freeware tool, called “CutePDF” and it’s companion utility, the free GPL Ghostscript, and install BOTH! There is a link on the CutePDF page below to download both parts:

“Create PDF documents on the fly â€” for Free! Portable Document Format (PDF) is the de facto standard for the secure and reliable distribution and exchange of electronic documents and forms around the world. CutePDF Writer (formerly CutePDF Printer) is the free version of commercial PDF creation software. CutePDF Writer installs itself as a “printer subsystem”. This enables virtually any Windows applications (must be able to print) to create professional quality PDF documents – with just a push of a button! FREE for commercial and non-commercial use! No watermarks! No Pop-up Web Ads!

Dr. Bill plays lame Geek Culture with “CyberThug,” he answers a phone call that wasn’t supposed to happen, the Tech News, and a Geek Software of the Week: Pixelformer! Talk about an “off day!” Yeeesh!

Red Hat announced that their planned “Global Desktop” release of the Red Hat operating system is slipping. Pundits thin this may give SuSE Linux an edge… we’ll see!

“Mixing technical concerns with a truckload of business issues, Red Hat has stealthily acknowledged slipping its deadline for Red Hat Global Desktop (RHGD), which might have given it an edge against Novell’s competing SuSE Linux. Unlike the existing Red Hat Enterprise Desktop (RHED), the planned RHGD is aimed exclusively at small, reseller supplied implementations in emerging geographic areas such as Brazil, China, and India. Red Hat also sponsors a community project called Fedora, which develops and maintains a free desktop product. But RHED and the forthcoming RHGD are both commercial products geared to businesses. First announced at the 2007 Summit users conference, RHGD was then expected to ship a few months later. ‘The technology side of the product is complete,’ according to a blog posting which slid quietly on to Red Hat’s Web site this week. ‘[But] there have been a number of business issues that have conspired to delay the product for almost a year,’ interjected the anonymous blogger, about midway through a more generic update on ‘What’s Going On With Red Hat Desktop Systems?’ Indeed, some of the contributing factors listed in Red Hat’s blog are unarguably business-related, including market changes and “start-up delays with resellers.’ RHGD, by the way, is supposed to be supplied by Intel channel partners in these emerging markets. Others reasons mentioned, though, lean to the technical side, including hardware changes, ‘multimedia codec licensing knotholes,’ and ‘getting the design and delivery of appropriate services nailed down.’

Geek Software of the Week: Pixelformer 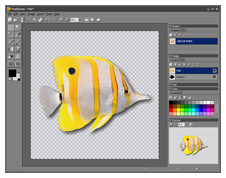 How about a free “next generation” icon editor/creation tool? If you write programs, or, if you just want to enhance your current programs with cool icons, this is a neat tool!

“Pixelformer is an advanced icon editor which is designed to give you full control over every pixel of your images. With its predictability and subpixel precision you can easily create professional quality icons and bitmaps.

The main features of Pixelformer are: