And Now… a Pocket Camcorder For Those “Don’t Taze Me, Bro” Moments! 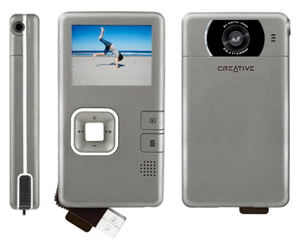 Gotta love it… a fairly cheap ($99.99) “camcorder” for videoing any weirdness you may see and then want to post on YouTube. Now, THIS is useful!

“Offering a device for individuals to keep handy just in case a ‘must record’ moment happens (‘Don’t Taze Me, Bro’ moments), Creative has unveiled its VF0570-P Vado Pocket Video Camcorder. With 2 GB of memory, and 640 x 480 VGA MPEG4 videos recording at 30 fps, Creative’s Vado has specs conspicuously similar to PureVideo’s 2 GB Flip Video. The main difference between the two is the price. The 2 GB flip carries with it an MSRP of $149.99, while the Vado shaves the price down to $99.99. Complete with two AA batteries, the unit only weighs 84 grams and claims to be able to record for 2 hours in an even further reduced quality. Like the Flip, there is a built in USB connector, a 2″ LCD screen, and an A/V out port. Though Creative and Pure both bill their devices as ‘camcorders,’ the quality offered is only marginally better than the capture quality on better mobile phones. Furthermore, a developing trend among point and shoot still cameras is the addition of HD video capture. Panasonic, Samsung, Kodak, and Canon all offer far superior video capture quality in a comparably-sized unit for only a fraction more money.”