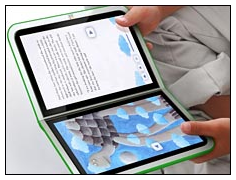 The wraps have been taken off the new version of the XO laptop designed for schoolchildren in developing countries. The revamped machine created by the One Laptop Per Child (OLPC) project looks like an e-book and has had its price slashed to $75 per device. OLPC founder Nicholas Negroponte gave a glimpse of the ‘book like’ device at an unveiling event at the Massachusetts Institute of Technology. The first XO2 machines should be ready to deliver to children in 2010. Mr. Negroponte said he hoped the design would also be used by other manufacturers. ‘This laptop comes from a different point of view,’ he said. The new version loses the green rubbery keyboard, sporting instead a single square display hinged at its center. This allows the device to be split into two touch screens that can either mimic a laptop with keyboard or the pages of a book. ‘Over the last couple of years we’ve learned the book experience is key,’ he said. The idea is for several children to use the device at once, combining the functions of a laptop, electronic book and electronic board. ‘It is a totally new concept for learning devices,’ said Prof. Negroponte. The new machine will also be more energy efficient, half the size of the first generation device and lighter to carry. It will continue to sport the XO logo in a multitude of colours so that children can personalize them. ‘The XO2 will be a bit of a Trojan horse,’ said Prof Negroponte. Initially it will be promoted as an e-book reader with the capacity to store more than 500 e-books. ‘Currently developing nations such as China and Brazil are spending $19 per student per year on books,’ he said.”