Geek Software of the Week: SpeedFan! 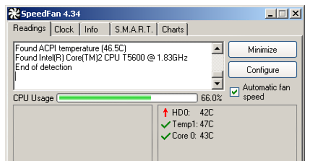 A neat little utility to let you know how your system is behaving physically… is it getting too hot, is it “healthy?” Free (of course!) and very cool! (No pun intended!)

“SpeedFan is a program that monitors voltages, fan speeds and temperatures in computers with hardware monitor chips. SpeedFan can even access S.M.A.R.T. info for those hard disks that support this feature and show hard disk temperatures too, if supported. SpeedFan supports SCSI disks too. SpeedFan can even change the FSB on some hardware (but this should be considered a bonus feature). At the lowest level, SpeedFan is a hardware monitor software that can access digital temperature sensors, but its main feature is that it can change fan speeds (depending on the capabilities of your sensor chip and your hardware) according to the temperatures inside your pc, thus reducing noise. Several sensors, like Winbond’s and the AS99127F support fan speed changing, as well as others from Maxim, Myson, Analog Devices, National Semiconductor and ITE, but the hardware manufacturer must have connected the relevant pins to some additional, yet trivial, circuitry. This means that if you have, say, a Winbond W83782D on a BP6 then you’re ok, but not every motherboard with such a hardware monitor chip will be able to change fan speeds. From one of the very first hardware monitor chips that could be found in standard PCs, the National Semiconductor LM75 (and all of its clones, like the Philips NE1617 and the Philips NE1618 or the Maxim MAX1617) or the Analog Devices ADM1021, such chips have been greatly improved, both in their precision and in their capabilities. Current chips can monitor fan speeds, voltages and change fan speeds by using PWMs (Pulse Width Modulation). Some chips can even be programmed to vary fan speeds without any additional software intervention. If your BIOS was programmed to setup such chips this way you can still try to use SpeedFan’s Advanced Configuration to revert to manual (software controlled) mode.”

I also like how it shows the temperature in the tray when it is minimized. Very neat! Check out SpeedFan! It may be what you have been looking for to monitor your system!