Geek Software of the Week: Objectdock!

Objectdock allows you to have an active, graphical dock like a Mac, on your PC! Check it out! There is a free version and a paid version… download it, try it… you will be impressed! Drag and drop your desktop icons to the dock, and watch them appear! 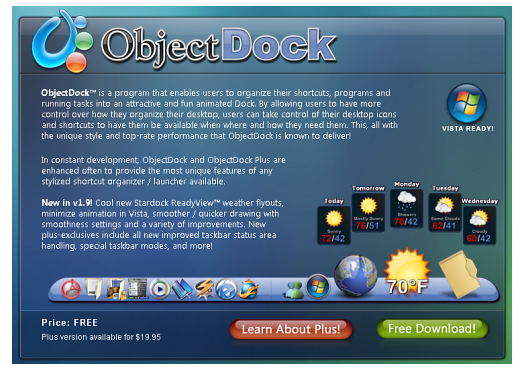 “ObjectDockâ„¢ is a program that enables users to organize their shortcuts, programs and running tasks into an attractive and fun animated Dock. By allowing users to have more control over how they organize their desktop, users can take control of their desktop icons and shortcuts to have them be available when where and how they need them. This, all with the unique style and top-rate performance that ObjectDock is known to deliver! In constant development, ObjectDock and ObjectDock Plus are enhanced often to provide the most unique features of any stylized shortcut organizer / launcher available. New in v1.9! Cool new Stardock ReadyViewâ„¢ weather flyouts, minimize animation in Vista, smoother / quicker drawing with smoothness settings and a variety of improvements. New plus-exclusives include all new improved taskbar status area handling, special taskbar modes, and more!”