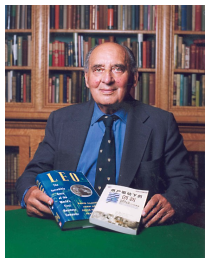 The world’s FIRST Computer Systems Analyst passed away last month. He was quite an industrious fellow! He computerized a British Tea Company back in the 50’s!

“David Caminer, the worldâ€™s first systems analyst who is credited for first discovering how to use a computer for business purposes, died on June 19 in London. He was 92. Caminer was one of the brains behind LEO (short for Lyons Electronic Office), the worldâ€™s first business computer, a distinction certified by Guinness World Records. It was 16 feet long with 6,000 valves and could store more than 2,000 wordsâ€”a major accomplishment in 1951. In fact, it was a major breakthrough in business practice, and he was promoted to director of LEO computers. New Scientist best summed up this accomplishment: ‘In todayâ€™s terms it would be like hearing that Pizza Hut had developed a new generation of microprocessor, or McDonaldâ€™s had invented the Internet.'”