Successor to the DS to be Released in April! 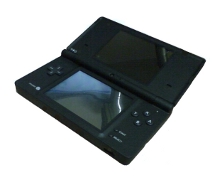 Whoa! The Gamemaster will be hitting me up for this one, I bet! Support for WPA, WiFi, and SD card support… as well as downloadable games… he’ll be all over it!

Nintendo DSi comes to US on April 5

“The DSi has been available in Japan since November, and within the first two days 170,779 units were sold, amounting to more than 85% of the initial shipment, according to Enterbrain. Both of Nintendo’s premier game systems, the Wii and DS, have consistently dominated the video game market in sales, and more than 3.04 million DS units were sold in 2008. Nintendo’s handheld systems are an evolving breed, which go through several iterations before a new generation is released. Pivotal to maintaining this evolutionary flow is backwards compatibility, and the DSi is the first of the DS generation to drop support for the previous generation, the Game Boy Advance. But where it loses the GBA cartridge slot, it has gained an SD slot, which also facilitates a slimmer chassis design and potential for a whole new family of homebrew mods. It also gives the DSi space for downloadable games, which are now available through the DSiWare app store. To connect to Wi-Fi to use the new app store or to play online games, the DSi includes support for WPA security. The DS and DS Lite did not support any security above WEP, so older games reportedly still must connect via WEP to play online, despite the DSi’s support for WPA. The DSi incorporates two cameras into the unit, which offers developers yet another kooky way to control games. The earliest DSi shop games in Japan (region locked) have only just touched upon some of the things that can be done with the cameras. While the DSi includes Photobooth-esque image capture an manipulation software which lets users draw directly on images with the touchscreen, Nintendo has not provided an official list of titles that will be ported over to the American DSi already exploiting the new feature. One title sure to hit US stores is the next sequel in the popular Brain Age series known in Japan as Chotto Brain Training. The DSi will retail for $169.99.”

You see, as a web host and webmaster, I am already master of my own domains (get it?!) So, I am down wit’ the “in crowd!”

“Facebook is five. Maybe you didn’t get it in your news feed, but it was in February 2004 that Harvard student Mark Zuckerberg, along with some classmates, launched the social network that ate the world. Did he realize back then in his dorm that he was witnessing merely the larval stage of his creation? For what began with college students has found its fullest, richest expression with us, the middle-aged.”

Author, Lev Grossman, goes on to give his 10 reasons that Facebook is for old fogies… but I especially like number 10:

“10. We’re not cool, and we don’t care. There was a time when it was cool to be on Facebook. That time has passed. Facebook now has 150 million members, and its fastest-growing demographic is 30 and up. At this point, it’s way cooler not to be on Facebook. We’ve ruined it for good, just like we ruined Twilight and skateboarding. So git! And while you’re at it, you darn kids better get off our lawn too.”

“Ready to party like it’s 1234567890? Computer lovers certainly are. Thatâ€™s because at precisely 23:31:30 GMT tonight (Friday), the ten-digit clock used by Unix computers – which includes the servers that run everything from the internet to air traffic control – will display all ten decimal digits in sequence. For computer geeks everywhere, this seemingly dubious milestone deserve celebrations just like those that greeted the end of the millennium. Parties are planned around the world from London to New York, to Yerevan in Armenia and AsunciÃ³n in Paraguay. But after the brief flash of joy, comes the dread. Computer scientists fear the worst for the next major moment in Unix time – some time in the year 2038, when the Unix clock will run out of seconds it can count. On that January day, computers will fail to compute time, and crash. Your computer could shut down. Vehicles may pile up as traffic lights fail. Planes could fall out of the sky. The advice is to party now, because the digital apocalypse may soon be upon us. Understanding how this will happen requires you to do away with your parochial understanding of time, and instead think more like a machine. You, being human, were under the impression that today was merely Friday February 13 in the year of our Lord, 2009. Computers count time differently. They simply count the seconds from ‘Co-ordinated Standard Time,’ or to human beings, the seconds elapsed from midnight, January 1, 1970 – the digital equivalent of the birth of Christ. Unix time is how many seconds there have been since then (not including leap seconds, in case you were wondering). But why is 1234567890 a more significant moment in time than any other sequence of numbers? ‘All calendars are just arbitrary,’ argues Julian Burgess, a web developer from London. ‘Celebrating the millennium – why do that? It was just like any other day, the Earth rotates on its axis and it moves around the Sun. All these things are arbitrary, so for geeks to celebrate Unix time is something for them to enjoy.'”

No… Microsoft would never make a Silverlight for Linux… but Open Source developers would! And here it is:

Moonlight is an Open Source implementation of Silverlight for Linux. Weird, but cool! I have come to prefer Flash, and it is more widely accepted, but it is cool that developers have been able to develop Moonlight!

Ever wanted to pull just the raw text from a secured PDF file? Well, with this freeware tool, you can!

“A-PDF Text Extractor is a free utility designed to extract text from Adobe PDF files for use in other applications. There are three mode of output text: In PDF Order, Smart Rearrange and With Position. Learn more about the output type here. The program is freeware, which means that you can use it either personally or commercially for free. The program is a standalone application; no Adobe Acrobat needed. A command line version is available also to allow you to call in your program or script. If you want to grab images from PDF files, you may check out the A-PDF Image Extractor.”

This free, Open Source Internet TV client is just getting better and better! Miro rocks! Check it out!

* “A beautiful, all-new widget based interface
* Browse while you watchâ€“ pop out any video to an external window (our number one requested feature)
* Miro is now faster, more responsive, and uses less memory
* You can add streaming sites like Hulu to your sidebar (note: streaming with Flash only works in Windows and OSX)
* You can add download sites like Archive.org or legaltorrents.com to your sidebar and download to Miro with a single click
* Improved playlists
* New compact, sortable list view
* Better audio support”

I posted a great “add-on” for those of you that use DirCaster, the Open Source way to make your audio, or video files available via an RSS feed! The new add-on is “PHPstream,” a tool to stream flash video from your web server, using PHP, the server-side scripting language! Check it out on the DirCaster Downloads page:

Our ol’ buddy Henry Ratliff has released a new feature requested in the forum for DirCaster, the ability to change Time Zone info on your feed. Check it out at the DirCaster web site:

The New Kindle 2 is Out!

It looks cool… and I want one! (But then, I wanted the original one and never got around to getting it.) Sigh. Well, hopefully this time I will get it!

“At Amazon, we’ve always been obsessed with having every book ever printed, and we know that even the best reading device would be useless without a massive selection of books. Today, the Kindle Store has more than 230,000 books available, plus top newspapers, magazines, and blogs. This is just the beginning. Our vision is to have every book ever printed, in any language, all available in under 60 seconds on Kindle. We won’t stop until we get there. Whether you prefer biographies, classics, investment guides, thrillers, or sci-fi, thousands of your favorite books are available, including 103 of 110 books currently found on the New York TimesÂ® Best Seller list. New York Times Best Sellers and most new releases are $9.99, and you’ll find many books for less.”

The new version improves scalability, hosting twice as many virtual desktops per server as previous versions, and enhanced graphics capability!

“Citrix Systems, Inc., the global leader in application delivery infrastructure, today announced CitrixÂ® XenDesktopâ„¢ 3, the newest release of its market-leading desktop virtualization solution. XenDesktop 3, a key component of the Citrix Delivery Centerâ„¢ product family, incorporates several of the companyâ€™s new CitrixÂ® HDXâ„¢ technologies (see separate announcement today), giving virtual desktop users a richer â€œhigh-definitionâ€ experience with enhanced support for multimedia, audio and video. XenDesktop 3 also dramatically improves scalability, hosting twice as many virtual desktops per server as previous versions. And with version 3, XenDesktop becomes the first product on the market to deliver MicrosoftÂ® WindowsÂ® desktops from a common set of centrally managed images that can be run either in the datacenter (hosted), or directly on a PC or thin client device (local). This new capability gives IT organizations far more flexibility, reducing desktop management costs by making efficient use of distributed processing power across both servers and end point devices.”