One Small Step for Man…

I have always been a “Space Junkie!” I can remember in grade school listening to a small radio via earphones (super-early iPod-like activity!) of space missions like Mercury and Gemini… then on the moon landing… I was in Idaho at the National Boy Scout Jamboree… I was 13 years old… and I was following the moon landing via that small radio. Later that night, we got to see the moon walk on a GIANT screen at the Campfire. WOW! Now, if we could only get the Space Program BACK in gear!

Congrats to the three men that were heroes to us all on the 40th (choak!) Anniversary of the Moon Landing!

Our government is stupid. Anybody that has dealt with bureaucracy knows this… but, imagine, the State Department would like Clinton to allow them to use a FREE (that means no cost) SAFER web browser (you would think that would be important at the State Department)… but wait! It is TOO EXPENSIVE! Did I mention it is FREE? Oh, but it would take too much overhead to keep it patched! But wait, it notifies the user and can be patched with one click… for FREE! OK!!!

Dept. of State Would Like to Use Firefox… but Can’t!

“Despite the rise of open source within the federal government, Mozilla’s Firefox has yet to gain an official nod from the Department of State, at least according to a recent question-and-answer session that Secretary Hillary Clinton and Under Secretary Patrick Kennedy hosted last week, with an ironic back-and-forth on Firefox kicked off by government employee Jim Finkle:

Finkle: Can you please let the staff use an alternative Web browser called Firefox? I just–(applause)–I just moved to the State Department from the National Geospatial Intelligence Agency and was surprised that State doesn’t use this browser. It was approved for the entire intelligence community, so I don’t understand why State can’t use it. It’s a much safer program. Thank you. (Applause.)

Kennedy: The answer is, at the moment, it’s an expense question. We can —

Kennedy: Nothing is free. (Laughter.) It’s a question of the resources to manage multiple systems. It is something we’re looking at. And thanks to the secretary, there is a significant increase in the 2010 budget request that’s pending for what is called the Capital Investment Fund, by which we fund our information technology operations. With the secretary’s continuing pushing, we’re hoping to get that increase in the Capital Investment Fund. And with those additional resources, we will be able to add multiple programs to it.

Yes, you’re correct; it’s free, but it has to be administered, the patches have to be loaded. It may seem small, but when you’re running a worldwide operation and trying to push, as the secretary rightly said, out fobs and other devices, you’re caught in the terrible bind of triage of trying to get the most out that you can, but knowing you can’t do everything at once.”

Ignorance can be cured, but there’s no cure for stupid!

In Honor of Today Being Nikola Tesla’s Birthday… Geek Culture!

Nicola Tesla, inventor of many high tech things would have been 153 today… so here you go… happy geeky celebration! 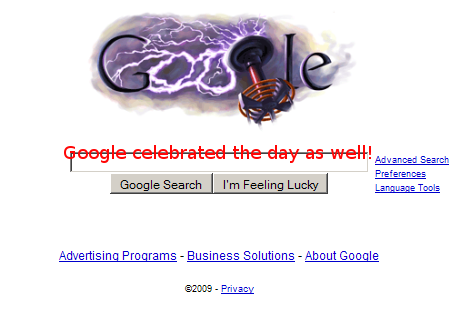 M$ (Microsoft, for you that don’t regularly follow my Blog) just released the new version of their Flash alternative, Silverlight… now at version 3.0.

“After going live just a little bit early, Silverlight 3 is now an official release. The third iteration of Microsoft’s rich internet application platform largely viewed as the chief competitor to Adobe Flash (but really an AIR rival) was officially launched this morning at a Microsoft event in San Francisco alongside Expression 3, the latest version of the company’s design and development studio. In the short time that it has been around, Microsoft said today that nearly one-third of all Internet-enabled devices have Silverlight 2 installed, and today’s launch ushered in several new big-name customers. NBC Sports, for example, which used Silverlight to stream the Beijing Summer Olympics, will not only use Silverlight for the 2010 Winter Olympics as was previously expected, but for all of its online video moving forward. NBC Universal and the rest of the companies using Silverlight will be able to capitalize on the latest developments to the platform, which Microsoft premiered incrementally this year after Silverlight 3 was released in beta at MIX 09 in March.”

99% of the world uses Flash… Silverlight is light, fast, and may even be cool… but, it doesn’t have the marketshare, one of the few M$ products that doesn’t… what does that say?

OK, so local (Triad) Time Warner has me ticked off! I watch the SciFi (excuse me, now, “SyFy”… yuk!) Channel for “Eureka” and “Warehouse 13” as well as the few other ACTUAL SciFi programs on SyFy… sigh, indeed! Anyway, what ticks me off is that they turn UP the audio level on LOCAL cable commercials… while preempting the “network” commercials (always a few milliseconds too late!)

Anyway, I am sure that they are telling the local commercial buying companies that this “increasing the volume” bit is a GREAT idea to catch people’s attention… well, guess what, local vendors that are paying good money for your commercials to run… I sit with my finger on the MUTE button, and as soon as they blare out at me, I happily, gleefully, with MALICE… hit the MUTE BUTTON to silence the commercial… so, I NEVER HEAR YOUR MESSAGE!!!! So there! Time Warner… are you listening??? You are “out-smarting” yourself, OK?!?!? We aren’t listening to your LOUD COMMERCIALS! Anybody else out there doing what I am doing?!? If so, write them… send me comments to this post… let me know I am not the only one ticked off!!!

Microsoft has patches for you… hot off the press!

“Critical Patches
Critical patch No. 1 will be designed to stave off RCE exploits for all supported Windows OS versions.

The second critical item will be aimed at patching the DirectX multimedia control solution, a favorite complaint of security gadflies. This patch will affect DirectX versions 7.0, 8.1 and 9.0 running on systems using Windows XP, Windows 2000 and Windows Server 2003.

Microsoft has issued other security advisories about ActiveX in recent times. In May, Microsoft began an investigation of a DirectX bug in its DirectShow framework for multimedia files. In June, the company announced it was investigating a potential DirectX bug in Internet Explorer.

Depending on which components are included in Tuesday’s announcement, July looks to be a reasonably busy month for IT pros. The entire slate of patches may require restarts.

As usual, those interested in nonsecurity updates may want to check out the monthly knowledgebase article. Microsoft has accompanied every security patch release with nonsecurity updates for more than a year now. Those items include a new Malicious Software Removal Tool and spam filter updates. Changes for Vista and Windows Server 2008 are also on tap via Windows Update, Microsoft Update and Windows Server Update Services.”

Google Gets Into the OS Wars!

The Official Google Blog says that they are developing an Open Source Operating System starting out for Netbooks… and, then the world! Well, OK, I added the last part! Anyway, I like the fact that they are big enough to give Microsoft a run for their money! Competition is GOOD!

“It’s been an exciting nine months since we launched the Google Chrome browser. Already, over 30 million people use it regularly. We designed Google Chrome for people who live on the web â€” searching for information, checking email, catching up on the news, shopping or just staying in touch with friends. However, the operating systems that browsers run on were designed in an era where there was no web. So today, we’re announcing a new project that’s a natural extension of Google Chrome â€” the Google Chrome Operating System. It’s our attempt to re-think what operating systems should be. Google Chrome OS is an open source, lightweight operating system that will initially be targeted at netbooks. Later this year we will open-source its code, and netbooks running Google Chrome OS will be available for consumers in the second half of 2010. Because we’re already talking to partners about the project, and we’ll soon be working with the open source community, we wanted to share our vision now so everyone understands what we are trying to achieve. Speed, simplicity and security are the key aspects of Google Chrome OS. We’re designing the OS to be fast and lightweight, to start up and get you onto the web in a few seconds. The user interface is minimal to stay out of your way, and most of the user experience takes place on the web. And as we did for the Google Chrome browser, we are going back to the basics and completely redesigning the underlying security architecture of the OS so that users don’t have to deal with viruses, malware and security updates. It should just work. Google Chrome OS will run on both x86 as well as ARM chips and we are working with multiple OEMs to bring a number of netbooks to market next year. The software architecture is simple â€” Google Chrome running within a new windowing system on top of a Linux kernel. For application developers, the web is the platform. All web-based applications will automatically work and new applications can be written using your favorite web technologies. And of course, these apps will run not only on Google Chrome OS, but on any standards-based browser on Windows, Mac and Linux thereby giving developers the largest user base of any platform.”

Rock on… I wish them well!

Ever needed to resize a live disk volume? I did recently… and you know me… I gotta find a free way to do it! So, another GSotW! EASEUS Partition Master! This program rocks! There is a free home version, and a very reasonably priced Pro and/or Server Version if you need 64 bit support!

Check this one out! “EASEUS Partition Master Home Edition is a FREE disk partitioning utility for extending system partition, better disk space management, settling low disk space problem under Windows 2000/XP/Vista (for 32bit Only.) What’s more, the freeware works perfectly with hardware RAID and laptops like HP, Dell, etc. Your data is completely protected during all operations. Why not free download this free magic partition software and enjoy it like the commercial partition program? If your computer is running 64 bit Windows systems, please check Professional or Server editions.”

VLC Player is the BEST video/audio player available… supporting more file formats than most people will ever encounter… truly a player for geeks! And, now, it has reached the gold version of “1.0”… in Open Source-speak that is truly “production!” So, download and enjoy! And, Gmail and other Google apps came out of Beta today… there must be a convergence of the stars, or something!