Google Chrome 5.0 Has Been Released! 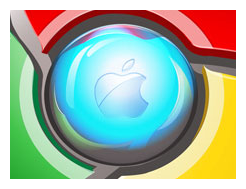 Go get it! Faster, cooler, built-in Flash support! Rock on!

“Google announced today the official release of Chrome 5 for Windows, Linux, and Mac OS X. It arrives less than a month after Google made the new version available through its beta channel. This release reflects Chrome’s rapid pace of evolution and Google’s strong commitment to advancing Web technology and performance. Chrome 5 brings significant performance improvements, including a major increase in JavaScript execution speed. It also brings support for important HTML5 features, including Web Sockets and drag-and-drop. The JavaScript acceleration and robust compatibility with emerging standards are important capabilities that will enable developers to write richer and more sophisticated Web applications. Google has enhanced the browser’s cloud synchronization framework, extending it to support browser preferences and themes in addition to bookmarks. Chrome 5 ships with the Flash plugin included by default, an addition that was made possible by Google’s recent partnership with Adobe. This release marks a significant milestone for the browser, because it is the first official stable release of Chrome for Mac and Linux. Chrome was previously only distributed for those platforms in the form of beta and developer builds.”