A Personal Request: Support Our Advertisers!

Continuing the Dr. Bill.TV Netcast and Blog is a heavy commitment of time, effort and energy! But, you guys have spoken loud and clear that you like it! Thanks so much! To keep the ball rolling, so to speak, please consider clicking through (and buying from) our advertisers… right now, they are:

Thanks SO MUCH for your support!

Geek Software of the Week: LibreOffice! 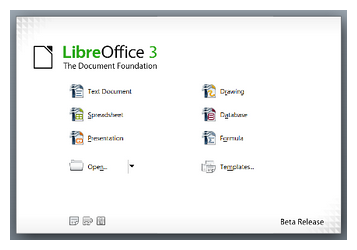 It is out, it is Final! And, to celebrate, I am granting it GSotW status! Wha hoo! Go for it, Document Foundation Team! Good job! Now, Download away!

From the Release Announcement:

The Internet, January 25, 2011 – The Document Foundation launches LibreOffice 3.3, the first stable release of the free office suite developed by the community. In less than four months, the number of developers hacking LibreOffice has grown from less than twenty in late September 2010, to well over one hundred today. This has allowed us to release ahead of the aggressive schedule set by the project. Not only does it ship a number of new and original features, LibreOffice 3.3 is also a significant achievement for a number of reasons:

– the developer community has been able to build their own and independent process, and get up and running in a very short time (with respect to the size of the code base and the project’s strong ambitions);

– thanks to the high number of new contributors having been attracted into the project, the source code is quickly undergoing a major clean-up to provide a better foundation for future development of LibreOffice;

– the Windows installer, which is going to impact the largest and most diverse user base, has been integrated into a single build containing all language versions, thus reducing the size for download sites from 75 to 11GB, making it easier for us to deploy new versions more rapidly and lowering the carbon footprint of the entire infrastructure.”

Dr. Bill recommends MacConnection! A cat to do jury duty! Microsoft promotes the new HTML5 logo and WebMatrix, a web editor! However, there is always KompoZer and PSpad! Use instantwatcher.com for Netflix. Duke Nukem Forever, will it be out soon?

Duke Nukem Forever, the most delayed video game ever, launches May 3

“Last September, 2K Games and Gearbox Software announced they would finally be releasing Duke Nukem Forever on Windows, Xbox 360, and PlayStation 3 after a delay of more than a decade. On Friday, the companies published the title’s final release dates: May 3 in North America, and May 6 worldwide.

Even after 2K and Gearbox demonstrated the game’s release at the Penny Arcade Expo in Seattle, there was a considerable amount of doubt and speculation from the public about the game’s release. After all, it unofficially holds the title of “most delayed game of all time,” with nearly thirteen years between the title’s first announcement and its eventual release. Naturally, the sudden news that it would be released should be met with a large amount of skepticism.”

I guess we will see come May! (I am not holding my breath!)

So, you are a Netflix user (like I am) and want to search Netflix, (with your shiny, new Roku, like me!) But, the clunky Netflix interface has you frustrated! Is that your problem, dewd?!? Well, this guy wrote a search site using the Netflix API! The trick is to log into your Netflix account FIRST… THEN go to this site:

Search by most popular, search by genre, or, check out the “Worst of” list! (Weird!) Anyway, free, cool, and very helpful!

“…WebMatrix, a tool that lets users create, build and deploy websites based upon the web technologies and content management systems of their choosing. The goal of the software is to be an extremely simple, lightweight development environment that eliminates the need for switching back and forth between other applications while developing websites.

Sites can be built from templates or from scratch, and more than 40 open source web applications are supported, like the popular WordPress, Joomla, DotNetNuke, and more, and files can then be edited in HTML, CSS, ASP.NET or PHP. Naturally, Microsoft put some special shine on ASP.NET in WebMatrix and included support for the ‘Razor’ view engine and special single-line-of-code helper functions to integrate with external social and commercial services.” 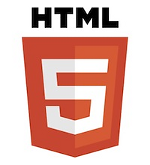 Will YOU use it? They are pumped up that their new IE 9 browser will support HTML 5, I guess! Good for them! They haven’t exactly been supporters of web standards before this! Oh well…

“I’m not doing cartwheels over the new HTML5 logo, which reminds me of a superhero badge. It’s bold, masculine and sort of orange, which will appeal how to the majority of web users? But the logo is a great idea, and it’s big splash promotion — some of that from Microsoft — is exactly what the standard-in-progress needs right now.

Today in a blog post, Jean Paoli, Microsoft’s general manager of interoperability, writes: ‘The logo links back to W3C, the place for authoritative information on HTML5, including specs and test cases. It’s time to tell the world that HTML5 is ready to be adopted.’

There’s a strange appropriateness to Microsoft promoting the logo’s use. It’s what the company did in the late 1990s to promote Internet Explorer. During the so-called browser wars between Microsoft and Netscape, each side adopted proprietary tags not necessarily supported in the other’s browser. Microsoft encouraged websites supporting Internet Explorer to put up an IE logo/badge — to be proud, to proclaim their support. As a marketing mechanism, the logo branding was brilliant and quite uncommon.

I remember interviewing Sun cofounder and then chief executive Scott McNealy in his office about Java; some time in 1997. McNealy, an avid amateur hockey player, limped from an injury on the ice from the night before. I scolded McNealy, calling him a boy who cried wolf, for making promise after promise after promise about Java — like powering light switches — that never came to be. He didn’t get upset at that but my accusations about Java branding. I observed that Internet Explorer logos were on tens of thousands of websites, while Java was seemingly nowhere. If developers are using Java, why are they keeping a secret, I accused. McNealy responded by pointing across the room at his Java terminal and the tiny logo on the side. He blamed his marketers for not listening.”

So… what do you think? 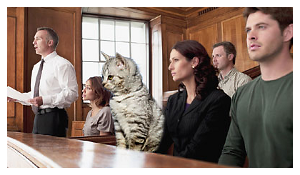 My cat WOULD do a better job than some jurors! So, maybe this isn’t as weird as it might seem!

But, then again, this IS in California!

“A cat has been summoned to do jury service in the US – even after his owners pointed out he was ‘unable to speak and understand English.’

Anna Esposito, wrote to Suffolk Superior Crown Court in Boston, to explain that a mistake had been made, reports the Daily Telegraph.

But a jury commissioner replied insisting that the cat, named Tabby Sal, ‘must attend’ on March 23.

Mrs Esposito had included a letter from her vet confirming that the cat was ‘a domestic short-haired neutered feline.’

Tabby Sal had been entered by Mrs Esposito under the ‘pets’ section of the last census.

She asked: ‘When they ask him guilty or not guilty? What’s he supposed to say – miaow?’

‘Sal is a member of the family so I listed him on the last Census form under pets but there has clearly been a mix-up.’

A website for the US judicial system states that jurors are “not expected to speak perfect English.”

Live coverage of CES 2011 from Techpodcasts.com on the Dr. Bill.CC web site! Tech News this week! 41% of smartphone users now use Android! Use GoDaddy for Web Hosting! Geek Software of the Week: FreeOCR! Geek Culture: The Homeless Guy with the Golden Voice! Will tablets finish off netbooks?