Geek Culture: YES! This is a Cat!

Geek Culture time again! Check out this animated GIF, if you have a cat, then you will know what I’m talking about!

Windows 8 Will Have REAL Roaming Profiles… In The Cloud!

I work will profiles all the time due to my work as a Citrix admin, they can be tricky! But, this may be an interesting “take” on roaming profiles if they work out! I am not sure about having my PC user profile stored at Microsoft! Kinda makes me shutter a little!

“While it was already known that Windows 8 would feature heavy Windows Live cloud integration, the actual extent of that integration will likely continue to take shape as development progresses on the upcoming OS. One more aspect has now been uncovered, thanks to Windows 8 enthusiasts over at My Digital Life: Windows 8 will support roaming profiles when linked to your Windows Live account. Roaming profiles have been an enterprise feature of Windows since the days of NT.

As you can see, all the personalization bases are covered — from your wallpaper and Aero Glass settings to stored credentials and Explorer and taskbar preferences. Application data can be included as well, which has me particularly excited. It’s cool enough to be able to sync my browser profiles, but it would be better still to have my Microsoft Office, Photoshop, and other applications’ preferences running seamlessly in step across all my Windows systems.”

Geek Culture: How to Be a Ninja!

[Begin metatag Proud Papa]
This is my son, the Gamemaster’s, video for his HPU class in New Media. It is a “How To” video, but with his usual comic slant! It stars my nephew, Josh Wood, and was shot (using his Droid X) and edited by Ben (Gamemaster ZX.) Also, our kitty, Tiger, is in it… but as Ben says, she was not hurt in the process. Check it out!
[/End metatag Proud Papa]

Dewd! Sometimes a Geek Software of the Week just totally meets a need at the moment that you need it, and this is one that did that for me! I needed a handy way to quickly encrypt text files so that if you managed to get a hold of it, it would be useless to YOU, but important and easy to encrypt for ME! Done and done!

“Protect the data in your email, your contacts, and more with Quick Encrypt. This extension will save a common password and allow you to quickly encrypt and decrypt the contents. To use the extension follow these easy steps.

– Enter you password in the Key field. (Only once. The computer will remember your password.)
– Enter the message to be encrypted (a bank account number, a very personal message, etc.) in the Phrase field.
– Click Encrypt to create a safe and copyable code.
– Click Undo if you made a mistake.
– Save, Forward, or whatever.

Use Quick Encypt to pass a note to a friend, forward a password to a friend, or store a social security number in an archived email message.”

Granted, it is for Google Chrome…. but, what else would you be using anyway, right? Grin!

It’s here! And, this is good news, unlike the “Superman renounces citizenship” post (which I am still bummed about!) Ubuntu is growing, looks cooler than ever, and, biggest high point… is FREE, unlike Windows!

The free and open source Linux distribution, which entered beta about a month ago, is now ready for download for laptops, desktops, netbooks and servers from the project’s Web site, offering computer uses around the globe a no-cost, feature-packed alternative to Microsoft Windows and other operating systems.

Users of Ubuntu 10.10 will be offered an automatic upgrade to 11.04 via the Update Manager. Further information about upgrading can be found on the Ubuntu site.

Standard maintenance updates will be provided for Ubuntu 11.04 for 18 months, through October 2012. The current Long Term Support (LTS) version is Ubuntu 10.04, with another one expected in April 2012. The next major release following Ubuntu 11.04 will be 11.10 ‘Oneiric Ocelot,’ which is slated to arrive in October.”

What Have We Come To? Superman Renounces His American Citizenship! 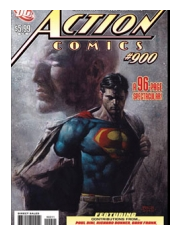 Sigh. What a weird headline. I grew up with Superman. I blame DC Comics… and the commies. Dang.

Superman Renounces His Citizenship in 900th Issue of ‘Action Comics’

“Superman is no longer an American. In ‘Action Comics’ new record-breaking 900th issue, the fictional iconic super hero renounces his U.S citizenship following a clash with the federal government. The Man of Steel, created by Jerry Siegel and Joe Shuster in 1938, has always been recognized as a devoted American warrior who constantly fought evil, but as of Thursday, he is no longer the country’s own to claim. No word yet if Superman will change his red and blue suit, or his longtime motto ‘truth, justice and the American way’ — but the landmark issue is certainly sparking controversy.”

The Internet Coupon market is huge, and getting bigger. I can remember back in 1996, the small web company I was working for thought web coupons were a great idea! (Of course, we were so far ahead of our time, no business understood what the web even was!) Sigh. Anyway, Facebook is experimenting with coupons now too!

“(Reuters) – Facebook began offering users in five U.S. cities coupons for everything from wine tastings to concert tickets on Tuesday, turning up the competitive heat in an increasingly crowded market.

The special Deals coupons, which Facebook users can purchase directly on its service, offer discounted prices or access to limited-availability goods. Facebook will take a cut of each transaction, though the company declined to say how much.

With the new service, Facebook becomes the latest Internet heavyweight to jump into the red-hot daily deals market pioneered by Groupon a few years ago. Last week, Google Inc began marketing a new daily deals service dubbed Offers to users in Portland, Oregon, with plans to expand to San Francisco and New York, and Amazon.com invested $175 million in LivingSocial in December.

‘Although the market has seen huge growth and there are big players already there, it’s not something that’s locked down, said Ray Valdes, an Internet analyst at research firm Gartner.

‘I expect to see churn among the vendors as they try one thing and it works for a while and other vendors find new ways of better meeting users’s needs,’ he said.

Facebook, the world’s No.1 social network with more than 500 million users, is betting that social interaction will help set it apart from the dozens of companies currently offering online daily deals.

The coupons available on Facebook are specifically geared toward group activities, such as a river rafting trip, rather than for individual items such as a discounted pair of jeans. Facebook users can easily recommend interesting-looking deals to their friends on the service.”

So, will you get your coupons off Facebook? Hummmmm?

I Told You They’d Say It!

See… just like I said in the last Netcast… Apple is pretty much saying “Nanna, nanna, boo, boo!” Sigh. Figures.

Your Android phone is tracking you

“While everyone is crying foul that the iPhone is tracking users, people should be aware that their Android phone has been doing the same thing.

Yes, it seems like Google’s little green robot is also collecting user data every few seconds and sending it off to Google. Data which includes GPS location, Wi-Fi hotspots the phone has encountered, and the device ID. The difference between the data that Google is harvesting versus what is going on with the iPhone is that users have to opt in for their data to be collected.”

Today’s Geek Software of the Week is very unusual in that it is a feature built into Windows 7! This feature is called Windows Easy Transfer. The software is based on an application that used to be a separate utility called AlohaBob. Microsoft bought the company that made this product and is now incorporated directly into Windows 7. Now you have the advantage of the original utility, but it’s built right into the product! However, a lot of folks don’t know about this feature. I heard about it on Revision3’s Tekzilla, and wanted to share it with you because it meets a need that a lot of people have asked about before. That is, the ability to transfer a lot of files and personal information, including profile information, from one computer to another. For inmstance, when you rebuild the computer. So, this is a very handy utility, and I think you’ll find it extremely useful if you’re moving from one computer to another or, are rebuilding a computer. The link below gives you a link to Microsoft’s page describing the product. Once again, it’s built into Windows 7 and it’s FREE!

As many folks as have asked me about this… I know it will be popular! It order to find it, just type “Windows Easy Transfer” into your Windows 7 Start Search line. Cool!