Geek Software of the Week: MediaLister! 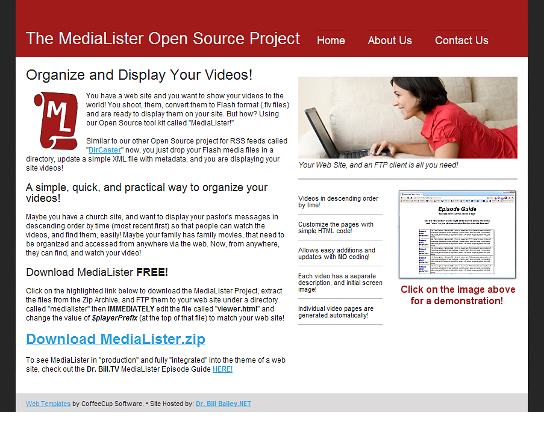 Yes, I am declaring our own, new Open Source project, Medialister, the GSotW! So what!?! Naaah! I am just that proud of what our own master PHP guru, Henry Ratliff, hath wrought! Both DirCaster and MediaLister are sponsored and maintained by Dr. Bill Bailey.NET! Check out the MediaLister web site:

“You have a web site and you want to show your videos to the world! You shoot, them, convert them to Flash format (.flv files) and are ready to display them on your site. But how? Using our Open Source tool kit called ‘MediaLister!’

Similar to our other Open Source project for RSS feeds called ‘DirCaster‘ now, you just drop your Flash media files in a directory, update a simple XML file with metadata, and you are displaying your site videos!”

So, this is also the official “kick-off” announcement, stay tuned as it grows and develops! Check it out in production on the new, and improved, (thanks to MediaLister) Dr. Bill.TV Episode List!

Apple Final Cut Pro X Seems to Stinketh, But Don’t Take My Word For It!

Check out what Conan O’Brien’s editing team thinks of it!

“Apple released Mac OS X 10.6.8 yesterday in preparation for its Lion release. There are several things to like about the new update, including changes to Final Cut Pro X as well as enhancements to the Mac App Store ahead of the release of Lion.

Overlooked in the update is the fact that Apple has included a fair amount of security updates in the software. When it comes to Apple, people always want to talk about what is cool and sleek and fun to use. Yet, as the fake anti-virus malware Mac Defender has shown us, Apple is becoming more of a target for malicious hacks. Apple releases security updates with each version of Mac OS X. Let’s take a look at what is significant in version 10.6.8.

According to the Sophos Naked Security blog, the most important fixes concern ‘arbitrary code execution.’

‘That’s computer-speak for ‘allow a bad guy to run malicious code on your computer, without your authorization,'” wrote Graham Cluley of Sophos.'”

The Gamemaster will be bummed… though, actually, I don’t think he played it much… and, apparently neither did other folk!

“It seems Star Wars Galaxies won’t have to worry about competing with the upcoming BioWare MMO Star Wars: The Old Republic. SOE plans to shut down Galaxies by the end of the year.

Galaxies will end on December 15th. The announcement comes just two days before the MMO celebrates its eighth birthday.

‘Galaxies has been a part of all our lives for so many years that it’s really going to be hard to see it end,’ reads a letter from producer Tony ‘Teesquared’ Tyson. ‘It has meant different things to each of us. For some it’s about combat. For others it’s about socializing, or crafting, or collecting, or decorating, or fishing, or adventuring, or more. For all of us, though, Galaxies is about sharing experiences with our friends.'”

Downloading it now to see if it is faster! It also has a new “do not track” feature.

“Mozilla, a global, nonprofit organization dedicated to making the Web better, today released a new version of Mozilla Firefox for Windows, Mac, Linux and Android. The new version of Firefox comes on the heels of the wildly successful release of Firefox 4, which had more than 200 million downloads on Windows, Mac and Linux and millions of downloads in the Android Market.

The latest version of Firefox includes more than 1,000 improvements and performance enhancements that make it easier to discover and use all of the innovative features in Firefox. This release adds support for more modern Web technologies that make it easier for developers to build amazing Firefox Add-ons, Web applications and websites.

Firefox for Android includes the Do Not Track privacy feature in this release, making Firefox the first browser to support Do Not Track on multiple platforms. Mozilla created Do Not Track to give users more control over the way their browsing behavior is tracked and used on the Web. The feature, which lets users tell websites that they wish to opt-out of online behavioral tracking, is now easier to find in Firefox Preferences.”

Now when you are out and about and need to connect to a public WiFi, you can do so safely, with this week’s GSotW: AnchorFree HotSpot Shield!

“Ensure you are private, secure, and anonymous online!

New version, security enhancements, and a stable version (3.3.3) for the remainder of the year… go for it! And, if you are an “early adopter” go for 3.4!

“The Document Foundation announces the availability of LibreOffice 3.3.3, a new release of the most stable version of the free office suite for personal productivity, targeting corporate users. LibreOffice 3.3.3 is already available for download at the following address: https://www.libreoffice.org/download.

According to Thorsten Behrens, a developer and member of the TDF Steering Committee, ‘LibreOffice 3.3.3 fixes several bugs and improves the security of the suite, to specifically address the needs of corporate deployments, where stability is more important than new features. This branch will be maintained until the end of the year, to allow a smooth and safe transition to LibreOffice 3.4.x.’

LibreOffice 3.3.3 is available for Windows, MacOS X and Linux (DEB and RPM), in over 100 different languages (more than twice the language coverage of comparable proprietary products). Users of LibreOffice 3.3.2 are invited to update their software.