The Amazon “Kindle Tablet” is Real, and Coming Soon!

This could finally give the iPad a run for its money, since it costs HALF what an iPad costs! Zowie!

Amazon’s Kindle Tablet Is Very Real. I’ve Seen It, Played With It.

“It’s called simply the ‘Amazon Kindle.’ But it’s not like any Kindle you’ve seen before. It displays content in full color. It has a 7-inch capacitive touch screen. And it runs Android.

Rumors of Amazon making a full-fledged tablet device have persisted for a while. I believe we were one of the first to report on the possibility from a credible source — the same person who accurately called Amazon’s Android Appstore. That source was dead-on again, it just took Amazon longer than anticipated to get the device ready to go. They’re now close.

How do I know all of this? Well, not only have I heard about the device, I’ve seen it and used it. And I’m happy to report that it’s going to be a big deal. Huge, potentially.

First of all, before every commenter asks, no, sadly, I don’t have any pictures to share. That was the one condition of me getting this information. So instead you’ll have to rely on my prose to draw a picture of the device in your head. Or you can just look at a BlackBerry PlayBook — because it looks very similar in terms of form-factor.

So here’s what I know and what I saw:

Again, the device is a 7-inch tablet with a capacitive touch screen. It is multi-touch, but from what I saw, I believe the reports that it relies on a two-finger multi-touch (instead of 10-finger, like the iPad uses) are accurate. This will be the first Kindle with a full-color screen. And yes, it is back-lit. There is no e-ink to be found anywhere on this device.

Earlier this week, reports suggested that a 7-inch Amazon tablet could be released in October, with a larger, 10-inch version to follow next year. That’s somewhat accurate. As of right now, Amazon’s only definitive plan is to release this 7-inch Kindle tablet and they’re targeting the end of November to do that. The version I saw was a DVT (Design Verification Testing) unit. These have started floating around the company. It’s ready, they’re just tweaking the software now. If it’s not in production yet, it will be very soon.”

Geek Software of the Week: WinPatrol! 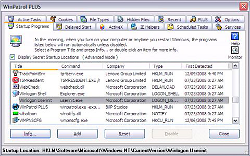 This week’s GSotW helps keep you safe as you surf! And, these days, there are a bunch of hazards as we mozy around the ‘net! You don’t have to be surfing “bad” sites, some good sites are getting hijacked and turned into malware sites! WinPatrol helps keep you safe on-line!

“You don’t have to be doing anything wrong on the Internet to become a casualty of malware. WinPatrol takes snapshot of your critical system resources and alerts you to any changes that may occur without your knowledge. WinPatrol was the pioneer in using a heuristic behavioral approach to detecting Zero-Day attacks and violations of your computing environment. WinPatrol continues to be the most powerful system monitor for its small memory footprint.

WinPatrol’s easy tabbed interface allows you to explore deep inside your computer without having to be a computer expert. A one-time investment in WinPatrol PLUS provides a unique experience you won’t find in any other software.”

Yep, you read that right… they are actually dropping back to FC Pro 3! Talk about an epic fail of a product in FC Pro X!

“In a move to sell off existing stock, Apple is once again selling Final Cut Studio 3, the professional video-editing software it discontinued earlier this year.

An Apple spokeswoman told CNET that the software was still retired.

‘As we’ve done before with many end-of-life software products, we have a limited quantity of Final Cut Studio still available through Apple telesales to customers who need them for ongoing projects,’ the spokeswoman said.

Apple faced a similar backlash in the transition from iMovie HD 6 to iMovie ’09, with the newer version of the bundled iLife software undergoing a complete overhaul. As a result, Apple offered a free downloadable copy of iMovie HD 6 to users who wanted to continue to use the older version while upgrading to the rest of the iLife suite.”

Firefox 8 May Catch Up to Chrome for Speed

“Firefox 8, which only just appeared on the Nightly channel, is already 20% faster than Firefox 5 in almost every metric: start up, session restore, first paint, JavaScript execution, and even 2D canvas and 3D WebGL rendering. The memory footprint of Firefox Seven (and thus Eight) has also been drastically reduced, along with much-needed improvements to garbage collection.

According to our own benchmarks, start up, session restore, and first paint — how long it takes Firefox to appear after you click its icon, and how long it takes to re-open your previous tabs — have been continuously tackled since Firefox 7 first emerged, about two months ago. There’s a 10% difference between Firefox 5 and 7 — and a further 10% speed-up between FF7 and FF8. This isn’t merely an under-the-hood, synthetic-benchmark, on-paper thing either: the difference between FF5 and FF8 is very, very noticeable.

On the 2D canvas front, the huge 20% speed-up is due to the addition of a new graphics backend in Firefox 7 called Azure, which is a unified 2D graphics API that Firefox can use across every platform. At the moment, Cairo handles the interface between Firefox and the host OS’s 2D rendering libraries. Cairo’s performance on top of Direct2D (Windows 7/Vista) is excellent, but it’s not great on either XP or Mac OS X. Azure removes the Direct2D and Quartz (OS X) go-between and allows Firefox to write directly to the underlying 3D subsystems (Direct3D and OpenGL). At the moment, the performance gains are around 20% on Windows — but on OS X, the gains could be even higher. You can follow the Azure implementation on Bugzilla to keep up with the latest changes.”

Google May Yet Release “GDrive”

A cloud based file storage area? Sounds cool, innovative… well, it would have been if Google had rolled it out in 2006! But wait! They might yet!

Google May Be On The Verge Of Resurrecting “GDrive”

“In 2006, Google was internally testing a project codenamed ‘Platypus,’ an online storage service. When it was accidentally disclosed during an analyst meeting as ‘GDrive,’ it quickly captured the web’s imagination. Google seemed on the verge of transforming their servers into our own personal hard drives in the cloud. Plenty of startups were working on this (and still are), but the presumption was that Google would be able to scale this beyond anyone else and do it for free, or very cheap. Google refused to talk about it, but story after story after story kept coming.

It wasn’t until earlier this year that we found out what happened, thanks to Steven Levy’s book In The Plex. In 2008, GDrive was about to launch under Bradley Horowitz (now a lead on Google+), but Sundar Pichai (now the SVP of Chrome) convinced Google’s top executives not to launch it. The reason? He felt like the concept of a ‘file’ was outdated (sounds more than a bit Jobsian) in the cloud-based universe that Google was trying to build. After some debate, the powers that be at Google agreed and GDrive was shelved, and the team moved over to the Chrome team.

End of story, right? Not so fast.

Something curious appeared this evening in the Chromium Code Reviews issue list. As first noted by Nick Semenkovich on Twitter, there was a ticket to add the URL drive.google.com to a list in the browser’s code. This URL (which is not yet live) lead to a Hacker News thread wondering: ‘Google Drive coming soon?’

Diving a bit deeper into the code reviews, what’s most striking is that drive.google.com doesn’t appear to be referenced anywhere besides this one exposed ticket. This suggests that it’s either no big deal, or that Google is keeping this very secret.

I don’t think it’s the former because the messaging in the one ticket indicates that drive.google.com has been added to the HSTS (HTTP Strict Transport Security) list alongside other key Google apps like docs.google.com and spreadsheets.google.com. Another bit of code puts it alongside Android Market and Google Analytics.

Google information security engineer, Chris Evans, completed the ticket this evening. And Chrome engineer Adam Langley approved it with the message ‘LGTM’ (Looks Good To Me).

I reached out to Pichai (who again, is now a Google senior executive in charge of Chrome), but he declined to comment. A Google spokesperson would only say, ‘The team is always testing out new features, but we don’t have any details to share at this time.'”