Yes, I am always changing things up! Now, I have made the HTML5/WebM player the default for our videos on the web site. There will be another change occuring in the background VERY SOON that will dramatically speed up the playing speed of the WebM video as well… stay tuned! Actually, to be precise, the latest version of the Netcast (#224) is ALREADY the faster playing version!

So, stay tuned for enhancements, changes, and other goofing around!

New Nook Coming in the Spring

Barnes & Noble may be releasing a new Nook in the Spring, in an effort to fight off the inroads that Amazon has made in the e-book arena.

“On Sunday, the New York Times published a long piece about Barnes & Noble taking on Amazon in the ‘fight of its life.’ Buried in the middle of the two-page article is a small mention of engineers ‘putting the final touches on their [Barnes & Noble’s] fifth e-reading device, a product that executives said would be released sometime this spring.’

No details were offered beyond that, with a Barnes & Noble spokesperson declining to comment further. But the obvious question is what is it?

Another tablet, perhaps a larger model (think iPad size but with a $300-$350 price tag)? An even more affordable e-ink e-reader that might allow the company to break the sub-$50 barrier? Or perhaps something more exotic, such as an e-reader that features Qualcomm’s power-efficient Mirasol color display that has started to appear in e-readers in China and Korea? (Mirasol displays can also be viewed in direct sunlight).

The other thing worth considering is whether this new e-reader will be part of the Nook’s launch overseas. Barnes & Noble has long been rumored to be making this move and the Times article states that the first stop abroad is ‘expected to be Waterstones bookstores in Britain.’ No word on exactly when the Nook will arrive outside the U.S., but a launch doesn’t seem far off (‘before long’ is the time frame the Times reporter Julie Bosman suggested).

Also of note: Barnes & Noble will continue to tweak the design of its brick-and-mortar stores, according to CEO William Lynch. The company will be experimenting with smaller stores and eliminating the dedicated DVD and music sections while continuing to offer movies and music “elsewhere” in the stores.”

Today is the 2nd Birthday of the iPad! 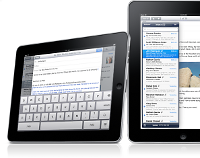 So, only two years since the advent of the iPad! Wow! As ubiquitous as tablets are, who would have thought it has only been a relatively short time?!

“Apple’s iPad turns two on Friday, assuming we accept the late Steve Jobs’ announcement of the iPad as the device’s date of birth rather than its April, 2010 release date.

The iPad’s gestation period was a long one. Computer pioneer Alan Kay had conceived of a tablet computer, the Dynabook, back in 1968, around the time that the film 2001: A Space Odyssey, based on Arthur C. Clark’s novel of the same name, depicted a tablet news reader.

Over the years, variations on the tablet theme appeared. Microsoft hardware partners shipped tablet PCs in 2002 and Windows-based tablets have lingered on, without much success.

Apple had a tablet of sorts in its Newton handheld device. The Newton had a ten-year run, starting in the late 1980s, but failed to achieve broad enough appeal to survive.

The iPad, however, is different. It’s hugely popular, so much so that Apple sold 15.4 million of them during the last quarter of 2011. That’s more than the number of PCs sold during that period by HP, the world’s leading PC vendor. The desktop computing era is officially over.”

Geek Software of the Week: WUInstall!

So, I needed a way to automate updates on my Citrix servers from a script, so I searched for a command line utility that would simpify all this. And, hooray! There is a tool that is freeware called WUInstall! It works with or without WSUS! Cool stuff!

There is also a Pro version with additional features. However, the Free version can be used commercially, or at home!

/search – lists all update which are available. It either searches on the Windows Update Server in the Internet, or, if configured, on your WSUS. It has no impact on your system at all, it just does a search and lists what was found.

/install – searches the updates, downloads them (if they have not already been downloaded by a previous wuInstall /download command) and then installs them.

/reboot [nseconds] possible in combination with other parameters, reboot is done after executing WuInstall with a delay of nseconds (default: 10) seconds

/criteria “query string” – searches for updates, which match the query string. For query strings see MSDN. The default criteria is “IsInstalled=0 and Type=’Software'”.

YouTubery! You know you love it! I post my video netcasts to the Ol’ YouTube! Well, YouTube is now getting 4 BILLION (with a “B”) views per DAY! Zowie!

It’s kind of amazing — and kind of frightening.

When it comes to how much video people are uploading to the site, the numbers are also mind-boggling: YouTube reports that 60 hours of video is uploaded to the site every minute, compared with 48 hours eight months ago.

What’s behind this growth of activity? Reuters points out that parent company Google is pushing the video-sharing service beyond the personal computer, with versions of the site now compatible with smartphones and televisions. The company also has been making an effort to get more professional-grade content on the site.

Does all of this translate to money? Well, some of it does. But, Reuters reports, Google said only about 3 billion videos a week are monetized.”

Yes, I am trumpeting some new features on my own web site. My Dad always said, “He that tooteth not his own horn, his horn remaineth untooted!” (And, yes, he was as odd as I am!) Anyway, here’s a rundown of new stuff on the ol’ web site!

1) We now have an HTML5/WebM video in the upper right column corner with the latest (that is, last produced) netcast!

2) We have added the “Sociable Plug-in” to allow you to easily share our posts to the Interwebs! (Share and Enjoy!)

3) Under the aforementioned HTML5/WebM screen, we now have shortcuts to the URLs for subscribing the the show, so you never miss an episode!

4) For our European friends, we added Sevenload to the list of social video sharing sites the show is posted to.

5) Click on, and sign up for, “Dr. Bill’s Newsletter” in the sidebar to get our weekly newsletter! (OK, that one is not new, but you should still sign up!)