Here’s a neat tip I discovered from using Fedora as my client. When you get a “hung” application window, and want to have a graphical way to “kill” the process without any tedious mucking around at the command line, try this:

Hover over the “Disabled” at the end of the bar on the right side panel of your new shortcut, click it, then do a keyboard combination… I used “Control-F12” … you can then exit out. When you have a session hung, you can hit “Control-F12” and your cursor will change to an “X” … whereever you click the “X” (whatever window) will be “killed.” Enjoy!

Start the Video Netcast in the Blubrry Video Player above by
clicking on the “Play” Button in the center of the screen.
(Click on the buttons below to Stream the Netcast in your “format of choice”)
(Right-Click on any link above, and select “Save As…” to save the Netcast on your PC.)
Available on YouTube at: https://youtu.be/NLqQOzNodys
Available on Vimeo at: https://vimeo.com/37450854

Start the Video Netcast in the Blubrry Video Player above by
clicking on the “Play” Button in the center of the screen.
(Click on the buttons below to Stream the Netcast in your “format of choice”)
(Right-Click on any link above, and select “Save As…” to save the Netcast on your PC.)
Available on YouTube at: https://youtu.be/NLqQOzNodys
Available on Vimeo at: https://vimeo.com/37450854

LibreOffice 3.5 is Out! Time to Upgrade! 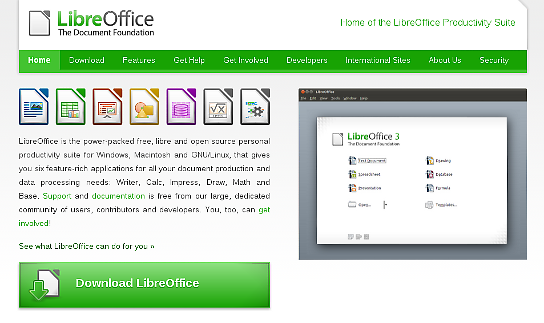 “LibreOffice is the power-packed free, libre and open source personal productivity suite for Windows, Macintosh and GNU/Linux, that gives you six feature-rich applications for all your document production and data processing needs: Writer, Calc, Impress, Draw, Math and Base. Support and documentation is free from our large, dedicated community of users, contributors and developers. You, too, can get involved!”

Cloudberry Explorer, the freeware version for Windows XP and Windows 7 is awesome… however, the Pro version (which costs money, well, $39.99) is even MORE awesome! It allows something that I REALLY want, the ability to transfer via FTP from an existing (external) host to your S3 account WITHOUT bringing it down to your local PC first. Very, very cool stuff! Highly Cloud geeky!

“CloudBerry Explorer makes managing files in Amazon S3 storage EASY. By providing a user interface to Amazon S3 accounts, files, and buckets, CloudBerry lets you manage your files on cloud just as you would on your own local computer.”

My very favorite video/audio player in the universe is VLC! And, version 2.0 is out… a big milestone! Download and install NOW!

“VLC 2.0 ‘Twoflower’ is a major new version of our popular media player.

With faster decoding on multi-core, GPU, and mobile hardware and the ability to open more formats, notably professional, HD and 10bits codecs, 2.0 is a major upgrade for VLC.
Twoflower has a new rendering pipeline for video, with higher quality subtitles, and new video filters to enhance your videos.

It supports many new devices and BluRay Discs (experimental).

Completely reworked Mac and Web interfaces and improvements in the other interfaces make VLC easier than ever to use.

Twoflower fixes several hundreds of bugs, in more than 7000 commits from 160 volunteers.”

INPUT AND DEVICES
Experimental support for BluRay discs:
– Menus are deactivated in this release (will come soon).
– AACS and BD+ DRM libraries and keys are not shipped, for legal reasons.
Support for SDI capture cards and QTKit devices.
Support for new adaptive streaming protocols, like HLS and DASH.

FOR PROFESSIONAL USERS
Support for ProRes 422 and 4444, AVC/Intra.
Support for Jpeg-2000, Dirac and DNxHD/VC-3 in 10bits.
Support for EBU subtitles (stl) and EIA-608.
SDI and HD-SDI card support for input on Linux.
New Dirac/VC-2 encoder, faster than the previous one.

FOR DEVELOPERS
libVLC, libVLCcore and libcompat have switched from GPL to LGPLv2.1+.
New libVLC examples are available: media player, photobooth and mediainfo clones.
New JSON requests on the web interface to control running VLC instances.
Implementation of the MPRIS2 interface to control media players.
VLC’s web plugins have been rewritten for better integration and stability in all browsers.”

You know I am a HUGE fan of Linux! Ever since 1992, I have been fascinated with it! (When it was introduced!) So, it is exciting to see our little OS all grown up, and commanding new, better jobs for Linux gurus!

“Linux know-how is topping the list of most highly sought expertise in software programming positions, according to Dice.

A report from IT jobs specialist Dice that forecasts the Linux job market shows demand for Linux skills is on the rise but that finding talent is difficult. The report noted that this is triggering better salaries and bonuses for Linux professionals, as companies look to open-source IT specialists to solve their business challenges and provide growth opportunities.

Eighty-one percent of survey respondents say that hiring Linux talent is a priority in 2012. This urgency is driving a substantial increase in recruiting activity, with 47 percent of hiring managers expecting to add more Linux professionals to their firms in early 2012 and 63 percent noting Linux hires are increasing relative to jobs created in other skill areas.

However, a full 85 percent report having difficulty finding qualified Linux professionals to fill these positions, pointing to the need for more skilled Linux talent. The “2012 Linux Jobs Report” includes the results of a recent survey of more than 2,000 hiring managers. Dice and The Linux Foundation, the nonprofit organization dedicated to supporting the growth of Linux, conducted the survey.

In an economy where contract and temp-to-hire positions have become more prevalent, Linux professionals garner more full-time positions and better salaries, bonuses and perks. While the average pay increase for tech professionals averaged just 2 percent in 2011, professionals with Linux skills have seen a 5 percent increase in salaries and a 15 percent jump in bonus payouts over the same timeframe. Seventy-five percent of respondents cited the mid-level professional with three to five years of experience as their most-sought hires, especially those with development or systems administration skills.

‘Linux jobs have become some of the hottest jobs in all of tech,’ said Jim Zemlin, executive director at The Linux Foundation. ‘Clearly, hiring managers throughout the IT tech sector understand this and are aggressively seeking Linux professionals. It is our job to meet this demand by ensuring developers and systems admins have access to the community networking opportunities and Linux training they need to take advantage of this unprecedented opportunity.'”

Ubuntu for Android Demo’ed by Canonical

Ubuntu for Android. I mentioned it before, and now, it is here!

“Canonical is making good on its promise to bring its popular Ubuntu flavor of Linux to a broader range of devices by announcing Ubuntu for Android, a release that will enable a full desktop computing experience on a docked Android smartphone. More than just a virtualized app that behaves like Ubuntu, the developers have melded together the Ubuntu architecture with the Android 2.3 (Gingerbread) AOSP build at the kernel level. The result is, from what we’ve seen, a harmony between the two platforms that could make a lot of sense for demanding mobile users.

To begin the introduction to Ubuntu for Android, let’s start with what Ubuntu for Android isn’t: it’s not a new mobile OS. Rather than try to enter the arena to take on Apple, Microsoft, and Google, Canonical instead chose to build a package that leverages the popularity of Android. This means Canonical is building on top of the world’s fastest growing mobile platform as a value-add. It’s a move that allows Ubuntu to augment the Android experience as opposed to attempt to replace it. This new release is best understood as a convergence between your mobile and desktop computing environments.

In an interview with Canonical CEO Jane Silber, I was able to grasp the driving idea behind Ubuntu for Android in the scheme of Canonical’s overarching vision for Ubuntu. Right now, you most likely carry a smartphone, laptop, and perhaps a tablet device of some kind. Each has a specific purpose in your day, but adds an amount of weight and time to your mobile computing. With the release of this software distribution, Canonical has unveiled that its goal is to narrow down the amount of devices that you carry to just one that will provide the same functionality of all three items mentioned above.”

After Six Years, a New Version of Apache Web Server!

Our old buddy, Steven J. Vaughan-Nichols, at ZDnet has a great article on the announcement about Apache’s new version.

“The Apache Software Foundation has just announced the release version 2.4 of its award-winning Apache HTTP Server. This is the first major release of the Apache Web server in more than six years. Long before the release of Apache 2.2 in December 1st, 2005 though, Apache was already the most popular Web server in the world. Today Apache powers almost 400 million Web sites.

‘It is with great pleasure that we announce the availability of Apache HTTP Server 2.4′, said Eric Covener, Vice President of the Apache HTTP Server Project in a statement. “This release delivers a host of evolutionary enhancements throughout the server that our users, administrators, and developers will welcome. We’ve added many new modules in this release, as well as broadened the capability and flexibility of existing features.’

It’s that first point, improved performance, that most users have been waiting for. While Apache has remained very popular, many users have wanted a faster Web server.

This update has been long expected, but it couldn’t come at a better time for Apache. In recent months NGINX, a low-latency, high-performance Web server, has flown by Microsoft’s Internet Information Server (IIS) to become the world’s number two Web server. While it seems unlikely that NGINX could overcome Apache’s commanding lead, NGINX has recently started to offer commercial support and is growing in popularity compared to both Apache and IIS in recent months.”

SkyDrive Will Be In Windows 8!

Apple is integrating iCloud, their Cloud Computing platform, into OS/X “Mountain Lion”… and now, Microsoft is announcing that they will incorporate their SkyDrive into Windows 8!

“SkyDrive, Microsoft’s cloud storage product, will be get a Metro-style app with Windows 8, the company announced today.

SkyDrive will also get a desktop app for Internet Explorer and the ability to fetch remote files from the Web, the software giant revealed on its Building Window 8 blog.

Microsoft intends for SkyDrive to ‘evolve with Windows 8 from a website today into a true device cloud for Windows customers,’ Mike Torres and Omar Shahine, group program managers for SkyDrive, wrote in the post. ‘With Windows 8, we wanted to make sure that your files would be instantly available and up-to-date as you move between PCs–without configuring add-ons or using a USB drive.’

‘This will bring a file cloud to every Metro style app, allowing you to open files in your SkyDrive and save them right back to your SkyDrive just like you would on your local hard drive,’ the pair writes.

The desktop app will allow ‘easy drag-and-drop upload and download support for SkyDrive, anywhere access to your data, offline access, and the power of Windows Explorer to manage your files and folders.’”