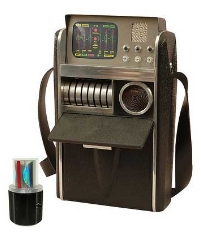 So many Star Trek devices are becoming “real”… why not Dr. McCoy’s Tricorder?

The Race To Build A Star Trek-Worthy Medical Tricorder

“In the future, you’ll be able to figure out what’s wrong with you (or your child) simply by scanning them with your cell phone. In the present, two companies are racing to make the first prototype.

The medical tricorder, a handheld device in the Star Trek universe used to diagnose diseases and keep track of vital signs, once seemed a sci-fi impossibility alongside teleportation and alien encounters. Not anymore. The $10 million Qualcomm Tricorder X Prize, officially announced this week, challenges entrants to create mobile platform that can accurately diagnose 15 diseases across 30 patients in three days. We caught up with two startups–Senstore and Scanadu–that think they can pull it off.

Scanadu has been working on a non-invasive, non-contact, non-sampling (no saliva, urine, stool sample necessary) tricorder since before the X Prize challenge was announced. The startup, which raised $2 million in November, was only founded last January. But co-founder Walter De Brouwer set up a research lab in Belgium–Starlab–in the late 1990s, where he prototyped a tricorder-like device. It was too far ahead of its time. ‘It was the size of a backpack. It was an interesting idea but not really workable,’ explains Scanadu co-founder and COO Misha Chellam.

That brings us to Senstore, another startup that’s working on a medical tricorder–but one that will be open source. Senstore got its start at Singularity University’s 2011 summer graduate program, where the current Senstore team took on the challenge of using sensor technology to solve global health problems.”