Start the Video Netcast in the Blubrry Video Player above by
clicking on the “Play” Button in the center of the screen.
(Click on the buttons below to Stream the Netcast in your “format of choice”)
(Right-Click on any link above, and select “Save As…” to save the Netcast on your PC.)
Available on YouTube at: https://youtu.be/mW30mjE_XMM
Available on Vimeo at: https://vimeo.com/39552568

Start the Video Netcast in the Blubrry Video Player above by
clicking on the “Play” Button in the center of the screen.
(Click on the buttons below to Stream the Netcast in your “format of choice”)
(Right-Click on any link above, and select “Save As…” to save the Netcast on your PC.)
Available on YouTube at: https://youtu.be/mW30mjE_XMM
Available on Vimeo at: https://vimeo.com/39552568

You can have fun and learn about physics! Reminds me of a bumper sticker I saw at NC State in the 70s: “Physics R Fun!”

“The Angry Birds franchise owes a lot to Isaac Newton. The legendary 17th-century scientist defined the classical laws of gravity, after all, and without them, the game’s designers would have had nothing to go on in crafting how things move in its virtual world.

Consequently, the game’s heroic-yet-furious birds wouldn’t be able to exact their high-impact revenge on those smug, green pigs. Without the laws of gravity to guide them, the pigs’ Rube Goldberg-esque structures simply wouldn’t come crashing down.

The thing is, the game doesn’t use real physics to model how things move. That’s according to Rhett Allain, an associate professor of physics at Southeastern Louisiana University. The latest version, Angry Birds Space, which escalates the avian-porcine conflict to the final frontier, uses science that’s even further from reality, he says.

Allain says he took on figuring out the game’s physics because it was a challenge. Without ever contacting the game publisher, Rovio, he wrote an extensive analysis of the physics of Angry Birds Space for Wired. The question remains: Why spend so much time analyzing a silly game?

‘My goal is to use this as an educational tool,’ Allain told Mashable. ‘I love doing analysis for Angry Birds because it’s a lot like real physics but it doesn’t have the same answers. Obviously in this case the gravitational force is not the same as what you could look up in a textbook. I want to to try to find the answer, just like we do in science.'”

Yes, it is available in the right hand column of the current web page… RIGHT NOW, Roku has a deal through this link, that will snag you a Brand New Roku box for $49.99 with FREE SHIPPING! Dewd! I ordered another one myself! (I ordered it for my bedroom!) Very cool!

Geek Project: Save A Friend’s Computer!

So, you would NEVER get a massive virus, or trojan, infection, but your clueless friend would! So, be the hero! Clean their PC once it has been eaten!

Here are the things that you need:

You will probably want to boot into Safe Mode before installing and running these tools, but by doing all these, chances are very good that you WILL save the day… unless you have a trojan that has written a “re-infecter” into the boot record of your hard drive in a hidden partition, then… sigh. Just go ahead and do a deep hard drive wipe and re-format, and re-install, Windows.

Of course, ALL this assumes Windows, because if they were running Linux… well, you wouldn’t HAVE to rescue them!

If you DO need to do a complete drive format and wipe, use Active KillDisk, available here:
https://www.killdisk.com/

Yes, don’t be an April Fool! Back up your data!

“As we live an increasingly digital life, we can’t afford to ignore the enormous amount of data that we create. We’re well on track to make well over 1.8 zettabytes of data this year. That’s almost 57 billion iPads or 210 billion movies worth! Think about all the precious baby videos, financial documents, love letters, business emails and wedding photos that you’d lose if it isn’t backed up.

When a hard drive fails and the data isn’t backed up, it’s gone. And it’s not a question of if your drive will fail, it’s when. Remember, every single computer component will fail eventually.

The hard drive is the component in your computer that has the highest chance of breaking unexpectedly. A hard drive consists of a head unit hovering over a special disc that spins 7,500 times a minute! One little bump and that head could crash into the spinning disk. And the crash itself isn’t what causes the most damage. It’s the loss of the data on that drive. If any other computer component fails, usually a new part can be switched out and the computer will be exactly the same as before. On the other hand when your hard drive crashes, you won’t be able to get your data back (unless you have an massive amount of money to spend on data recovery).

Backing up is really simple once you’ve set up the backup process. There are a number of different methods depending on how you want to back up, and how safe you want to keep it. You can even set up multiple backups to better protect your files. It’s just a matter of taking the first step of recognizing the value of your data. A backup isn’t just an external hard drive, it’s a plan to automatically create multiple copies of your data.

A final point – once a year is NOT frequent enough for backing up data. World Backup Day was created to spread awareness and to get those who have never backed up to understand how important it is to keep your data safe. Once you learn how easy it is, you’ll be able to backup your life automatically!”

Geek Software of the Week: FreeUndelete! 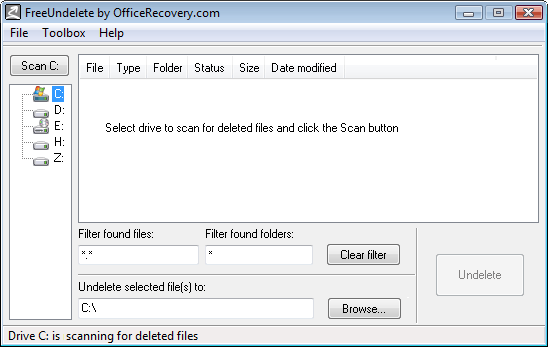 Do you need to undelete files that you accidentily deleted? Well, here you go!

“FreeUndelete restores deleted files, including those removed from Windows Recycle Bin. In case of accidental removal of files on a NTFS (1.0 and 2.0) (default for Windows Vista, XP, 2000 and NT), FAT32, FAT16 or FAT12 file systems this is the utility to help.

The recovered files are saved into a new user-selected location to prevent overwriting the deleted files on the original media.”

Google Chrome 18 is Out!

And it has some cool new features!

“Version 18 of the Chrome Web browser has rolled out to the stable channel. The new version includes hardware-accelerated rendering for the HTML5 Canvas element on Windows and Mac OS X.

As we have recently reported, standards-based Web technologies provide an increasingly capable platform for game development. The major browser vendors are working to further increase the viability of open standards for browser-based gaming. Offloading Canvas rendering to the GPU helps reduce the CPU load of 2D games and improves performance. The feature has been available in Chrome for quite some time, but it’s now finally enabled by default.

Hardware-accelerated Canvas rendering is only available on systems with compatible graphics hardware. You can get some information about what features in Chrome have hardware acceleration enabled on your system by navigating to the ‘chrome://gpu’ URL.

Another key open standard that is relevant for gaming is WebGL, which provides JavaScript APIs for rendering 3D content in the Canvas element. In Chrome 18, Google has introduced a software-based backend for WebGL based on TransGaming’s SwiftShader. This will make it possible for users to view WebGL content on computers that don’t have compatible graphics hardware. Although it will open up WebGL content to more users, the software-based renderer doesn’t offer comparable performance to native hardware-accelerated WebGL.

In addition to these improvements, the Chrome developers have also been working to make various security improvements based on vulnerabilities that were exposed during the Pwnium competition. For more details about the Chrome 18 release, you can refer to the official release announcement. The software is available for download from Google’s website.”

Start the Video Netcast in the Blubrry Video Player above by
clicking on the “Play” Button in the center of the screen.
(Click on the buttons below to Stream the Netcast in your “format of choice”)
(Right-Click on any link above, and select “Save As…” to save the Netcast on your PC.)
Available on YouTube at: https://youtu.be/_297NZKAi6Q
Available on Vimeo at: https://vimeo.com/39171617

Start the Video Netcast in the Blubrry Video Player above by
clicking on the “Play” Button in the center of the screen.
(Click on the buttons below to Stream the Netcast in your “format of choice”)
(Right-Click on any link above, and select “Save As…” to save the Netcast on your PC.)
Available on YouTube at: https://youtu.be/_297NZKAi6Q
Available on Vimeo at: https://vimeo.com/39171617
1 2 3 … 5 »