Geek Software of the Week: BlueGriffon! 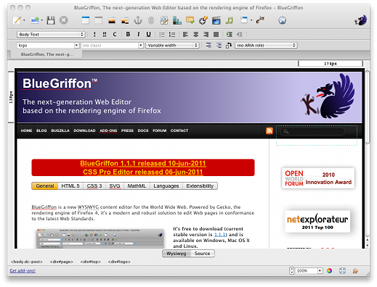 There was an Open Source Web Editor that was WYSIWYG and was pretty nice! It was called Nvu. But, it is now dead. However, the same developer’s have created an even BETTER version called BlueGriffon! It is available for Windows, Linux, and Mac OSX. Check it out!

“BlueGriffon is a new WYSIWYG content editor for the World Wide Web. Powered by Gecko, the rendering engine of Firefox, it’s a modern and robust solution to edit Web pages in conformance to the latest Web Standards.

t’s free to download (current stable version is 1.5.2) and is available on Windows, Mac OS X and Linux.

Because Gecko lives inside BlueGriffon, the document you edit will look exactly the same in Firefox. Advanced users can always use the Source View to hard-code their page.