Cross-Posted from the Hand Held Hack: Wow! How cool is this? Hold this device up to view a person using sign language, and get a vocalized version of the “translation!”

“ScienceDaily (June 1, 2012) — Too often, communication barriers exist between those who can hear and those who cannot. Sign language has helped bridge such gaps, but many people are still not fluent in its motions and hand shapes.

Thanks to a group of University of Houston students, the hearing impaired may soon have an easier time communicating with those who do not understand sign language. During the past semester, students in UH’s engineering technology and industrial design programs teamed up to develop the concept and prototype for MyVoice, a device that reads sign language and translates its motions into audible words. Recently, MyVoice earned first place among student projects at the American Society of Engineering Education (ASEE) — Gulf Southwest Annual Conference.

MyVoice’s concept focuses on a handheld tool with a built-in microphone, speaker, soundboard, video camera and monitor. It would be placed on a hard surface where it reads a user’s sign language movements. Once MyVoice processes the motions, it then translates sign language into space through an electronic voice. Likewise, it would capture a person’s voice and can translate words into sign language, which is projected on its monitor.”

Do you carry around portable apps (say, from PortableApps.com) on a USB stick? How about a cool menu to quickly select the app from your USB stick?

“Portable Start Menu is a simple and free start menu application that can be installed on USB sticks or local PCs.

Organize your programs in a simple menu system and launch them via a tray icon. If you close Portable Start Menu on an USB-Stick, running applications can be closed automatically, too. 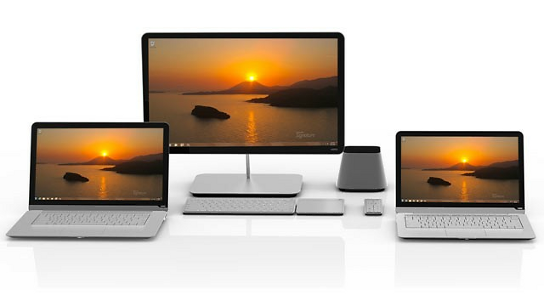 “It takes a lot to make us genuinely excited about a laptop, or even worse, another desktop PC. But cheap TV king Vizio’s done just that. We loved them at CES, and now the all-in-one and superskinny laptop line’s official.

The 24 and 27 inch all-in-one PCs, which borrow enough of Apple’s picture frame design without looking like just another imitator. In fact, it looks pretty stellar, the result of two years of design. The gleaming aluminum neck, the entirety of the guts packed into the tiny base, the Magic Trackpad knockoff—the thing’s form is terrific.

And for a highly reasonable $900 and $1100, respectively, you’ll get a damn good thin rig: Ivy Bridge CPUs, Nvidia’s latest Kepler graphics, USB 3.0, 1920 x 1080 displays, and a maximum terabyte hard drive plus a 32 GB SSD. On the software side, you’ll appreciate an installation of Windows 7 with zero bloatware—no awful photo editors and video players you’d drink blood over actually using. You’ll get none of that here—nothing installed at all—which is an enormous relief.

The entire thing doubles as a 1080p TV, with two HDMI inputs—hey now, nice for a dorm or bedroom!”

Skype for Linux is No Longer Beta!

Official version 4.0 of Skype for Linux is available NOW!

From the Skype for Linux Blog:

“First off, we’d like to thank our Skype for Linux users for your patience awaiting Skype 4.0 for Linux, codenamed ‘Four Rooms for Improvement,’ which is now available. With this release, we have finally filled the gap with our other desktop clients and we are now making many of the latest Skype features, as well as a lot of UI improvements, available to our penguin lovers.

You will find four major changes in this release:

Of course, we have loads of other small improvements and fixes. As you can imagine, the list is so long it would take too much time to write it all, but some are worthy of mention:

Note, the very first time you start Skype for Linux 4.0 might take a few minutes (depending on how lengthy your chat history is). Please do not close Skype during this time. Subsequent starts will load much more quickly.”

Yammer will get a reported 1.2 Billion dollars in it’s sale to M$. Insiders suspect Microsoft is trying to shore up its Office product to update it to use social components. Yammer is sort of a “Facebook for Business.” I have an account there and watch discussions between fellow virtualization geeks. In the last nine months, Microsoft revenue from their Office product division is 17.7 Billion.

According to the web site “The Wrap,” Microsoft has a surprise in store for Apple! A tablet to rival the iPad. Can they pull it off?

“Microsoft is set to unveil a tablet next week that will mark its entry into rival Apple’s territory with its own branded product, TheWrap has learned.

The company has scheduled a secretive event for Monday at 3:30 p.m. June 18 in Los Angeles, where it will make a ‘major’ announcement whose nature has not been disclosed. Even the venue has not yet been announced.

But an individual with knowledge of the company said that Microsoft would introduce a Microsoft-manufactured tablet at the event, marking a foray into a new hardware category that would put the company in direct competition with giant rival Apple.”

Start the Video Netcast in the Blubrry Video Player above by
clicking on the “Play” Button in the center of the screen.
(Click on the buttons below to Stream the Netcast in your “format of choice”)
(Right-Click on any link above, and select “Save As…” to save the Netcast on your PC.)
Available on YouTube at: https://youtu.be/Zmrtk9Fu520
Available on Vimeo at: https://vimeo.com/43742070

Start the Video Netcast in the Blubrry Video Player above by
clicking on the “Play” Button in the center of the screen.
(Click on the buttons below to Stream the Netcast in your “format of choice”)
(Right-Click on any link above, and select “Save As…” to save the Netcast on your PC.)
Available on YouTube at: https://youtu.be/Zmrtk9Fu520
Available on Vimeo at: https://vimeo.com/43742070

Indeed! I love my notebook running Ubuntu 12.04 LTS… I use it as my primary system!

Microsoft Wimps Out on IE10 “Do Not Track” Setting

As I predicted in the last netcast, M$ backed off. I knew they would. It was a “trial balloon” to see what the industry would say.

The latest proposed draft of the Do Not Track specification published Wednesday requires that users must choose to turn on the anti-behavioral tracking feature in their browsers and software.

That means that Microsoft IE 10, which the company announced last week will have Do Not Track turned on by default, won’t be compliant with the official spec. Which means that tech and ad companies who say they comply with Do Not Track could simply ignore the flag set by IE 10 and track those who use that browser. Which means Microsoft has no choice but to change the setting.

Microsoft’s surprise announcement last Thursday was interpreted by many as a way to gouge Google, which runs an ad system based on tracking cookies. But it also enraged many online ad companies and industry groups, who saw the move as overly aggressive and a threat to their business model.”