Geek Software of the Week: LibreCAD! 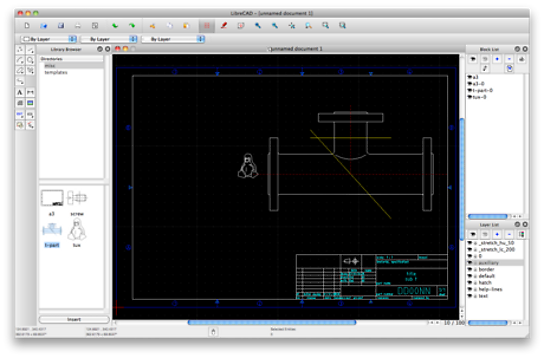 Yes! Free CAD (Computer Aided Design). Now you can create the next great cool design for a house, or anything, all for FREE!

LibreCAD is a fully comprehensive 2D CAD application that you can download and install for free. There is a large base of satisfied LibreCAD users worldwide, and it is available in more than 20 languages and for all major operating systems, including Microsoft Windows, Mac OS X and Linux (Debian, Ubuntu, Fedora, Mandriva, Suse …).

You can download, install and distribute LibreCAD freely, with no fear of copyright infringement.

LibreCAD is a feature-packed and mature 2D-CAD application with some really great advantages:

The Surface Pro is On The Way!

It is only weeks away at this point. Will it be the :next big thing” that Microsoft hopes it will be? Or, is it just too expensive?

“Microsoft’s Windows 8 Pro version of the Surface will arrive soon, giving consumers probably one the highest performing tablets to date.

Microsoft is already dropping not-so-subtle hints that the device is coming ‘early in 2013.’ And now it appears to have made its debut at the FCC.

Let’s look at what else Microsoft is saying about the 2-pound tablet that sets it apart from the current Surface RT tablet.

And we may already be getting a sneak preview of the Surface Pro courtesy of CNET’s review of the Acer Iconia W700 tablet.

Here’s what CNET said: ‘In our benchmark tests, the Iconia W700 performed similarly to other Core i5-3317U Windows 8 laptops and convertibles, or a little behind. It’s well-suited for everyday use, from HD video streaming to social media, to working on office tasks.'”

Kim DotCom has launched a new upload service with 50 gig of cloud storage FREE! Will it get taken down like the original?

Kim DotCom plans to launch his new site in two days, and users will get 50GB of storage for free, the infamous entrepreneur tweeted today.

DotCom also tweeted that his lawyers are working on giving former premium users their premium statuses on the new site but that the site ‘can’t at this time.’

50GB is a huge amount of free storage right off the bat. DotCom’s tweet comes a day after another cloud storage service, MediaFire, announced it would be offering 50GB of free storage. Other storage services may offer as much — or more — for free, but those accounts come with requirements.

DotCom’s tweets also indicate that more goodies are coming with the new service. After the year he’s had, he’ll need those incentives to get going again.

DotCom has spent the last year battling the U.S. government over his site MegaUpload, the highest-profile service to be accused of criminal copyright violations. He was arrested on allegations of criminal copyright violation, conspiracy, money laundering, and wire fraud. U.S. federal officials accused DotCom of pocketing millions of dollars in illegal profits from criminal file-sharing and downloading that has reportedly cost the film industry more than $600 million in damages.

While still fighting the government in court, DotCom decided to start a new site from New Zealand, where he now resides. He claimed that he was entrapped by the U.S. government because he complied with a federal search warrant targeting five file-sharing services using MegaUpload’s infrastructure in 2010, but the feds have called this claim ‘baseless.'”

Lenovo Gets Into Chromebooks

The Chromebook, it seems, is really beginning to catch on! But isn’t it “just a web browser?” Well, if you can do all that you need to do over the Web, why not? I have heard that sales on Amazon of Chromebooks is out-pacing regular laptops! It fact, on Amazon, more Linux-based Chromebooks are selling than Windows-based laptops. Think of THAT! Coolness!

Lenovo shows its own Chromebook

“Lenovo has decided that it is just about the right time to join the Chromebook race with the likes of Samsung and Acer and it did do by announcing its own version, based on the familiar Thinkpad X131 design.

The Thinkpad X131e Chromebook, as Lenovo decided to call it, features pretty much all the same specs as the X131 so you are looking at 11.6-inch 1366×768 anti-glare screen, a yet to be specified Intel CPU, three USB ports, probably 2GB of RAM and a minimum amount of storage, most likely enough for the Chrome OS while the rest will be cloud-based. It also comes with WiFi connectivity as well as VGA and HDMI outputs.

The new Thinkpad X131e Chromebook also comes with a recognizable Thinkpad keyboard and touchpad as well as the Thinkpad “rugged features” since it is mainly aimed at schools. It simplifies software and security management for school administrators and provides students and teachers with quick access to thousands of apps, education resources and storage, according to Lenovo.

The battery life is rated at “an entire school day” and at less than four pounds it is surely portable.

The new ThinkPad X131e Chromebook will be available as of February 26th via special bid since it is aimed solely at schools and school programs so we guess that we will not see in retail/e-tail anytime soon.”

Over 1 Million Sold… and We Aren’t Talking Hamburgers!

One Million Raspberry Pi Boards Have Been Sold Since Launch

“With all the hoopla around CES, we sadly missed this amazing milestone for one of the greatest little projects I’ve seen in a long time, Raspberry Pi. An estimated one million of these tiny computers have been sold so far, an amazing feat for a tiny $35 circuit board that can boot directly into a streamlined version of Linux.

The folks at element 14/Premier Farnell announced today that they alone have now made and sold more than half a million Raspberry Pis. They’re only one of two official distributors; we don’t have completely up-to-date figures from RS Components yet, but Farnell’s news suggests that we’re well on the way to having sold our millionth Raspberry Pi.
To celebrate the company released this cute info graphic, informing us that, if stacked end to end, a million Pis would be higher than 111 Empire State Buildings.

We detailed the unique manufacturing challenges associate with the Pi with 4,000 Raspberry Pis leaving a U.K. factory every day – or one every 7.5 seconds.

Raspberry Pis have ended up as the brains for a mini arcade cabinet and a DIY GSM base station. It also runs RISC OS and, more important, is a great way for kids to learn how to use computers without spending a fortune on hardware.”

Raspberry Pi a HUGE Success, But No New Model This Year 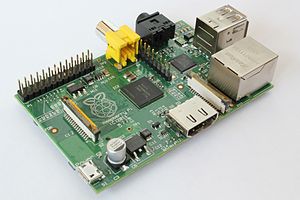 I told you about the shear awesomeness of the Raspberry Pi! Turns out the creator was not fully prepared for how successful it was! Now, I have one on order. I’ll report further on it when it is delivered!

“Raspberry Pi’s $35 Linux-based computer is a runaway success. Creator Eben Upton told ZDNet in a recent interview that his team thought they would sell 1,000 units when they were designing the mini PC, but sales have now topped 700,000. ‘We honestly did think we would sell about 1,000, maybe 10,000 in our wildest dreams,’ Upton said. ‘We thought we would make a small number and give them out to people who might want to come and read computer science at Cambridge.’ On a slightly disappointing note to those hoping for an upgraded model in 2013, Upton said in the interview that the company has no plans to launch a sequel to the latest Raspberry Pi ‘Model B’ this year.”

Where to see TPN CES coverage. Windows 8 app is out for DropBox, and it is meh. A ONE TB Thumbdrive! A hint: dry out your thumbdrive! GSotW: Eraser – securely erase files in Windows, and FreedomPop – Free 4G wireless Internet! Cool! Plus, Geek Wisdom!

Start the Video Netcast in the Blubrry Video Player above by
clicking on the “Play” Button in the center of the screen.
(Click on the buttons below to Stream the Netcast in your “format of choice”)
(Right-Click on any link above, and select “Save As…” to save the Netcast on your PC.)
Available on YouTube at: https://youtu.be/mQNlIEpg0yI
Available on Vimeo at: https://vimeo.com/57291122

Where to see TPN CES coverage. Windows 8 app is out for DropBox, and it is meh. A ONE TB Thumbdrive! A hint: dry out your thumbdrive! GSotW: Eraser – securely erase files in Windows, and FreedomPop – Free 4G wireless Internet! Cool! Plus, Geek Wisdom!

Start the Video Netcast in the Blubrry Video Player above by
clicking on the “Play” Button in the center of the screen.
(Click on the buttons below to Stream the Netcast in your “format of choice”)
(Right-Click on any link above, and select “Save As…” to save the Netcast on your PC.)
Available on YouTube at: https://youtu.be/mQNlIEpg0yI
Available on Vimeo at: https://vimeo.com/57291122

Too good to be true? Well, it IS only 500 meg per month for free, but still, free wireless Internet at 4G speeds is VERY cool!

You have a choice of three devices to choose from, from a pocketable up to 8 device hotspot, to a USB dongle for your laptop! Not to mention a device that turns an iPod Rouch into a 4G iPhone-like hybrid! Pretty amazing!

Geek Software of the Week: Eraser!

So, you need to be SURE that files are COMPLETELY gone! Super secret files that NO ONE should ever see! The formula to Coca-Cola! Sure as that… now you can be sure!

Most people have some data that they would rather not share with others – passwords, personal information, classified documents from work, financial records, self-written poems, the list continues.
Perhaps you have saved some of this information on your computer where it is conveniently at your reach, but when the time comes to remove the data from your hard disk, things get a bit more complicated and maintaining your privacy is not as simple as it may have seemed at first.

Your first thought may be that when you ‘delete’ the file, the data is gone. Not quite, when you delete a file, the operating system does not really remove the file from the disk; it only removes the reference of the file from the file system table. The file remains on the disk until another file is created over it, and even after that, it might be possible to recover data by studying the magnetic fields on the disk platter surface.

Before the file is overwritten, anyone can easily retrieve it with a disk maintenance or an undelete utility.

There are several problems in secure file removal, mostly caused by the use of write cache, construction of the hard disk and the use of data encoding. These problems have been taken into consideration when Eraser was designed, and because of this intuitive design and a simple user interface, you can safely and easily erase private data from your hard drive.”