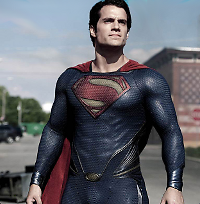 So, I plan to see Superman, or technically, “The Man of Steel” later today. So consider this a pre-review of the movie. Now, you might ask, “Dr. Bill, why would you review a movie before you see it?” The answer is, of course, because I’m ticked off at all the critics that are reviewing this movie! Why you ask? Because most critics are idiots. Here’s why I think so:..

A lot of the reviews that I’ve read are saying that the new Superman movie isn’t as good as past movies because it doesn’t have Clark Kent being an idiot, or as I’ve heard some say, “a likable buffoon.” First of all, Clark Kent was never “a likable buffoon,” he was portrayed that way in past movies and TV shows, when in fact he wasn’t. In fact, one of the best portrayals that I’ve seen of Clark Kent was in the TV series “Lois and Clark – the New Adventures of Superman.” There, Clark was an ordinary guy except that he was smart, he was resourceful, he was caring, and you found yourself believing that he and Lois could have a reasonable relationship. Now, obviously this series “jumped the shark” later in the series’ run when Lois started eating frogs. But I digress. The point is that Clark was portrayed as a reporter for the Daily Planet that had ability in and of himself, but was actually humble about it.

Now, obviously, if you ever saw Superman standing beside of Clark Kent you could easily tell they were the same person… but we have to make a bit of a leap to believe that Clark Kent could be a secret identity, emphasis on “secret,” for Superman. That said, as I understand it, the new movie in theaters now (which as I said, I plan to see later today;) I have heard, is very serious in its approach to the story of Superman. Critics that want to see a silly, campy, over the top, Superman are disappointed. To which I say, “Awesome!” I don’t want to see a silly, campy Superman. I want to see a Superman that is an alien from the planet Krypton trying to come to terms with his super abilities here on earth. Which, as I understand it, is what this movie is about! So phooey on you, critics. You are obviously crazy. Now go watch old 1960s Batman episodes and leave us alone!