And, speaking of old style analog, film-based cameras. how about a 3D, Open Sourced, free camera? 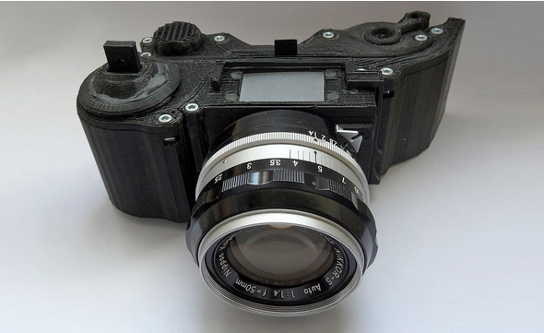 Gizmodo reported this week on this cool project: “Despite the fact that many camera manufacturers have stopped producing non-digital SLRs, fans of film-based photography should be happy to hear that they’ll be able to 3D-print a replacement should their beloved hardware ever fail. The OpenReflex camera was created by Léo Marius, a recent design graduate who’s posted the plans and everything you’ll need to make your own over on Instructables — well, everything except a 3D printer.

The OpenReflex accepts standard 35mm film and should work with any lens, but since the camera’s plans are provided, ambitious photographers can modify it in any way they see fit. Material costs come to about $30, including the plastic, the internal mirror, and enough Sugru to ensure the entire housing is lightproof. And the camera’s various components only require about 15 hours to print, so even if you don’t have a 3D printer of your own, renting one for the task shouldn’t be too expensive.

Photos taken with the OpenReflex have a look and feel similar to what you’d get from one of Lomography’s cameras, but over time as the design is refined and perfected, the image quality and results can only get better and better. So thanks to Marius’ creation SLRs could endure forever, but only if we find a way to way to 3D-print cheap film stock too.”