I was thinking about the Galaxy Note II, so this phone was cheaper, and I think, cooler! And, despite what Soldier says in the review about the cameras, I love them! They test out very well for me!

Now, you can be sure that your drives are securely wiped of data!

“What is Full Wipe?
Full Wipe is a powerful tool which can fully wipe all data from your memory cards, USB sticks, removable HDDs, HDDs or even floppy!
All data will be UN-RECOVERYABLE!

How Full Wipe works to make sure all data are fully wiped?
Normal delete or format will only mark these files to ‘deleted’ status, the real data are still in the device. Full Wipe will re-write as much empty data as possible to overwrite the real data. Even Hackers restore the data the files are useless.” 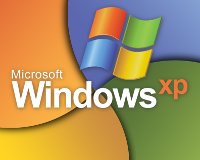 Surely no one that reads the Dr. Bill Blog is still on Windows XP?!? I hope not. It is time to move on, people!

Your perilous future on Windows XP

Larry Seltzer for ZDNet – “An older relative (a really frugal but sharp guy in his 80’s) once bemoaned to me about the scam in the computer industry pushing people to upgrade all the time. ‘Why’ (I’m paraphrasing here) ‘should I upgrade a computer which does what I want it to do?’

We’re coming up on one really good answer to his question. As Mary Jo Foley reported the other day, Microsoft is stepping up their warning campaign about users still running Windows XP, which will reach end of life on Patch Tuesday, April 8, 2014.

Security is the reason my relative doesn’t appreciate for why running old software is often an inherently bad idea. Security technology in Windows XP was never really that great, even if it got a lot better with SP2, but the product was a runaway smash hit to such an extent that we may never be rid of it. Next April will be 12 years since Windows XP was made generally available; this is an astonishingly long time to keep supporting a software product. Nobody else keeps support life spans like Microsoft; with Windows XP they actually extended the normal 10 year life by 2 years, a move I consider a grave error. In fact, they should seriously think about cutting the 10 year standard down.

Partly as a result of their policies and partly because of people like my relative, Windows XP is still a massive presence in the market, and it’s a massive target of attack. So are later versions of Windows, but those versions are far better able to defend themselves against attack. See the stats in this blog entry by Microsoft’s Tim Rains which explains just how much more vulnerable to breach XP is than Vista, Windows 7 and especially Windows 8. Imagine how vulnerable it will be when you can’t even get patches for critical vulnerabilities anymore. Only a fool would rely on it.

One point Rains didn’t make that I think is worth emphasizing: If you’re using Internet Explorer on it, and I bet many XP users are, you are stuck with a version that will soon be 3 generations old and without critical updates anymore. Don’t keep using XP but, if you do, use Chrome or Firefox. (This reminds me of the old line ‘Don’t stick your hand in the garbage disposal but, if you do, use your left hand.’)

Some other points: If you’re on XP and you care about updates you’re probably using Windows Update, and therefore automatically running the Malicious Software Removal Tool every month. Not any more after April 2014.

And it’s not exactly a wave yet, but more and more software is not supporting XP, or at least not well. You can make a good case that this is irrelevant, since the users sticking with XP are likely sticking with the software they already have, but it’s another thing to consider.

One thing you don’t have to worry about is antivirus support. I asked Kaspersky about their plans for XP. Elliot Zatsky, Senior Director of Consumer Partner Services at Kaspersky Lab said that about 20% of their user base is still on Windows XP (!). It’s slowly trending down and they expect, as a result of the end of XP support and the release of Windows 8.1, their XP decline will ‘increase slightly and continue on this steady downward trend for a few years.’ Zatsky says the company plans to include support for Windows XP in their 2015 product line and, therefore, for at least 2 more years.

I also asked whether the inevitable increase in unpatched vulnerabilities on systems makes it harder for antivirus to do its job. Obviously this increases the chance that a system will be infected in some way, but Zatsky says that their multiple layers of protection should catch any malware in real time even if it is trying to exploit a vulnerability.

I think they may be a bit optimistic with that last point. Things will certainly get worse for Windows XP. Once there are no more patches, demand for vulnerabilities may increase considerably. It wouldn’t surprise me if some are being stockpiled for next year; it’s a risk since someone else may discover it, but if you release an exploit for which there will be no patch, users will be helpless.

You out there, the one running XP! That’s you I’m talking about when I say ‘helpless.’ When the new models show up for the holidays it’s time to go computer shopping.”

Geek Software of the Week: Redo Backup and Recovery!

The Geek Software of the Week is truly useful and handy! Check out the features, and keep in mind that all this is completely free and Open Source!

“Redo Backup and Recovery is so simple that anyone can use it. It is the easiest, most complete disaster recovery solution available. It allows bare-metal restore. Bare metal restore is not only the best solution for hardware failure, it is also the ultimate antivirus: Even if your hard drive melts or gets completely erased by a virus, you can have a completely-functional system back up and running in as little as 10 minutes.

All your documents and settings will be restored to the exact same state they were in when the last snapshot was taken. Redo Backup and Recovery is a live CD, so it does not matter if you use Windows or Linux. You can use the same tool to backup and restore every machine. And because it is open source released under the GPL, it is completely free for personal and commercial use.

Redo Backup has the most features coupled with the simplest, most user-friendly interface:

I have a Box account, however, I don’t use it as much as my DropBox account. However, I may have to look at it again!

“Box introduced some big changes to its pricing model on Wednesday, adding a few new schemes — not to mention a (bigger) freebie.

The free storage space option for individual users is getting bumped from just 5GB to 10GB.

The next level up is a new $5 plan dubbed ‘Starter.’ Aimed at teams as well as small businesses, this option supports up to 10 users with 100GB to share.

The $15 per user Business plan remains relatively unchanged with up to 1000GB of cloud storage space to share with three or more colleagues.

Moving higher up the scale, things are being shifted around a bit for Box’s core user base: the enterprise.

Aptly named ‘Enterprise,’ the fourth subscription plan consists of unlimited cloud storage space with a 5GB file size upload limit at a rate of $35 per user.

The top-tier selection is referred to as ‘Elite.’ Much like luxury goods that simply come with taglines saying ‘Price Available Upon Request,’ this is a customized cloud platform plan that lacks a standard (let alone publicized) cost. The amenities include unlimited storage space, no limits on file sizes when uploading, a free test environment, and unlimited use of Box Content APIs.

Certainly, the business world has been Box’s primary target up to this point, separating it from Dropbox, Google Drive and similar personal cloud storage offerings.

But the bottom two plans (extra free space plus the Starter option) are bound to draw more attention away from those competitors too.”

Roku is now Number 1 in usage! Explore the TARDIS Control Room with Google Maps! A ‘walk-through’ of my Chromecast and how to use it!

Start the Video Netcast in the Blubrry Video Player above by
clicking on the “Play” Button in the center of the screen.
(Click on the buttons below to Stream the Netcast in your “format of choice”)
(Right-Click on any link above, and select “Save As…” to save the Netcast on your PC.)
Available on YouTube at: https://youtu.be/4AL01BysS6I
Available on Vimeo at: https://vimeo.com/72588708

Roku is now Number 1 in usage! Explore the TARDIS Control Room with Google Maps! A ‘walk-through’ of my Chromecast and how to use it!

Start the Video Netcast in the Blubrry Video Player above by
clicking on the “Play” Button in the center of the screen.
(Click on the buttons below to Stream the Netcast in your “format of choice”)
(Right-Click on any link above, and select “Save As…” to save the Netcast on your PC.)
Available on YouTube at: https://youtu.be/4AL01BysS6I
Available on Vimeo at: https://vimeo.com/72588708

My Chromecast is Here!

It came in yesterday, and I immediately opened it up and played with it! DEWD! It is cooler than I had hoped! I will be doing a full demo on the next show… so stay tuned!

Time and Relative Dimension in Space (TARDIS), oh yeah! You can explore it via Google Maps, just click this link. Then, click on the “double-arrows” at the bottom of the screen at the Call Box. 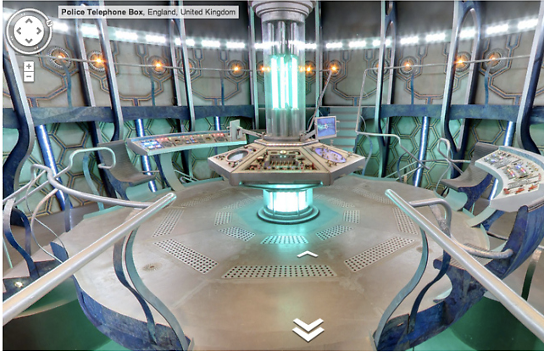 “Gasp! I would’ve had this post written 20 minutes ago, but I was too busy geeking out.

Tucked away in a single street view image of what appears to be a mere police box, a newly discovered Google Maps easter egg lets you go inside the TARDIS.

This is cool! Geek out, for sure!

Roku is Now the Most Utilized Streaming Device, as of Q1 2013! 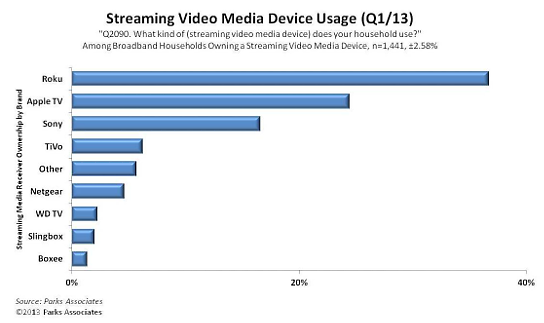 So, as of first quarter 2013, Roku is the most used device for streaming. This image was posted on their Facebook feed. Pretty cool! Way to go, Roku!