A New Look for Firefox!

Mozilla has released a new version of Firefox, version 29. It was announced today, and has new customization options, and a new cleaner, more modern look!

It also has an updated sync feature that allows you to add multiple devices on to your Firefox account on Windows, Mac, Linux, and Android.

Upgrades include the ability to customize a “swipe-able” history, top sites, bookmarks and the reading list home screen pages and you can also choose one to make your mobile default page.

You would need to go to the Mozilla website and download the new Firefox version which comes is a stub file, and then downloads the rest of the files to install, and or upgrade your existing version.

It’s official, gang! The cast for Star Wars VII has been announced!

Director J.J. Abrams says, ‘We are so excited to finally share the cast of Star Wars: Episode VII. It is both thrilling and surreal to watch the beloved original cast and these brilliant new performers come together to bring this world to life, once again. We start shooting in a couple of weeks, and everyone is doing their best to make the fans proud.’

Star Wars: Episode VII is being directed by J.J. Abrams from a screenplay by Lawrence Kasdan and Abrams. Kathleen Kennedy, J.J. Abrams, and Bryan Burk are producing, and John Williams returns as the composer. The movie opens worldwide on December 18, 2015.”

The Banana Pi – Want a Bite? 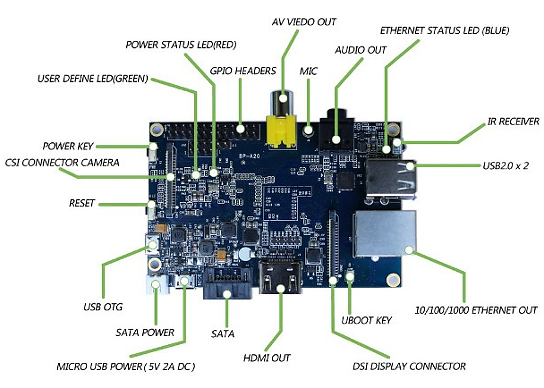 I do! Faster, higher memory, and a neat little toy! I NEED one!

Banana Pi: The next generation of single-board computers?

ZDNet – By Steven J. Vaughan-Nichols – “The maker community loves the Raspberry Pi Single Board Computer (SBC). But, the $35 Raspberry Pi, which was introduced in 2012, with its 700MHz ARM11 processor and 512MBs of RAM, is looking a little dowdy these days. So, Lemaker.org has introduced the faster Banana Pi.

Before launching into the technical details, you should know that the Banana Pi is not, in way, shape, or form, an official successor to the Raspberry Pi. It’s a Raspberry Pi clone from a Chinese educational group. That said, with its 24-pin header layout, the Banana Pi is designed to be mechanically and electrically compatible with Raspberry Pi add-on modules.

This new credit-card sized SBC costs just over $74 after shipping. That’s a good deal more than the $35 Raspberry Pi Model B it takes after. On the other hand, Banana Pi comes with a dual-core, Cortex-A7-based Allwinner A20 system-on-chip running at 1GHz,. That’s much faster than the Raspberry Pi’s 700MHz, ARM11-based Broadcom BCM2835 processor. It also includes a more powerful Mali-400 GPU.

The Banana Pi also comes with 1GB of RAM and built-in Ethernet that can handle up to 1Gbps (Gigabit per second). That’s ten-times as fast as the Raspberry Pi. This brand-new SBC also includes a SATA port and a micro-USB port. It’s also, at 92 x 60mm, a trifle larger than the 85 x 56mm Raspberry Pi.

In theory, the Banana Pi should run all of the software that Raspberry Pi can run In practice, Lemaker only states that their SBC can run Android 4.4, Ubuntu, Debian, Raspberry Pi Image, and the Cubieboard Image. On top of the operating system, the only application the group claims that it will run is Scratch, an educational program from MIT.

This is a very new product from a little-known group, so it’s hard to say if will prove just a flash in the pan or a long-term project. The group does have what appears to be a useful quick start guide and active online forums. So, if you want to try your hand at mini-computing with a more powerful system than the Raspberry Pi, I think it’s both supported and cheap enough to give it a try. Enjoy!”

Save Yourselves and Your Friends!

I’ve told everyone I have known for years, and years, that Microsoft Internet Explorer is not safe to use. It has ALWAYS been unsafe. Google Chrome, Mozilla Firefox, or Opera are FAR safer.

But now, even the US government, and even the UK government, are telling us all to forgo using Internet Explorer! It was announced today that the Computer Emergency Readiness Team (CERT) is encouraging us to STOP using IE!

The flaw that was found by security firm FireEye is being used with a known Flash-based exploit technique to attack financial and defense organizations in the US via Internet Explorer 9, 10, and 11.

55% of the Internet still uses Internet Explorer and are now at risk. Don’t be a follower of the Evil Empire. Be a leader! Tell your friends to save themselves from Microsoft’s unsafe browser!

I strongly encourage you to use Google Chrome. It is free, and it is more secure than any other browser. Let’s be safe out there!

Doing the show from a hotel room! Microsoft is expanding their online Office to to Chrome, a viewer listens to the Doctor and switches to Linux Mint, Ubuntu 14.04 LTS (Long Term Support) is out, losing rights by ‘liking’ a company, GSotW: TrimCheck

Start the Video Netcast in the Blubrry Video Player above by
clicking on the “Play” Button in the center of the screen.
(Click on the buttons below to Stream the Netcast in your “format of choice”)
(Right-Click on any link above, and select “Save As…” to save the Netcast on your PC.)
Available on YouTube at: https://youtu.be/WdTPVT38TRg
Available on Vimeo at: https://vimeo.com/92483602

Doing the show from a hotel room! Microsoft is expanding their online Office to to Chrome, a viewer listens to the Doctor and switches to Linux Mint, Ubuntu 14.04 LTS (Long Term Support) is out, losing rights by ‘liking’ a company, GSotW: TrimCheck

Start the Video Netcast in the Blubrry Video Player above by
clicking on the “Play” Button in the center of the screen.
(Click on the buttons below to Stream the Netcast in your “format of choice”)
(Right-Click on any link above, and select “Save As…” to save the Netcast on your PC.)
Available on YouTube at: https://youtu.be/WdTPVT38TRg
Available on Vimeo at: https://vimeo.com/92483602

Geek Software of the Week: TrimCheck

From LifeHacker – Make Sure TRIM Is Enabled for Your Solid State Drive in Windows 7 for Better Performance By: Whitson Gordon

“One of the best ways to take full advantage of your solid state drive (SSD) is to use the performance-maintaining TRIM command. Technology blog GHacks shows us how to make sure TRIM is enabled in Windows 7.

While using something like Intel’s previously mentioned Toolbox application to TRIM your drive is extremely useful, you need to make sure Windows 7 has enabled it first. And, while Windows is designed to automatically detect most SSDs, sometimes it doesn’t work as intended. If you find the

performance of your SSD is degrading (or just want to make sure TRIM is properly enabled), run Command Prompt as an administrator and type:

It will give you one of two results, either a 0 or a 1. A zero indicates that TRIM is enabled correctly, a one means that it is not. If you have a TRIM-compatible SSD, but find that Windows 7 hasn’t enabled the command, you can easily do so by running this command:

Note that TRIM is only supported in Windows 7, so if you have an SSD but are running an older version of Windows, it’s probably a good idea to upgrade.”

This week’s GSotW is “TrimCheck” a tool to test whether TRIM is enabled when you have a solid state drive.

“This program provides an easy way to test whether TRIM works on your SSD. It uses a similar method to the one described here, but uses sector calculations to avoid searching the entire drive for the sought pattern. It also pads the sought data with 32MB blocks of dummy data, to give some room to processes which may otherwise overwrite the tested deleted disk area.

The program will set up a test by creating and deleting a file with unique contents, then (on the second run) checks if the data is still accessible at the file’s previous location.”

Lose Rights by “Liking” a Company?

A disturbing trend showed up this week in the cyber world concerning companies and the fine print that they’re putting into their privacy policies on their websites. They’re basically making it possible to deny a customer’s right to sue the company based on the users “consent” which they unknowingly give when they “like” a brand on Facebook.

The idea is that any favorable interaction with the company or its products that confers a quote “benefit” to the consumer is treated as an acceptance of the company’s terms, which includes a waiver of any legal rights against the company.

The bottom line to you as a consumer is that you should carefully read any explanations on company websites if you’re concerned about losing these kinds of rights.

A New Long Term Support (LTS) Version of Ubuntu is Out!

Ubuntu 14.04 will be the first version of Ubuntu to provide the operating system for commercially available tablets. “Trusty Tahr,” or version 14.04 will be a long-term support edition for desktops and servers.

Canonical CEO Jane Silber said Ubuntu 14.04 for desktops “would be a good option for businesses considering a switch from Microsoft, and specifically those replacing XP or Windows 7 as they come to end-of-life.” It would be nice to think that businesses would seriously consider such a switch, but I think they would be fairly forward thinking to consider it. Sadly, there are many businesses willing to take a chance of having an open source operating system upon which to base their business. Those that do decide to make the switch, more power to them!

Ubuntu is based on Debian Linux but also forms the basis of other operating systems including the popular Linux Mint desktop.

A Viewer Takes the Doctor’s Advice!

This is a message from a viewer of the Netcast, that also goes to my church… check it out!

“Hi, Dr. Bill… just a FYI that I took your advice from your most recent computer show and converted an old XP PC we have over to Linux Mint. The hardest part for me was getting the .iso file on to a DVD… but, I found and downloaded a free program that helped me with that. I installed the ‘Cinnamon’ version and it works like a champ! This particular PC is the oldest one in the house and I have only been using it for searching for Praise and Worship music for the worship team, then formatting and printing it. This Linux version came with LibreOffice and Firefox for the browser… which all works great! Thanks for the tip and for helping us breathe some new life into an older (but still working) PC.”