Do You Want to Open Your Wi-Fi to your Neighbors? 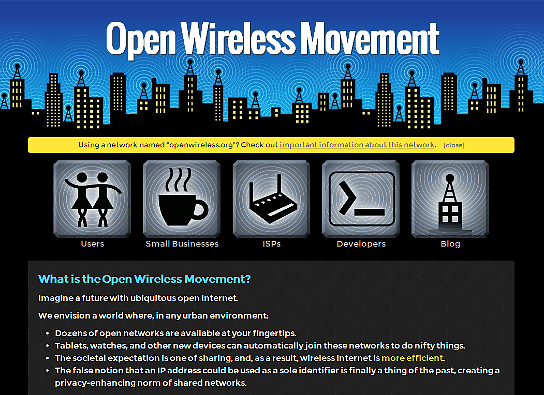 This is an interesting idea… they say that “information desires to be free!” And, it gets us closer to ubiquitous WiFi!

Wired – By: Andy Greenberg – “In an age of surveillance anxiety, the notion of leaving your Wi-Fi network open and unprotected seems dangerously naive. But one group of activists says it can help you open up your wireless internet and not only maintain your privacy, but actually increase it in the process.

At the Hackers on Planet Earth conference next month, the Electronic Frontier Foundation plans to release software designed to let you share a portion of your Wi-Fi network, password-free, with anyone nearby. The initiative, part of the OpenWireless.org campaign, will maintain its own flavor of free, open-source router firmware called Open Wireless Router. Good Samaritans can install this firmware on a cheap Wi-Fi router, creating a public slice of bandwidth that can dialed up or down with a simple smartphone interface.

‘We want to encourage a world of open wireless, sharing Wi-Fi with each other for privacy, efficiency, and innovation in devices that don’t have to fall back on subscriptions to wireless carriers,’ says EFF activist Adi Kamdar. Many locked wireless networks sit idle for much of the day, Kamdar argues. OpenWireless.org would put that untapped bandwidth to use while still allowing the router’s owner to take priority when needed, limiting freeloaders to as little as 5 percent of the pipe.

And just how does opening your network protect privacy, as Kamdar claims? One goal of OpenWireless.org, says EFF staff attorney Nate Cardozo, is dispelling the legal notion that anything that happens on a network must have been done by the network’s owner. ‘Your IP address is not your identity, and your identity is not your IP address,’ Cardozo says. ‘Open wireless makes mass surveillance and correlation of person with IP more difficult, and that’s good for everyone.’

For anyone wary of home invasions by similarly misguided cops, OpenWireless.org says it will at some point integrate an option to route guest traffic over the anonymity software Tor or a VPN that ties it to a different IP address. But Cardozo hopes the open routers will for most users cement the idea that network owners aren’t responsible for passersby who use their connection. ‘If everyone runs open Wi-Fi, there’s no real argument that anyone is being negligent by doing so,’ he says. ‘If you’re not the person doing the illegal activity, you have no liability.’

OpenWireless.org won’t be the first attempt to create a network of open guest access points. But others who have tried the strategy, like the Spanish company Fon and British Telecom, have required users to be subscribers or pay for access. The EFF’s option will be free for all.

The first version of the software is to appear on OpenWireless.org in mid-July. The initial download will be compatible with one specific cheap Wi-Fi router that the OpenWireless developers declined to reveal until the HOPE talk. If the idea catches on, the group says it will eventually update the firmware to work on other models and eventually offer its own router with pre-installed hardware.

Anyone wishing to use the initiative’s free Wi-fi hotspots should search for networks called ‘OpenWireless.org,’ the label the project is encouraging people to give their networks. For guest users, the router software is also designed to offer better-than-average security: Each user’s link will be individually encrypted with a protocol called EAP-TLS, the equivalent of HTTPS on every connection. The price of that encryption, however, is that users must download a certificate from OpenWireless.org before accessing the free networks, a tradeoff that will no doubt limit use in favor of privacy. ‘Part of the goal here is to make open Wi-Fi as secure as logging on to a private network,’ says Ranga Krishnan, an EFF technology fellow working on the project.

Network owners may ask what incentive beyond altruism might motivate them to share limited Wi-Fi resources with strangers. The Open Wireless Router creators argue their software will be more convenient and secure than the buggy default firmware in typical Netgear and Linksys devices. Unlike those rarely-updated devices, the OpenWireless.org router firmware will be security-audited and allow users to check for updates on the devices’ smartphone-friendly web interface and quickly download updates. ‘We want to get a much better router in peoples’ hands that will improve their overall experience and security,’ says Krishnan.

Krishnan argues that users also will benefit, both personally and on a societal level, from the barrier to surveillance that comes from sharing their network with strangers. ‘This is not just a neighborly good thing to do,’ he says. ‘If you allow this kind of guest usage, it will make your traffic part of the mix and not associated with you. That gives you some protection.’

But Kamdar points instead to security guru Bruce Schneier’s famous argument that despite the security risks, leaving your Wi-Fi open is an act of civic hospitality. ‘To me, it’s basic politeness,’ Schneier wrote in 2008. ‘Providing internet access to guests is kind of like providing heat and electricity, or a hot cup of tea.’

Given the kind of widespread network surveillance that’s been revealed in the years since Schneier wrote that line, no one would be considered rude for keeping their network locked down. With the right tools and protections, though, sharing Wi-Fi might become as common as any other baseline social kindness. ‘For some users,’ Kamdar says, ‘A smile from a friend or neighbor is incentive enough.'”