Have You Ever Been Emailed a Wrench? 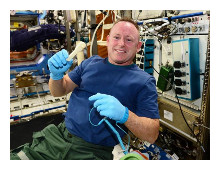 How about a wrench emailed to space? Yes!

ISS astronaut needs a wrench, NASA successfully ’emails’ him one

c|net – By: Anthony Domanico – “We’re finally starting to see the benefits of having a 3D printer aboard the International Space Station, as NASA and Made in Space basically emailed a ratcheting socket wrench to astronaut Barry Wilmore.

Before 3D printing, if astronauts needed something that wasn’t already aboard the ISS, they would have to wait several months for the next shuttle to arrive. Now scientists and engineers on the ground can design whatever the astronauts might need, and send the file directly to the 3D printer aboard the ISS to be printed and used immediately. A post on Medium by Made in Space co-founder Mike Chen outlines the process.

Made in Space is the group created to design, build and ultimately send a zero-gravity 3D printer to the ISS. The company heard that Wilmore needed a ratcheting socket wrench and fired up its CAD (computer-aided design and drafting) software and designed one. Once the design for the wrench was complete, they converted it to a 3D-printer-ready format called G-code, and sent it over to NASA, which beamed it up to the ISS where it was printed automatically.

The wrench, as well as the 20 other objects that have been 3D-printed on the ISS thus far, will be sent back to Earth for further analysis. Made in Space plans to compare these 21 objects to identical 3D-printed objects that were printed on Earth to test things like the effect of long-term microgravity on the 3D-printing process, so they can model and predict how well things printed in space will hold up in the future. From there, they can further enhance their 3D printer and printing technology to build better objects for use in space.

So now that scientists have successfully emailed plans for an object to be 3D-printed aboard the ISS, it’s only a matter of time before they figure out how to Snapchat or Yo the designs to space.”