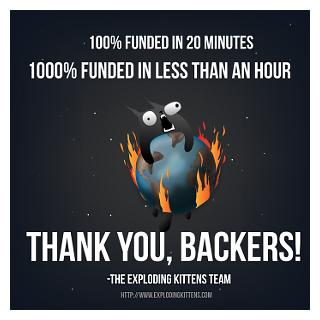 Tech Times – By: Steven Schneider – “Kickstarter has proven that anyone with a good idea can get the funding they need for their dream (or potato salad). Yes, there are stories of projects going unfunded due to lack of coverage, but there are far more tales of success than failure.

Of course, there are varying levels of success. Some projects just barely make their funding goal by the time the deadline passes, while others see success within minutes. One such projects is the ‘Exploding Kittens’ Kickstarter: a card game by the creator of ‘The Oatmeal’ webcomic, the project was funded within minutes of going public, and subsequently raised over a million dollars in less than an hour.

Many people would expect such success to slow down a bit once the project was successfully funded – and those people would be wrong. Exploding Kittens now holds the record for most number of backers, and is currently sitting at over $4.6 million dollars raised.

Considering the project was only asking for $10,000 to get going, the fact that Exploding Kittens has raised such a ridiculous amount of cash is amazing. The project hasn’t lost any of its initial momentum, and with three weeks left to go, there’s no telling how much money the project will ultimately raise. If the rate of donations stays the same, the team could raise upwards of $15 million.

Then again, it’s not as if all of that money is profit: most of it will be used to manufacture and distribute the cards themselves, and with nearly 120,000 backers, that’s a lot of cards. On top of that, the cards are expected to be released this summer, so there’s only a few months to put everything together.

Even so, there’s not much you can’t do with $4.6 million dollars, so getting everything together by June shouldn’t be much of an issue.

For all of the details on the project, check out the official Kickstarter page.”