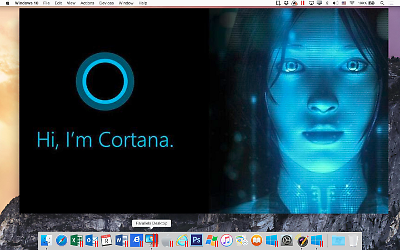 Parallels 11 allows you to run Windows 10 on your Mac!

c|net – By: Sarah Mitroff – “Parallels, the software program that lets you run OS X and another operating system side-by-side on a Mac computer, is getting an upgrade. Version 11 ushers in support for the two newest OSes in 2015; Windows 10 and the forthcoming OS X El Capitan. It also promises to be much faster (up to 50 percent in some cases) than the versions before it.

Parallels Desktop for Mac is a virtualization system that has been letting people run Windows and other operating systems on their Macs for years. The system can run different operating systems without requiring separate computers for home and work. It also allows software developers to protect their host computers by isolating possible viruses to the affected operating system.

You’ll also be able to use Windows 10’s always-on Cortana feature, where you can ask Microsoft’s digital personal assistant for directions, restaurant recommendations, sports scores and more, even when you’re in OS X. Finally, a new Travel Mode tells your Windows OS to use less power when you’re away from a charger, giving you better battery life for your Mac.

The Pro version is brand-new this year and it’s built for developers with support for Docker, Visual Studio, Chef and other developer tools. The Business Edition is for IT departments, with built-in administrative features to manage other machines running Parallels, plus extended support from the company.

We are revisiting Piriform’s Speccy, because it has been updated, and because it has a neat feature you can use after the Windows 10 update to find your Windows 10 license string, in case you need to re-install!

“See what’s inside your PC

Speccy is the place to start if you need to know what’s inside your PC. See a quick summary, or dive deeper into every aspect of your PCs hardware so you can make informed upgrade and purchasing decisions.

Speccy gives you detailed information on every piece of hardware in your computer. Save time trawling through your computer for stats like CPU, motherboard, RAM, graphics cards and more. See everything laid out for you in one clean interface.

See real-time temperatures of critical components so you can easily spot problems before they occur.

Speccy allows you to save your scan results directly as a snapshot, XML or text file for easy sharing. Handy for making sure your new computer has the right specs, or if tech support need to diagnose an issue with your computer.”

Now you can share one Echo between multiple accounts… THAT is cool, because my wife has Prime!

ZDNet – By: Kevin Tofel for Mobile Platforms – “The Amazon Echo got a little more useful on Friday both for families and for those who live in the San Francisco Bay, California area.

To use it, first enable the Skill in the Amazon Alexa app and then say, ‘Alexa, open Bart Times.’ Alexa will first ask for your home and destination BART stations.

To test the process, I chose South San Francisco and Montgomery Street. Alexa then told me when the next three trains depart and arrive between the two.

While that’s useful, not everyone lives in the Bay Area. For everyone else, Alexa can now play audiobooks and music from multiple Amazon accounts. Until now, the Echo was tied to content from a single account.

Again, using the Amazon Alexa companion app, you simply add a second Amazon account to the Household Profile setting. Once that’s done, simply say, “Alexa, switch accounts” to flip between them. You can also ask ‘Alexa, which account is this?” to determine the one currently in use.

It may sound like a trivial change but the multiple account support will be welcomed by many. Amazon’s Echo can surely be used by a single person but since it works with one universal interface — voice commands — it’s useful in a household with several people.

Not everyone wants to listen to the same music or audiobooks in a home, however, which makes the new account switching support so handy.”

Upgraded to Windows 10? Don’t Use OneDrive!

If you use Microsoft’s Cloud Storage OneDrive, and you run it on Windows 10, you may find that you can no longer save items to your own Documents folder! If you asks you for Administrative permission, you have been “got” by this bad OneDrive bug! Until Microsoft patches this issue… AVOID OneDrive! If, like me, you already have this issue, go to the OneDrive icon in your tray, open OneDrive properties and select the option to disable OneDrive on startup. OK this, and then Right-Click on and close OneDrive. Then, reboot.

Still can’t get in to Documents? You can try this… but it is only for the brave. Right-Click on your Documents folder, and select Security, then wait until you see the HomeUsers Group show up, once you do, click on Advanced in the lower right corner of the screen, and grant the HomeUsers Group Full Access. PLEASE BE CAREFUL! This is only for the brave, and maybe the slightly crazy! It is best to to save elsewhere until Microsoft comes up with a patch.

Star Trek: Renegades Started This Week on YouTube… And…

Maybe they will take this start, and develop something from it. I WANT Star Trek: Renegades to be great Star Trek. It just wasn’t – yet.

And, here’s their web site:

And, worry not… Star Trek: Axanar is coming, see the preview:

Adobe Flash malware has been taking over. So, Google is fighting back!

VentureBeat – By: Emil Protalinski – “Google has been working with Adobe to make Flash content more power-efficient in Chrome. In March, a setting was introduced to play less Flash content on the page, but it wasn’t turned on by default, and in June, the option was enabled in the browser’s beta channel. Google also hinted that all users would get the feature as soon as next month, and today the company confirmed it would start rolling it out on September 1.

Here’s how the feature works. Chrome will automatically pause Flash content that isn’t ‘central to the webpage’ while keeping central content playing without interruption. For example, the video you’re trying to watch will be unaffected while animations on the side will be paused. If Chrome pauses something you’re interested in, you can resume playback by just clicking on it.

Over the last few months, Google has admitted the feature would pause a lot of plugin content, including ‘many Flash ads.’ The goal, according to the company, is to increase page-load speed and reduce power consumption, though it hasn’t shared any hard data on what kind of improvements users can expect.

While the majority of Google’s revenue depends on ads, and many are still delivered in Flash, this move is part of a broader effort to ditch the insecure and slow technology. In January, YouTube ditched Flash for HTML5 by default, and in February, Google started automatically converting Flash ads to HTML5. Now it’s Chrome turn to join the party.”