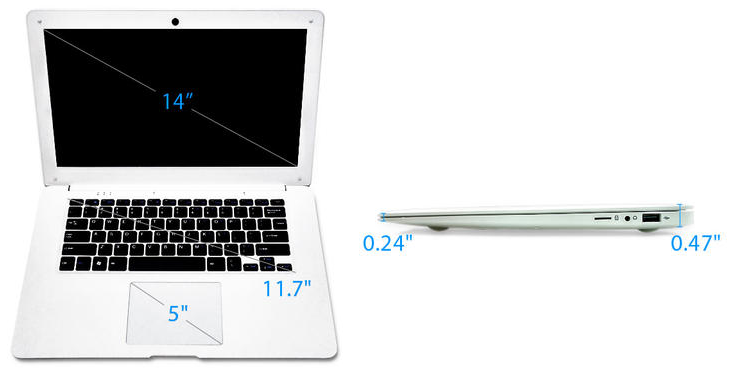 This laptop is based on the Raspberry Pi competitor, Pine64. I want one.

ZDNet – By: Liam Tung – “The makers of a popular Raspberry Pi challenger, the $20 Pine A64, have returned with two sub-$100 Linux laptops, called Pinebooks.

The Pine A64 stood out among developer boards because it was cheap and relatively powerful, helping its maker raise $1.7m on Kickstarter last year with just a $30,000 target.

With an Allwinner quad-core ARM Cortex A53 64-bit processor, the A64 board could run Ubuntu, Debian, or Android Lollipop 5.1. The same processor is powering the 11-inch and 14-inch Pinebook notebooks, which at $89 and $99 respectively, could become some of the cheapest laptops available.

The displays on both models have a 1,280 x 720-pixel resolution, and besides the A64’s ARM processor, the Pinebooks include the basics needed for a functional laptop, including display, keyboard, touchpad, storage, memory, and ports.

CNX Software, which first reported the new laptops, notes that the Pinebook’s system on a chip (SoC) includes a Mali-400MP2 GPU. Also, while the machines will run all operating systems supported by the A64 boards, the firmware needs to be modified due to the LPDDR3 RAM. The devices should support the Remix OS Android fork.

While the new netbooks share a common system on a chip, CNX notes that the new laptops aren’t actually based on the A64 board itself, but rather on a custom board that’s designed to keep the laptops thin.

The devices aren’t actually for sale yet, but would-be buyers can register to be told when sales commence.”

We are getting close to being able to drop cable and get cable channels via Internet Streaming!

While AT&T repeatedly emphasized the simplicity of the offering, the devil is in the many details, and consumers may have a hard time deciding whether or not it’s worth switching from cable or satellite. For one thing, the company hasn’t announced full channel lineups for each tier. Promotional materials show that the lowest tier includes several of the most popular basic cable channels, such as AMC, FX, Bravo, CNN, E, and A&E. Channels added in the next three tiers seem to be far less popular, but the second tier adds access to two regional sports networks (RSNs).

Subscribers will be able to access two concurrent streams. DirecTV Now will support iOS and Android devices, Apple TV, Chromecast (on Android), and Amazon Fire TV and Stick at launch. Support for Roku, Amazon Fire tablet, and Chromecast on iOS will come sometime in 2017. The company didn’t mention gaming console support at all. AT&T will provide a limited amount of free content through the DirecTV Now app to give people a sample of what’s available.

Besides live channels, DirecTV Now will include a video-on-demand library of 15,000 titles. The interface emphasizes live content, but doesn’t allow live video pause. The service won’t offer a cloud DVR at launch, but will add the feature in 2017. Viewers will be able to catch up on programming they missed with the 72-hour lookback feature, but that won’t be long enough for some viewers. The service won’t support 4K video or 5.1 audio at launch.

According to AT&T Entertainment Group CEO John Stankey, who spoke at the launch event, customers with poor credit are a major obstacle for satellite TV providers, and 20 million U.S. homes are locked out because of their credit. DirecTV Now gives them an option, as it doesn’t require a credit check. The company doesn’t send out a monthly bill, but simply draws from the customer’s debit card.

AT&T will offer several incentives for new customers. Those who pre-pay for three months can get an Apple TV for free, while those who pre-pay for one month can get a free Amazon Fire TV Stick. Some LeEco TVs and phones will include free service for a limited number of months. Consumers will be able to test the service out with a 14-day free trial.

DirecTV will provide targeted ad opportunities, which the company says is essential for keeping costs down. There’s no ad-free option, and subscribers certainly won’t be able to skip ads.

Other details consumers will need to pay attention to involve live local and sport programming, where AT&T was not able to simplify rights. DirecTV Now will offer content from ABC, NBC, and Fox at launch, but not CBS. Viewers will only be able to watch live broadcast programming in areas where those three networks own and operate the local affiliate stations. Subscribers in other areas will need to wait a day for access. The service doesn’t support DirecTV’s NFL Sunday Ticket. Verizon has an exclusive on NFL mobile streaming, so that gives DirecTV Now a hole in its sports coverage.

With DirecTV Now, AT&T isn’t trying to sell just an OTT service, but a package of services. Streaming DirecTV Now video won’t count against AT&T customer data caps. New customers who sign up for wireless plans with messaging can get Fullscreen’s OTT service for free for one year, with data cap-free streaming. The announcement of data-free streaming has already angered net neutrality proponents.

Actress Reese Witherspoon was on hand to announce that in 2017 DirecTV Now will include an on-demand channel with content from her production company Hello Sunshine. AT&T also announced it will carry exclusive behind-the-scenes video from musician Taylor Swift.”