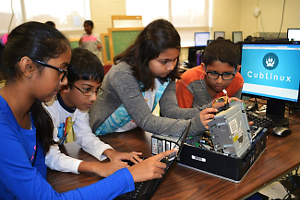 A Middle School innovates by teaching kids the exciting world of Open Source and Linux! A middle school’s Tech Stewardship program is now an elective class for science and technology students. (Image courtesy of Affordable Tech for All)

OpenSource.com – By: Don Watkins – “It’s nearly impossible to enter a school these days without seeing an abundance of technology. Despite this influx of computers into education, funding inequity forces school systems to make difficult choices. Some educators see things as they are and wonder, ‘Why?’ while others see problems as opportunities and think, ‘Why not?’

Andrew Dobbie is one of those visionaries who saw his love of Linux and computer reimaging as a unique learning opportunity for his students.

Andrew teaches sixth grade at Centennial Senior Public School in Brampton, Ontario, Canada, and is a Google Certified Innovator. Andrew said, ‘Centennial Senior Public School hosts a special regional science & technology program that invites students from throughout the region to spend three years learning Ontario curriculum through the lens of science and technology.’ However, the school’s students were in danger of falling prey to the digital divide that’s exacerbated by hardware and software product lifecycles and inadequate funding.

Although there was a school-wide need for access to computers in the classrooms, Andrew and his students discovered that dozens of old computers were being shipped out of the school because they were too old and slow to keep up with the latest proprietary operating systems or function on the school’s network.

Andrew saw this problem as a unique learning opportunity for his students and created the Tech Stewardship program. He works in partnership with two other teachers, Mike Doiu and Neil Lyons, and some students, who ‘began experimenting with open source operating systems like Lubuntu and CubLinux to help develop a solution to our in-class computer problem,’ he says.

The Tech Stewardship program is now an elective class for the school’s science and technology students in grades six, seven, and eight. Not only are the students learning about computer reimaging, they’re also giving back to their local communities through this open source outreach program.

A broad impact
The Tech Stewardship program is linked directly to the school’s curriculum, especially in social studies by teaching the United Nations’ Sustainable Development Goals (SDGs). The program is a member of Teach SDGs, and Andrew serves as a Teach SDGs ambassador. Also, as a Google Certified Innovator, Andrew partners with Google and the EdTechTeam, and Tech Stewardship has participated in Ontario’s Bring it Together conference for educational technology.

Andrew’s students also serve as mentors to their fellow students. In one instance, a group of girls taught a grade 3 class about effective use of Google Drive and helped these younger students to make the best use of their Linux computers. Andrew said, ‘outreach and extension of learning beyond the classroom at Centennial is a major goal of the Tech Stewardship program.’

What the students say
Linux and open source are an integral part of the program. A girl named Ashna says, ‘In grade 6, Mr. Dobbie had shown us how to reimage a computer into Linux to use it for educational purposes. Since then, we have been learning more and growing.’ Student Shradhaa says, ‘At the very beginning, we didn’t even know how to reimage with Linux. Mr. Dobbie told us to write steps for how to reimage Linux devices, and using those steps we are trying to reimage the computers.’

The students were quick to add that Tech Stewardship has become a portal for discussion about being advocates for the change they want to see in the world. Through their hands-on activity, students learn to support the United Nations Sustainable Development goals. They also learn lessons far beyond the curriculum itself. For example, a student named Areez says he has learned how to find other resources, including donations, that allow the project to expand, since the class work upfitting older computers doesn’t produce an income stream.

Another student, Harini, thinks the Tech Stewardship program has demonstrated to other students what is possible and how one small initiative can change the world. After learning about the program, 40 other schools and individuals are reimaging computers with Linux. Harini says, ‘The more people who use them for educational purposes, the more outstanding the future will become since those educated people will lead out new, amazing lives with jobs.’

Joshua, another student in the program, sees it this way: ‘I thought of it as just a fun experience, but as it went on, we continued learning and understanding how what we were doing was making such a big impact on the world!’ Later, he says, ‘a school reached out to us and asked us if we could reimage some computers for them. We went and completed the task. Then it continued to grow, as people from Europe came to see how we were fixing broken computers and started doing it when they went back.’